The pre-curtain announcement was not auspicious. With Diana Damrau having
already withdrawn from the production, suffering from a slipped disc, her
replacement Irina Lungu was now afflicted with a throat infection and
fever. One can imagine the frantic telephone calls and taxi rides that
ensued, as German soprano Mandy Fredrich was diverted from her planned
journey to Bonn – where she was scheduled to perform in Theater Bonn’s Elektra – to London City airport, where her plane touched down
just a couple of hours before curtain-up. With no time for rehearsal,
Fredrich was going to have to rely on the guidance offered during the
ensuing dash to Bow Street by the creative team who met her plane, and her
own experience of singing the role in Stuttgart and at the Wiener
Staatsoper.

We should not have worried. Fredrich negotiated the role with a calm
assurance, even though David McVicar’s 2004 production – now widely
travelled and here being revived for the fifth time (see

) – throws up plenty of surprises, not least the fact that this Marguerite,
having been entrusted to the care of the young, adoring SiÈbel by her
brother Valentin, on the latter’s departure for war, finds herself working
as a hostess in the Cabaret L’Enfer. One might be tempted to ask
what a nice girl like this is doing in a place like that, as
MephistophÈlËs’ acolytes scuttle about like crabs, turning sudden
somersaults, during the rambunctious revelries and burlesque excess.

For McVicar, updating the action to Second Empire Paris and the
Franco-Prussian war, relishes the almost schizophrenic quality of Gounod’s
sumptuous opera – which cannot seem to decide if it wants to be grand opera
or opera comique, as extravagant ballet collides with demi-caractËre roles
such as Marthe and MehistophÈlËs (the original production at the ThÈ‚tre
Lyrique in 1859 employed spoken dialogue).

McVicar draws on the dual aspirations of its composer who found himself
torn between the theatre and the church, and Charles Edwards’ designs spell
out the schism boldly. Stage right we have a replica of a luxurious box
from the Paris OpÈra; stage left the organ loft of Notre Dame. There’s a
prevailing Gothic mien but the palette switches back and forth from eerie
black and grey to camp crimson and gold, as McVicar whisks us from
cathedral to cabaret club, from sanctimonious ritual to saturnalian riot. 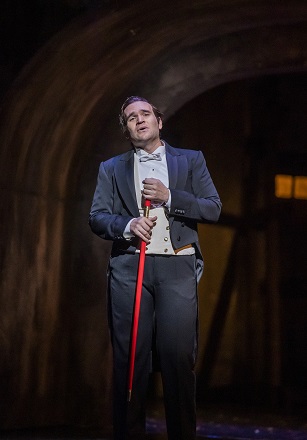 And, it works a treat in an opera in which the protagonist has been
stripped of the noble ambition bestowed on him by Goethe to ‘behold the
warp and the woof of the world’s inmost fabric’, albeit by questionable
means, and is obsessed not with the search for knowledge, experience and
truth but solely with desire to satisfying his lustful cravings. McVicar
seems to evoke the illusions which give both theatre and church their power
when he has his master magician, MephistophÈlËs, transform the aging Faust
into a debonair youth in front of a scuffed mirror in a backstage
dressing-room, and tap wine from Christ’s stigmata.

In the title role, Michael Fabiano did not really convince as the decrepit
scholar in Act 1, but the young seducer’s evening dress fitted him
perfectly, and he conveyed the complexity of Faust’s character, his voice
switching from tenorial sweetness to an almost baritonal darkness with
mercurial ease, just as a natty twirl of his red cane belied his
surprisingly timid courting of Marguerite. Fabiano held something in
reserve in the first two Acts, but his Act 3 cavatina, ‘Salut! demeure
chaste et pure’, sailed strongly and was beautifully phrased – although the
extended use of the head voice at the close was surely not idiomatic, the
top C disappearing into the ether rather than floating strong and true.

Fabiano’s Faust and Erwin Schrott’s MephistophÈlËs were a convincing duo,
equally debonair and dastardly. Looking more like Don Giovanni than the
Devil, Schrott stylishly donned his colourful personae – from matador to
master-of-ceremonies, from elegant man-about-town to tiara-wearing
transvestite – his plump, smooth bass-baritone oozing supreme nonchalance.
He sailed down to the lower reaches with the ease that MephistophÈlËs
slides through a trapdoor back to Hadean realms at the close. And, the
fiend’s menace was not born of cartoonish ‘evil’ or vocal ominousness but
in his very seductiveness. This MephistophÈlËs communed so companionably
among the folk that the stark flashes of the demonic took one by surprise.
No wonder that his disdainful dismissal of Valentin’s Crucifix-aping
crossed swords – they made a perfect mirror for the self-admiring Satan –
resulted in the collapse of the statue of Christ. Schrott’s cool
indifference and cackling delight were equally chilling. 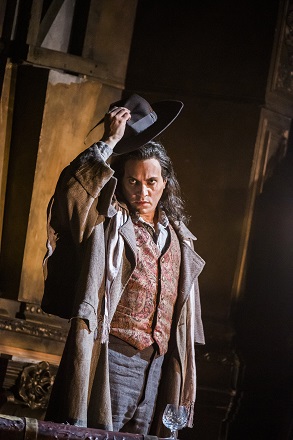 Fredrich betrayed no hint of nerves, warming up with a pure and gentle ‘Il
Ètait un Roi de ThulÈ’ – sung not in her garden but beneath the garret
where she would be seduced – and following it with a confident, sparkling
Jewel Song. Her soprano is not the largest, but it is true and tidy.
Fredrich did far more than just ‘save the show’. Had no announcement been
made, few would have realised that she was literally learning the
production on the hoof.

Conductor Dan Ettinger found the dark inkiness of the score – the clarinets
and bassoons of the ROH Orchestra excelled – but retained a winning
transparency, balancing dynamism with delicacy. The Chorus were on terrific
form.

Gounod’s Faust was the most commonly performed repertory opera in
Paris from its premiere in 1859 into the early twentieth century, seen 306
times at the Theatre-Lyrique from 1859 to 1868, and 500 times at the Paris
Opera between 1869 and 1887. Just 75 years after its premiere, it notched
up its 2000th outing in Paris. But, it is ‘of its time’: part
Christian melodrama, part dance-hall extravaganza, reflecting the
dichotomies of its age and its bourgeois audience. McVicar’s achievement is
to both accept and relish this.

Indeed, as MephistophÈlËs watched the Walpurgisnacht ballet descend from a
parody of Delibes’ Giselle into a bacchanalian orgy of rape and
ruin – his diamante glinting, his fan fluttering ever-more frantically as
the degradation increased and the bodies of dead Franco-Prussian soldiers
piled up – it seemed as if it was not so much the fantasies of the now
opium-addicted Faust that had come to life, but his darkest nightmares.
Given that the illustrations which the Irish stained-glass artist and book
illustrator, Harry Clarke, supplied for a 1926 edition of Goethe’s Faust
are said to have inspired the psychedelic imagery of the 1960s, perhaps one
day a director might dare to stage a truly mind-blowing, mood-bending Faust? In the meantime, McVicar’s production is a fantastical and
full-filling box of delights.