This is, of course, The Grange Festival’s production of Handel’s rarely
staged oratorio Belshazzar. Kitted out variously in the guise of
Babylonians, Jews and Persians and enhanced by The Grange Festival Chorus,
The Sixteen along with their director Harry Christophers have been
celebrating their 40th anniversary.

At a time of political uncertainty in Britain (alongside claims of
anti-Semitism) and continuing unrest in the Middle East this production
could not be more timely. The work’s opening soliloquy makes clear the
transient nature of empire, comparing its deadly power to a monster that
“robs, ravages and wastes the frighted world”. Sounds familiar? Oblique
references to the current political climate this may be, but Handel’s
dramatic oratorio may also have had striking contemporary resonances for
the British people serving under a German monarch, George II, when it was
first performed at the King’s Theatre, Haymarket, London in 1745.

In this performance in leafy Hampshire, a revolving model Tower of Babel
and an intimidating defensive wall around the Babylonian city (just two of
designer Robert Innes Hopkins’s imaginative creations) invoked notions of
Trump Tower and controversial US border issues, yet these were more oblique
references than heavy handed finger wagging. Handel’s setting of Charles
Jennens’s libretto (he of Saul and Messiah) recounts the
fall of Babylon and the liberation of the Jews by the conquering Persians
whose diversion of the Euphrates (seen by Cyrus in a dream) allows them to
access the city on a night of sacrilegious revelry. Pleas for Belshazzar
not to violate the Israelite’s God go unheeded and a ghostly text predicts
his downfall. Thanks to The Grange Festival’s artistic director Michael
Chance this performance (not originally conceived for the stage) enabled an
excellent team of soloists, the chorus and orchestra of the Sixteen to
remind us of Handel’s wealth of theatrical instincts. 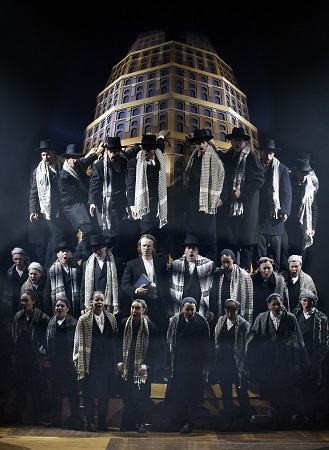 Under Daniel Slater’s imaginative direction this fully-fledged operatic
conception included, in addition to the Brueghel-inspired Tower, three
eye-popping acrobats whose perilous movements brought visual spectacle to
Belshazzar’s lavish quarters and suggested that they, like the king and his
sybaritic entourage, might be on the brink of disaster. Sharply delineated
costumes neatly outlined national identities; brightly garbed party-set
Babylonians, darkly clad Jews with traditional prayer shawls and, for the
Persian army, military tunics straight out of Star Wars. Getting
in and out of this attire was something of an achievement during one chorus
where, in just a few bars, the marauding Persians morph into body-writhing
Babylonians. That said, the Sixteen readily embrace these roles, entering
into the spirit with undisguised relish and acting their parts as if born
to them.

No less involved is Robert Murray’s impressively sung Belshazzar whose
gilt-edged tenor dispatches demanding arias with ease and portrays a
character whose excesses alarm and revolt. Clearly beyond the control of
his long-suffering Nitocris, he is unrepentant after the Jewish prophet
Daniel interprets the writing on the wall – a captivating scene bringing
emotional trauma to both. Claire Booth is a richly characterised Nitocris,
who brings clear cut credulity to a grieving and finally humiliated mother,
her compassion and anxieties for her son movingly expressed in ‘Alternate
hopes and fears distract my mind’. Only her romantic attachment to Daniel
seems to a strike false note – one that reduces the honour of both parties
and unnecessarily creates a degree of exaggerated melodrama. James Laing
fashions a scholarly-looking Daniel and sings with reassuring eloquence,
while Christopher Ainslie as a benevolent Cyrus dazzles more for his
bravura rendition of ‘Destructive war, thy limits know’ while clinging onto
the side of the ziggurat than his valour as a heroic champion of the
Persians. By contrast, Henry Waddington’s son fixated Gobrias was sung with
spirited vengeance.

What consistently claims attention is the discipline and vigour of the
augmented chorus. The Sixteen bring emotional substance to their distinct
roles (whether mocking, imploring or warmongering) and textural clarity to
their contrapuntal lines. The score is driven along with a sureness of
touch from the podium – Christophers drawing incisive, well-balanced
orchestral playing, completely at home in this gem-filled score.