Though hard at work on his opera The Excursions of Mr. Broucek,
which was first performed in 1920, when he returned to Brno Jan·?ek
immediately started sketching the first ten songs of what was to become a
22-song cycle for tenor, mezzo-soprano and piano, The Diary of One Who Disappeared. It set poems by Ozef Kalda that
had been published in the Brno newspaper, LidovÈ noviny,
on 14th and 21st May 1916, titled ‘From the pen of a
self-made man’. The poems told the tale of a young Czech boy, JanÌ?ek, from
‘a good family’, who is seduced by ‘a dark Gypsy’, Zefka, and lured into
the ‘free’ life of the traveller.

That Stˆsslov· was the inspiration for The Diary is in no doubt:
the composer wrote to her from Brno, on 10th August 1917: ‘Will
you believe that I’ve not yet got out of the house? In the morning I potter
around in the garden; regularly in the afternoon a few motifs occur to me
for those beautiful little poems about that Gypsy love. Perhaps a nice
little musical romance will come out of it – and a tiny bit of the
Luha?ovice mood would be in it.’ A year later, on 2nd September
1918, his mood was less optimistic: ‘It’s too bad my Gypsy girl can’t be
called something like Kamilka. That’s why I also don’t want to go on with
the piece. I can’t explain why you don’t write to me … I have nothing more
than memories – when then, so I live in them.’

Jan·?ek continued work on The Diary during the following two
years, completing it in 1920. It was first heard at a private performance
that year, and then premiered at the Reduta Theatre in Brno on 18 th April 1921. There is undoubtedly an ‘operatic’ dimension about
the cycle, not least because, after the first eight songs in which the
tenor recalls when he saw Zefka, songs nine to eleven act out that first
meeting, as the composer turns indirect speech into direct interaction.
Zefka enters at the end of song eight, and an offstage female chorus (like
that which represents the soul of the Volga in K·?a Kabanov·)
sings the narrative of a seduction Jan·?ek deliberately avoids portraying
‘on stage’.

In song nine, Zefka sings: “Welcome JanÌ?ek, welcome here in the wood. What
happy coincidence brings you this way? What are you standing here like that
for? So pale; so still; Why, are you perhaps afraid of me?” To which the
young man replies, “I really have no cause to be afraid of anyone. I came
here only to cut an axle-pin”, whereupon Zefka invites him to put aside his
duties and to listen to her gypsy song. The remaining songs chart the
aftermath of the seduction. 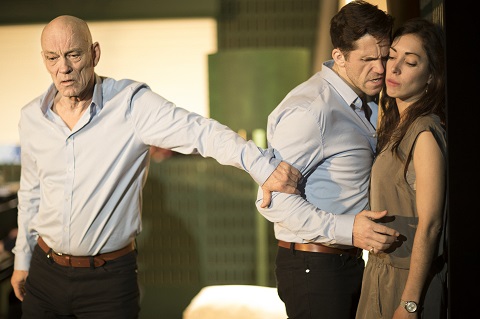 Not surprisingly, there have been various dramatizations of The Diary – including Shadwell Opera’s

in 2017. Jan·?ek himself is reported to have said that he wanted the cycle
to be performed in ghostly half-lighting. That said, the drama is present
in every note of the music. The Diary does not depend for its
power on overt context, gesture or symbol. That over-prescription might in
fact destroy the almost visceral intensity of the work was something that I
felt very strongly during this staging of Ivo van Hove’s ‘interventionist’
staging at the Royal Opera House’s Linbury Theatre. Superimposing an
autobiographical narrative on the tale told in poetry, and commissioning
additional music and songs from the Belgian composer Annelies Van Parys
which ‘allow us to see some of the story form Zefka’s perspective’, van
Hove almost doubles the work’s length while significantly diluting its
expressive immediacy.

Van Hove worked with two of his regular collaborators for this 2017
production for the Belgian company Muziektheater Transparant: set and
lighting designer, Jan Versweyveld, and costume
designer An d’Huys. Versweyveld’s set seems to shift us forward from the
latter years of the First World War to the 1960s, and from nature to
‘civilisation’: specifically, to a photographic lab-cum-studio flat,
comprising kitchen, dark room, office and bedroom, the patterned lighting
effects intended, I assume, to evoke the landscape of the original woodland
tryst. The confined space can, however, accommodate a grand piano. JanÌ?ek
(tenor Ed Lyon) is now a photographer; rather than reliving his memories
through music, he projects his remembered encounter – the gypsy’s name, an
image of the Romany girl – onto the lab-apartment’s walls, assisted by an
elderly man (Wim van der Grijn) who, we learn, is the composer himself. 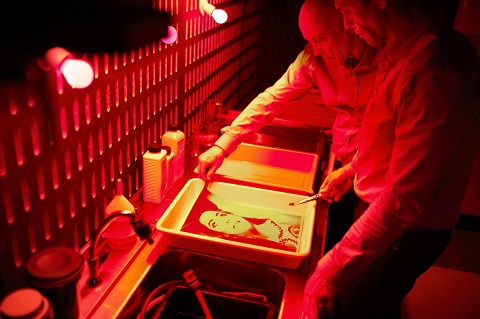 At the start, all is silent. A woman in red (Marie Hamard) enters and is
instructed by a recorded male voice to make a cup of tea, sit at the piano
and tap out a scale, some snatches of melody. It feels clunky and awkward.
Pianist Lada Valesova then takes her place at the keyboard; her playing is
the linchpin of the performance, every gesture redolent with a clear vision
of musical meaning and empathy for the composer’s emotive language. What a
pity the piano lid remains closed throughout, though this does not prevent
Valesova from conjuring emotional fire and frailty with equal insight and
impact.

Lyon’s singing is fervent and precise, though there’s a lack of Slavic
colour and passion, for all the rolling around on the carpet in which he
and Hamard indulge. But, Lyon also conjures a telling sincerity and
vulnerability which is countered by Hamard’s vocal strength. Van Parys’
music merges into Jan·?ek’s songs with surprising persuasiveness, though I
can’t help but feel that Jan·?ek’s decision to allow the gypsy’s voice to
be heard only in the central encounter strengthens the yearning and desire
communicated by JanÌ?ek. 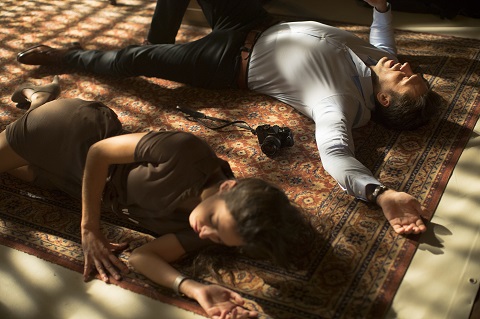 There’s nothing amiss with the ‘quality’ of the individual performances.
But, the whole is strangely cold and clinical. One thing that is sadly
missing is the exoticism of the ‘gypsy’; a red ‘business dress’ and hooped
earrings don’t really compensate. Writing to Stˆsslova from Hukvaldy in
July 1924, the composer declared, ‘And K·t’a, you know, that was you beside
me. And that black Gypsy girl in my Diary of One Who Disappeared –
that was especially you even more.’ Later, in April 1927, a year before his
death Jan·?ek wrote, ‘Wherever I am, I think to myself: you can’t want
anything else in life if you’ve got this dear, cheerful, black little
‘Gypsy girl’ of yours’.

At the time of The Diary’s composition, there was considerable
prejudice against the gypsy population in Moravia, and the cycle’s original
text had included political comments about the need for a gypsy homeland
(and indirect plea, perhaps, for a Czech homeland). Jan·?ek scholar Michael
Beckerman’s observations are instructive: ‘For centuries the Gypsies, hated
and reviled, nonetheless furnished material for myriad erotic fantasies,
becoming the dark tabula rasa on which all the base and sensual
fantasies of white society were projected.’ In 1918 the new country of
Czechoslovakia was formed, guaranteeing equal rights to all citizens –
including 20,000 gypsies: ‘far from being a harsh, disturbing or sinister
presence, the Gypsies at this time functioned as what we might call
“orientalism from within”, an exotic symbol of freedom, passion and
improvisation.’ Van Hove almost completely ignores, or destroys, this –
surely fundamental – dimension of the work.

At the close of van Hove’s realisation, the seated figure of Wim van der
Grijn reads and then burns his letters to Stˆsslova, dropping the flaming
pages into a waste-paper bin. His unfulfilled dreams now ashes, he climbs
into the small bed, presumably ready for death. But, The Diary
ends in defiance and hope, not despair. Originally the vocal climax came in
song 14, the height of JanÌ?ek’s desolation and hopelessness, “Oh what have
I lost!” But, Jan·?ek’s revisions shifted the emotional peak to the final
song, which rises to a top C: “All that is left is for me to say goodbye
forever.” And, with a farewell to his father, mother and little sister,
“the apple of my eye”, JanÌ?ek departs: “Zefka is waiting for me with our
son in her arms!”

Van Hove’s staging is refined where it could be raw; elegant where it could
be elemental. He denies us intimacy, immediacy – an intensity, recalling
the string quartets, which draws us into the stories the composer tells,
whether fictional or autobiographical. And, he denies us the hope and
consolation that Jan·?ek’s final song exudes.

The Diary of One Who Disappeared
: Leoö Jan·?ek and Annelies Van Parys