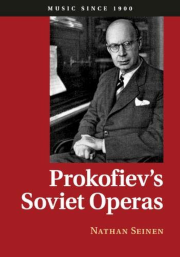 “Prokofiev considered himself to be primarily a composer of opera, and his return to Russia in the mid-1930s was partially motivated by the goal to renew his activity in this genre. His Soviet career coincided with the height of the Stalin era, when official interest and involvement in opera increased, leading to demands for nationalism and heroism to be represented on the stage to promote the Soviet Union and the Stalinist regime. Drawing on a wealth of primary source materials and engaging with recent scholarship in Slavonic studies, this book investigates encounters between Prokofiev’s late operas and the aesthetics of socialist realism, contemporary culture (including literature, film, and theatre), political ideology, and the obstacles of bureaucratic interventions and historical events. This contextual approach is interwoven with critical interpretations of the operas in their original versions, providing a new account of their stylistic and formal features and connections to operatic traditions.”

Martin Graham steps down as Chairman of Longborough Festival Opera