Christophe HonorÈ is a high-profile French film maker and playwright who is a prominent gay activist in this time of a long overdue updating of human rights. This places Mr. HonorÈ in prime position to become a part of France’s progressive opera world, namely the Aix Festival where he directed the 2016 Ethiopian Cosi fan tutte and the OpÈra de Lyon where he directed the 2017 Don Carlos wrapped in stage curtains (until the auto da fÈ which was stuffed into the galleries of an Elizabethan theater).
Thus it is no surprise that he should be back on the front lines of French avant-garde opera, again at the Aix Festival with a Tosca than he has set in New York City’s Manhattan, or maybe in the far less sophisticated Bronx. It is not Tosca the opera, it is an unsettling tale of the demise of a Tosca diva, Puccini’s magnificent score reduced to a troubling piece of prosaic theater.
Mr. HonorÈ states in the program booklet that the big question in Tosca is if an artist’s art can protect the artist from life — Tosca’s does not, Cavaradossi’s does not. It would seem that the question need not be asked, since the great, even gigantic gesture in Puccini’s Tosca is release from life. The opera Tosca is an artistic ritual of liberation that can be infinitely repeated. It is not an “impermanent” (descriptive term used by director HonorÈ) work of art waiting to be used. 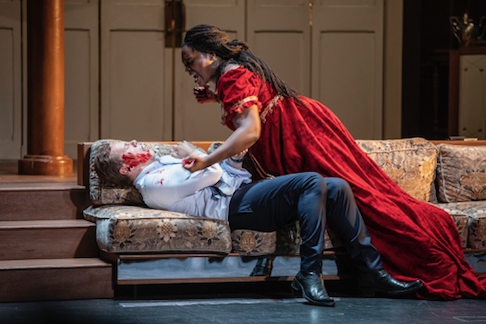 Angel Blue as Tosca in the copy of the dress worn by the Tosca of Maria Callas, Alexey Markov as Scarpia.
And abused. Abused by the giant screen film adaptations (movies) of real performances that occurred in the past few weeks in Aix cinemas. Or abused by re-writing the story to make the first act the rehearsal for a concert to honor an aged diva, the second act to illustrate psycho-sexual implications of gay diva worship, and the third act to be the concert where the diva is the victim of her art, taking her own life at the conclusion of the concert.
A reading of The Rise and Fall of Gay Culture might suggest that the gay men of the second act vicariously execute the diva to rid themselves of their arch competitor for the seduction of desired males (Cavaradossi, for example).
Then there was the abuse of the audience, making us wait while the orchestra was moved to the stage (no easy process), thus repeating the wait-abuse Mr. HonorÈ perpetrated on the Lyon Don Carlos audience. And the abuse of the audience by two videographers stalking the stage to capture faces to be continuously projected on giant screens above the stage floor, images of disembodied voices that Mr. HonorÈ ordains as images of the real (as opposed to the operatic).
The revelation of the evening was the very present, vibrant sound of the ArchevechÈ theater pit evidenced by the huge presence of the excellent orchestra of the OpÈra de Lyon. Conductor Daniele Rustioni, music director of the OpÈra de Lyon, offered an idiomatically correct reading of the Puccini score, allowing its subtleties to shine forth. The orchestral sound was forceful indeed, though it never competed with the stage for presence. Once on-stage the orchestral sound was nearly magnificent, an unexpected acoustic miracle.
The aged diva of the Christophe HonorÈ’s Tosca was Catherine Malfitano, once an internationally recognized Tosca. La Malfitano is now seventy-one years old, and retains the remarkable presence that marked her long and distinguished career. She bravely fought her way through this ordeal of uselessness, bravely enduring the ravages of time on the body and voice in this savage vision of artistic demise.
The ingenue Tosca diva was American soprano Angel Blue, already a Mimi on major stages she may yet become a new age Tosca. Maltese tenor Joseph Calleja sang Cavaradossi, his rÙle fÈtishe. His recent Cavaradossi at the Met boasted secure high notes that did not find their way to Aix, the intimacy of the ArchevechÈ theater did not favor his blatant, high-horsepower delivery. 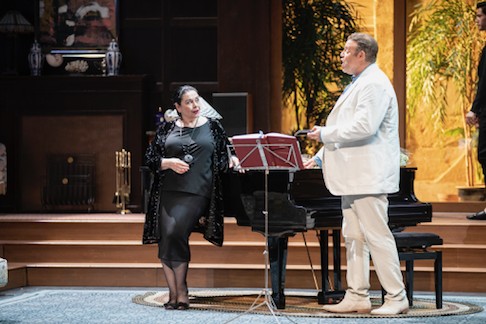 Catherine Malfitano as the Diva, Joseph Calleja as Cavaradossi
Russian bass baritone Alexey Markov provided a trim figured, vocally dark and focused Scarpia. The cluttered, frenetic happenings (lots of gay sex stage-right) on the stage eclipsed his great moments. It was unclear how he fit into the picture. Tosca brutally stabbed him in the face, meanwhile the aged Tosca diva payed a Cavaradossi double for sex. There was so much extra-opera stuff going on I wasn’t sure where to look to discover the essentials. If there were any.
Michael Milenski