Making the best of limited stage facilities, Richard Studer shrewdly adopts
a one-size-fits-all design which neatly amplifies the contrasting fortunes
of, and social distinctions between Don Magnifico and his daughters and
Prince Ramiro, his tutor and valet who, together, shape over two hours of
comic interaction, the whole given slick, clear-sighted direction by
Victoria Newlyn.

This new production manages not just to point up clear-cut class difference
outlined by Jacopo Ferretti’s libretti (drawn from Charles Perrault’s tale Cendrillon) but wittily brings into focus unfulfilled social
aspirations notwithstanding the central rags to riches narrative of
Cinderella. We meet her stepfather Don Magnifico near the beginning of Act
One emerging sleepily from his abandoned car around which his loutish
daughters Clorinda and Tisbe torment Cinderella with cooking and cleaning
chores. An image of the family’s former home is shown backstage, so too a
palatial residence but, owing to limited resources, any lavish ballroom
scene is left largely to our imaginations – as are the voices of the Chorus
which arrive pre-recorded.

Rather than being short-changed by this specially tailored staging (along
with Jonathan Lyness’s slimmed-down orchestral score) this made-to-measure
version emphasises with potent immediacy the personal relationships of a
cast of seven who, mostly at the start of their careers, provide strongly
defined performances. Leading the young team, Heather Lowe made a wholly
sympathetic Cinderella, no lily-livered personality here but a spirited
young woman burdened by her lot without being entirely submissive to it.
Vocally she was a joy to listen to, assured from her first folk-like ballad
through to her enraptured final aria. On the way she combined an easy
command of the role’s extended tessitura with a vocal agility that made
room for plenty of expression no more so than her pleas to attend the
prince’s ball. Hers was a voice that dispatched her multitudinous notes
with an effortless facility, yet always placing technique at the service of
the music. 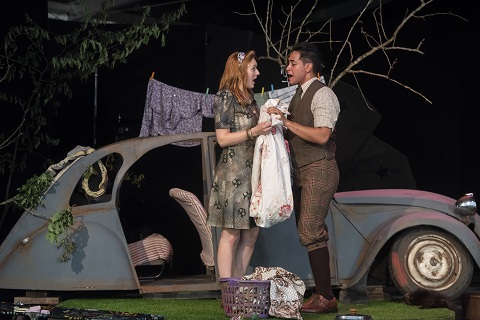 She fashioned a believable partnership with New Zealand-Tongan Filipe Manu
as the urbane Ramiro whose pleasing lyric tenor made light work of
Rossini’s vocal demands, though his stage movement didn’t always convince
in his dual roles as servant and prince. That said there was much to admire
in his collaboration with Nicholas Mogg’s flamboyant Dandini attired in
kilt and mismatching socks, and clearly revelling in his comic creation.
Possessed with a clear, well projected voice, Mogg consistently held the
ear and eye. His will be a name to watch out for. 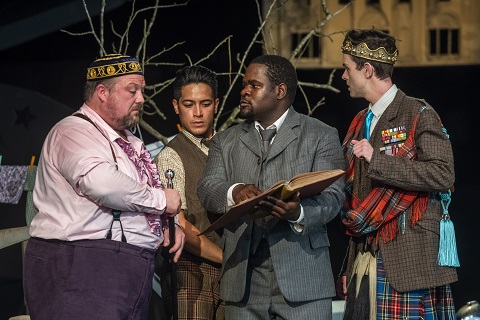 Matthew Stiff also had stage presence as Don Magnifico, a role both comic
and cruel, and sung here with a vocal warmth that brought plenty of appeal
to his ‘used-car salesman’ characterisation. His daughters, Zoe Drummond’s
Clorinda and Sioned Gwen Davies as Tisbe, were superb as bickering
siblings; to the manor born as chavvy teenagers whose attempts to win the
hand of Ramiro made for some truly cringe-making moments – a compelling
coupling. Finally, there was the sobering presence and rich tones of the
young Congolese bass Blaise Malaba. 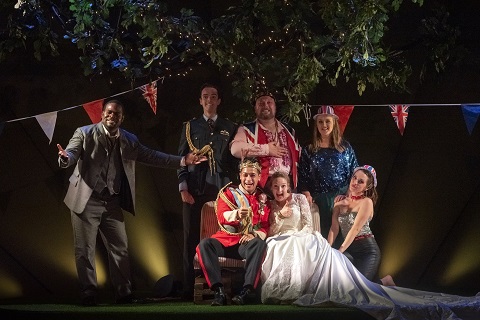 Some of the most impressive musicianship came from the ensemble numbers
where meticulous rehearsal paid off in assured performances occasionally
supported by cheesy dance movement. Not exactly ‘Strictly’, but the
disco-influenced routines were all part of this fun-filled evening. Giving
support to those above stage was the West Green House Opera Orchestra
skilfully directed by Matthew Kofi-Waldron. He secured stylish playing
throughout and steered well-judged tempi that brought buoyancy and plenty
of excitement without compromising ensemble. Altogether, a thoroughly
enjoyable evening.