A little more than three years after

of Die Meistersinger von N¸rnberg, I looked forward to making its
reacquaintance. It struck me then as being, alongside Stefan Herheim’s
staging (seen in both

), one of the most significant additions to the repertory. There has not,
frankly, been much in the way of competition, offerings from

in particular having proved well-nigh disastrous. How did Bˆsch’s staging
measure up now? In some ways, well. It is certainly more coherent than
either of the last too named. However, a good deal of what had made it
distinctive, and had decided me to include it in

, had disappeared, presumably a casualty of the lack of rehearsal for a
brief festival revival. Two at least of its most distinguishing
characteristics, the violence at the heart of a reconstructed, provincial
‘community’, and a welcome feminist conception of Eva, had respectively
been toned down (more likely, perhaps, unknowingly omitted) and jettisoned.
A great pity, that, though perhaps not unlikely in the circumstances: a
reminder, at least, that what we see in June and July is not always so very
close to what was originally envisaged (and seen).

I shall try, though, not to dwell unduly on what might have been, on what
had been: anyone interested in the 2016 first performances, including Jonas
Kaufmann, may consult

. The importance of (multi-)media in transmission of music, art more
generally, and indeed life, such as it is, more generally, continues to
register, for instance in video footage of plans, instructions, flowcharts,
and sketches: there is a thin line, perhaps, between the nerd and the
pedant. Press coverage of the mastersong competition flicks through, also
on video, when the masters first enter, an important point the centenary
1868-1968 (the first year, of course, the work’s premiere, the second year
not an unimportant year in the history of the Left), in which Veit Pogner
had claimed the prize. That generation has a great deal to answer for, many
of us would argue; at least we were spared the sight of Antony Charles
Lynton Blair et al. strutting their wares ‘just more one time’. At
any rate, this contest for a bartered bride, as much sport as art, and
heavily sponsored by ‘Meister Br‰u’’, sums things up nicely. Sport, of
course, always gets off lightly, entwining nationalism (and/or localism)
and toxic masculinity, as it does. No one dare accuse it, though, given the
media interests at stake. (Consider British liberals’ obsession with the
appalling 2012 Olympics.) Contrast that with the laudable attempts at
self-criticism of most important artistic production since the Second World
War. That contrast certainly seems implicit here, although the shock
violence initially administered by Beckmesser as Marker to Walther now
seems ‘mere’ entertainment: a flashing of lights rather than electric
shock. Perhaps, though, as everything becomes more mediated, as Trump,
Johnson, and other fascists star in their own game show, impervious to
political criticism and activity, there is something to be said for such a
degeneration too. 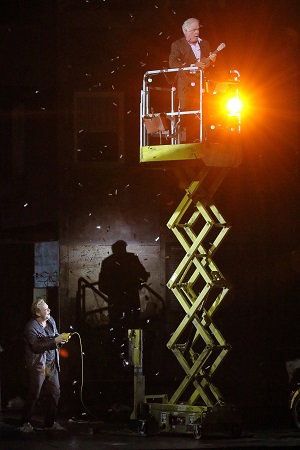 The moment of revolt – or is it further repression – comes through more
fitfully in the second act than previously. Can one make a Marcusian case
for the apprentices’ thuggery? Probably. Should one? Difficult to say. (One
might say the same for Andreas Baader, after all, or the original, far more
lethal, RAF.) But the chemistry between Sachs and Eva, the plausibility of
their romance, has struck earlier on a very different note. What often
seems dramaturgically unconvincing, even odd, here seems quite natural, for
want of a better word. Whether that were the case in 2016, I cannot
remember, although the artists, Wolfgang Koch and Sara Jakubiak, were the
same. Their performances all round were outstanding. If the extremely
powerful moment of Eva’s rejection – of the contest – in the third act now
seemed to be missing, Jakubiak offered intelligent, vocally alluring
singing, as well as accomplished acting. So too did Koch, of course, with a
wisdom born of experience not only as Sachs but in many other roles.

Let us return, however, to the production, to the third act. Sachs’s
neon-lit van having lost two of its letters, now sighs, in Schopenhauerian
style, ‘ACH’. More might have been made of that implication, especially in
light of loss of the provincial violence that initially made this act so
threatening, so disconcerting. There remain hints, perhaps most notably in
the apprentices’ behaviour towards David, homophobic bullying still, I
think, implicit. But they are only hints, and would perhaps mostly be
noticed by those who had seen the production before. Beckmesser’s return at
the very close, to shoot himself, makes far less sense in the absence of
such build-up. A pity, as I said, although perhaps there is something to be
salvaged in reflection upon continuing degeneration into entertainment. 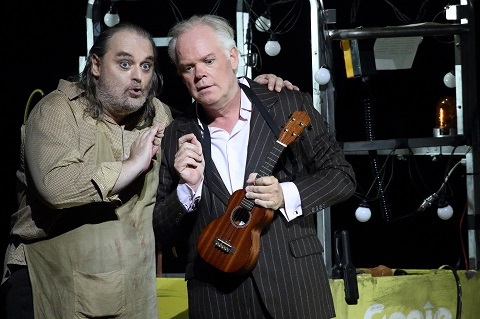 Musically, standards remained high: very high indeed in the case of Kirill
Petrenko, the orchestra, and chorus. Of Wagner’s works, this seems very
much Petrenko’s best, at least in my experience. Formidable technical
challenges – simply marshalling those forces, in a far from simple staging
– never seemed to register, however great the art in concealing that art (a Meistersinger virtue in itself). Wagner’s score flowed with all
the inevitability of a mighty river. That is never, though, at the expense
of detail, overt contrapuntal (and other) virtuosity in which the composer
sometimes revels portrayed lovingly, comprehendingly, without degenerating
into mere virtuosity itself. It was, moreover, not only in the counterpoint
and chorales that Wagner’s Bachian debt was repaid. Wagner’s writing for
oboes in particular, played as superlatively as it was here, gave pause to
all manner of thoughts concerning connection with Bach’s sacred music too.
(Now might we hear a St Matthew Passion or B minor Mass from
Petrenko? Even some of the cantatas? Too much to hope? If so, it is surely
a victimless crime.) 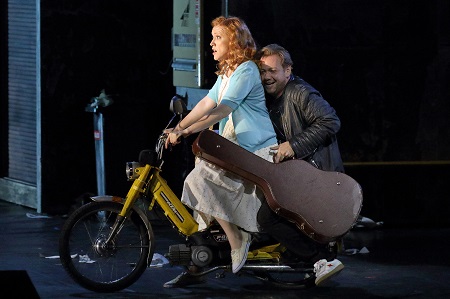 Kaufmann had withdrawn earlier in the week, replaced at very short notice
as Walther by Daniel Kirch. There was considerable promise in his
performance, although he tired towards the end. At his best in the second
act, Kirch showed himself capable of a detailed, variegated performance,
both verbally and musically. Earlier on, perhaps still finding his way
around the Nationaltheater, he had a tendency to force his voice somewhat,
almost as if a Siegfried. There remained, though, much to admire. Martin
Gantner’s Beckmesser was first-rate: a sung Malvolio of the highest
quality. Allan Clayton’s David proved equally detailed and finely sung,
well matched to Okka von der Damerau’s spirited Magdalena. Christof
Fischesser made for an uncommonly youthful, virile Pogner, and

Night Watchman suggested a singer from whom we shall be hearing much more
soon. More than enough, then, to be going on with until the full revival
Bˆsch’s production unquestionably merits.