The very title of this Prom, ‘Mississippi Goddam’, taken from Simone’s 1964
album, Nina Simone in Concert, comes from her first civil rights
song and was written in response to the 1963 murder of Medgar Evers, and
the September 1963 bombing of a Baptist church in Birmingham, Alabama. The
song was controversial at the time – especially below the Mason-Dixon Line,
where ‘Goddam’ was expunged and boxes of records sent to record stations
were returned broken in half; but, despite its almost show-tune feel it
remains extraordinarily powerful half a century later. The protest songs
are one part of Simone’s output, but what this magnificent Prom also amply
demonstrated is that Simone’s legacy and outreach is one of astonishing
breadth.

In many ways, Simone was considerably more radical – and more complex –
than other American artists of the time such as Ella Fitzgerald or Dina
Washington. She was just very different to them; and the voice was too. If
you were looking for a parallel today, the singer who most resembles her is
Diamanda Galas: Both invoke the power of their feminist credentials, both
cross into multiple musical genres, and both are unafraid to confront
unfashionable and overtly political causes. Simone’s music can clash with
her personal life, just as Galas’s does – when Simone writes and sings in
‘Be My Husband’ the slavery she is referring to is the abuse of marriage,
but while it might be framed as a very personal story it has a universal
truth to countless other American women trapped in abusive marriages.
Galas’s Plague Mass isn’t just about her brother’s fight against
AIDS – it’s an angry, terrifying onslaught against all personal AIDS
battles.

Nina Simone’s voice was a lot of things, often within the same song. It
could be extraordinarily warm, almost thickened like treacle, but also have
an adenoidal range to it. It was unusually intense, even in her studio
recordings for Philips or RCA, though some of her live performances on disc
have a magnetism that is quite unique: ‘Dambala’, which appeared in 1974,
and which was heard in this Prom, is staggering for its intensity and
radiance. Improvisation mattered a great deal; but what is also there is
what you can’t really teach. At her greatest, there is a depth and
spirituality to the voice, a poetry and soulfulness which touches the
visceral. In part this must certainly have much to do with Simone the inner
woman: Fiery, volatile and prone to bouts of rage. Only later was she to be
diagnosed with bipolar disorder.

It’s perhaps not surprising, given all this, that it took two singers to do
justice to the songs in this concert. Ledisi and Lisa Fischer have
strikingly different voices, in both colour and range. What they share is
an ability to dig deep – if some of this concert was clearly a display of
vocal virtuosity of the highest order, other parts of it were about
exploring the plight of black women in America, their place in wider
Eurocentric cultures or about how beauty and identity relate to women of
colour. Fischer generally sang these more emotionally demanding songs; the
smoky, dark soulfulness of her voice mostly caught the complex place of
womanhood in a divisive cultural world. Fischer’s performance of ‘Dambala’
was simply profound, taken at such a slow tempo the power of it became
unbearable. I’m not sure any song during the evening was more emotionally
draining or invoked the sheer horror of slavery more successfully. The
deliberate tempo, not to say the way in which Fischer drew us in, made us
complicit in the hopelessness of ever unshackling those in slavery. 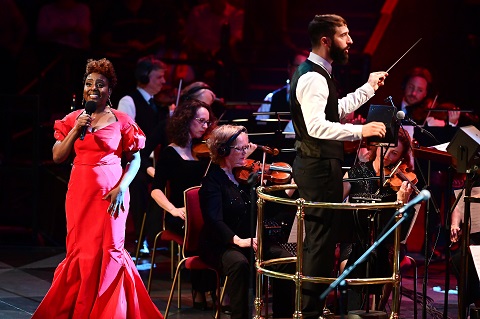 This was a marked contrast to Ledisi’s performance of ‘I Put a Spell on
You’ which had been almost cannibalistic – somewhat different to how Simone
takes the song on her classic Philips recordings from 1964-5. Simone’s
willingness to draw back from this song’s rawest elements, even to be
restrained in it until winding up towards the end in typical belt-it-out
fashion, isn’t a vision that Ledisi shares. From the very start, this was a
performance that never shrunk from being a tour de force: If
spells are remotely menacing this one wasn’t that, but it was simply naked
with passion, inflamed with intensity and staggering in its vocal control.
Predictably, it brought the house down.

From the same album on which ‘I Put a Spell on You’ appeared, Ledisi also
sang ‘Ne me quitte pas’, one of the many songs which Simone wrote in French
after she moved to Europe. Diction issues aside, this gave Ledisi an
opportunity to bring some depth to her singing – which she did admirably.
‘My Baby Just cares for Me’ (from her very first album in 1958) was
probably better sung by Fischer than by Simone herself. This is to all
intents and purposes a love song, but Simone’s general unwillingness to
embrace this genre (for a time she even forgot she had recorded this song)
demonstrates a side of Simone’s character that could so easily interfere
with her ability to communicate to audiences. Simone’s tendency to deflect
her passions onto others, into feminism, enfranchisement and protest,
masked an often loveless and abusive personal life, one in which she
neither received nor gave much emotional feeling to others. If there’s a
detached, almost matter-of-fact tenor to Simone’s version of this song
Fischer sees it otherwise. ‘Plain Gold Ring’ (also from 1958) is almost
callous when set beside this love song – a ballad of unrequited love,
unfaithfulness and exploitation. Fischer, her credentials so woven into the
mysteries of emotions and love, found herself equally at home in the
complex triangulation of a love that would never be.

Fischer had also been the vocalist in two pieces which came from two very
different operas – one of which Simone did sing and record, the other which
she did not. Her musical range was, of course, eclectic – indeed, in her
formative years she had intended to study at the Curtis Institute in
Philadelphia but was turned down, something which she spent the rest of the
life insisting had been racially motivated. ‘I Loves You, Porgy’ from Act
II of Gershwin’s opera (which she recorded in 1958) always showed Simone at
her best: Tender, the voice at its most evocative and controlled. Fischer
certainly had the range for it, if not quite the tenderness, but there was
a feverishness to her singing which was entirely descriptive of the
narrative. Much less successful – in fact a miss for me – was ‘Dido’s
Lament’. Fischer’s somewhat quirky, rather gospel-inflected version of this
was literally sectionalised into ups-and downs; at times it just sounded
unsettling. The voice is unquestionably dark enough, it’s warm and tonally
rich – I just couldn’t warm to this interpretation. 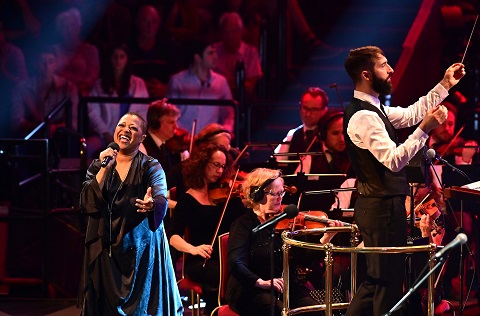 ‘Mississippi Goddam’, sang so impeccably by Ledisi, was superb. Despite the
protest elements of this song, its radical overtones, it is musically quite
the opposite. Its jauntiness, elastic rhythms and incendiary beat cover a
deeply invective narrative. Ledisi launched into it with an intensity that
gripped one from the very beginning, but every word of this profoundly
powerful song was sung from the heart. ‘Four Women’, from 1966, was sung by
Ledisi, Fischer and two members of the backing group, LaSharVu. Although
this song is about enslavement it is about something else: It is about
identity, and especially how black women are stereotyped. Unquestionably,
the version of the song here probably worked better than Simone’s own
because the sense of identity shared by different women was better
advocated for, by voices which were very different in colour themselves.
There was a deep spiritualism to this song in this performance – but also a
contrast to the African-American, or mixed-race stereotypes which so
inspired Simone to write it in the first place.

It has to be said that Big Jazz playing is just one of the most
exhilarating sounds imaginable. Many of the versions for these covers were
written for these performers, and the sound was beyond lush. The Metropole
Orkest was bewildering good. Individual solos, whether on the piano,
saxophone, trombone or amplified guitar were electrifying – but the
corporate sound of the orchestra was thrilling, beautifully conducted by
Jules Buckley.

Of course, concerts never just end, and this one didn’t either. A
roof-raising, unforgettable encore of ‘Feeling Good’ followed. Subtle it
was not, less slow-burning than Nina Simone ever brought to it, but sung
here to showcase two voices at the peak of their considerable powers and
ranges. It brought a capacity house to their feet.

This concert is on BBC iPlayer for 30 days, will be broadcast on BBC Radio
2 on Friday 13th September and shown on BBC Four on 30 th August.