But, Joplin’s opera, for all its dramatic defects, is an important work,
for musical and non-musical reasons, and it was good to see Spectra Ensemble bringing the work to the Grimeborn festival at
the Arcola Theatre.

Initially labelled a ‘folk opera’, Treemonisha was subsequently
described by its composer as ‘not ragtime … the score complete is grand
opera’. In fact, the score mingles a quasi-Wagnerian palette with folk
tunes, ballads, barbershop, gospel and even the music of the circus.
Contemporary critics missed the point when they denigrated it as a poor
imitation of European opera, for its hybridity might be seen as an attempt
by ‘The King of Ragtime’ to forge a new, distinctly ‘American’ musical
language, while its use of American themes, anticipates works such as Porgy and Bess, Oklahoma, and Carousel.

Written in 1911, set in Arkansas in the 1880s, and reflecting Joplin’s own
experience as a young African American during the Reconstruction period, Treemonisha had to wait until more than fifty years after Joplin’s
death for its premiere, at the Atlanta Memorial Arts Center on 28 th January 1972. It wasn’t the composer’s first opera: a
single-act work comprising twelve ragtime tunes, A Guest of Honor,
was completed in 1903 but Joplin’s publisher refused to publish it and
there is no extant score. Joplin chose to publish Treemonisha
himself and included a lengthy preface which provides details of the
character and setting, and explains his ‘leitmotivic’ method. 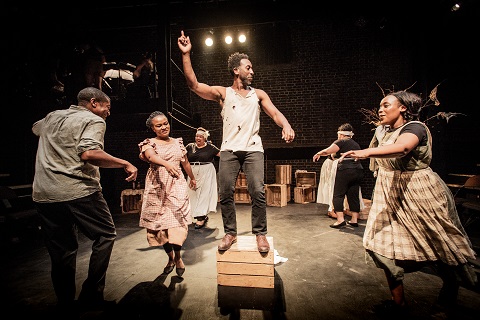 The opera is very much of its time, presenting a plantation
community of freed slaves who fall prey to a ‘conjuror’, Zodzetrick, and
his side-kick, Luddud, who exploit the simple folk’s gullibility and sell
them ‘bags of luck’ to ward off evil spirits. The community is ‘saved’ by
Treemonisha. Found under a tree, and adopted by a good-hearted couple –
Ned, who manages the plantation for its white absentee landlord, and his
wife Monisha – she has received an education from a white lady in town in
exchange for her laundry services. She now sets about educating her fellow
folk, challenging their superstitious beliefs. Fearful that Treemonisha’s
enlightening effect will be bad for business, the conjurors first threaten
and then abduct Treemonisha. She is rescued by one of her pupils, Remus,
and, having urged her community to spare the kidnappers a brutal
punishment, Treemonisha is then elected their leader.

The main studio at the Arcola Theatre is a challenging space within which
to conjure a plantation deep in a forest in Arkansas. The brick walls of
the former paint factory don’t lend themselves to a depiction of rural
life, but director Cecilia Stinton and set/costume designer RaphaÈ Memon
succeed in creating a credible, somewhat homey – and homely – community, by
means of a few wooden crates and a paper tree-sculpture. But, figuratively,
the ‘earth’ needs, I feel, to be a stronger presence: Stinton doesn’t draw
out the community’s conflicting feelings, their joy at their new freedom
being countered by a confusing love for the very land that once held them
prisoner. Perhaps Ali Hunter’s lighting might have done more to
evoke the colour and textures of the land?

With the musicians perched on the mezzanine above the thrust stage, Stinton
makes effective use of the space beneath, and of the steps leading out of
the auditorium, to suggest different locale, though briefly projected
‘titles’ might have been useful. Moreover, Joplin, who wrote both the score
and libretto, distinguishes the characters by using dialect for the
‘uneducated’ folk, but whether the Spectra cast observed this
distinction I could not tell, for the diction was not always clear. 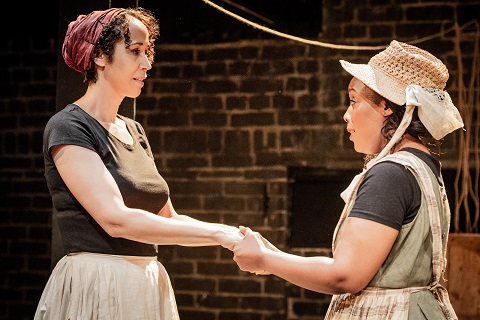 But, while some of the characters remained emblematic, others were given a
dignity which raised them above stereotype. Grace Nyandoro’s soprano has a
strength and a shine that conveyed Treemonisha’s integrity, vision and
resilience, and her final acceptance of the leadership of the community was
emotive and heart-warming. As Parson Alltalk, bass Rodney Earl Clarke
delivered a powerful ‘sermon’, ‘Wrong is Never Right’, and doubled as a
steadfast Ned, partnered by Samantha Houston as Monisha. The duet in which
they tell Treemonisha of her origins was touching, though Houston did not,
I felt, suggest the real melancholy that lingers in Joplin’s music.
Zodzetrick was sung with power by Njabulo Madlada, his voice adding a touch
of real menace that was largely missing from the production itself. Tenor
Edwin Cotton struggled a little with the higher lying passages of Remus’s
vocal lines, but acted spiritedly, while mezzo-soprano Caroline Modiba sang
with fullness and smoothness as Lucy, Treemonisha’s friend.

There was a certain cautiousness about this first-night performance,
though; the ensembles, in particular, were lacking in the sort of vigour
that would have communicated the real spirit of the community, and the
dances were somewhat conservative. ‘The Bag of Luck’ which introduces the
main characters at the start of Act 1 should surely make a more vibrant
impact. Perhaps it was just a case of opening night prudence: certainly,
there was no hesitancy from the six musicians led by flautist/musical
director Matthew Lynch, who played stylishly. Moreover, the light
instrumentation (Joplin’s own orchestrated score is lost) created an
intimacy complemented by the thrust stage.

Spectra Ensemble
gave a good account of Joplin’s opera, but one which didn’t really explore
or seek to reveal the African-American socio-political issues that Treemonisha addresses, as issues of race intersect with those of
gender, class and sexuality. The opera celebrates education over ignorance
and enlightenment over superstition, espousing American-Christian values,
and many commentators have observed the broad associations between Treemonisha and the ‘uplift ideology’ of contemporaries such as
Booker T. Washington and W.E.B. Du Bois. Joplin was an active member of at
least one social-improvement organization, the Colored Vaudeville
Benevolent Association, a charitable group founded in New York in 1909.
And, after her husband’s death, Lottie Joplin eulogised that he ‘wanted to
free his people from poverty, ignorance, and superstition, just like the
heroine of his ragtime opera, Treemonisha’.

Stinton’s appealing but somewhat cosily sentimental production overlooked
the undercurrents which give the opera – especially its closing chorus and
dance, ‘A Real Slow Drag’ – its sad wistfulness. After all, as Rick
Benjamin – conductor of New World Records’ centenary-celebrating recording
in 2011, and a leading authority and interpreter of ragtime music – has
observed, Treemonisha ‘is truly a rare artifact of a vanished
culture: an opera about African-Americans of the Reconstruction era –
created by a black man who actually lived through it’.