And like prime bubbly, the production tickled the senses and warmed the heart.

From the first downbeat, it was evident that conductor Michael Morgan achieved that rare happenstance: He elicited echt Viennese stylistic playing from a group of American musicians. That is not as easy as it seems. European bands usually effortlessly “live” this music, its subtleties are second nature to them. Rarely do American instrumentalists achieve this unity of nuanced purpose, that successfully suggests just the right elitist Kaffekultur ambience.

Maestro Morgan’s sure baton expertly finds the inevitable sweep of the waltz, the building excitement of the accelerandi, the spunk in the novelty numbers, and the melancholy in the introspective stretches. From first to last, this was wonderful music making and the first rate orchestra responded brilliantly. Moreover, Morgan is highly adept at partnering his superb singers. 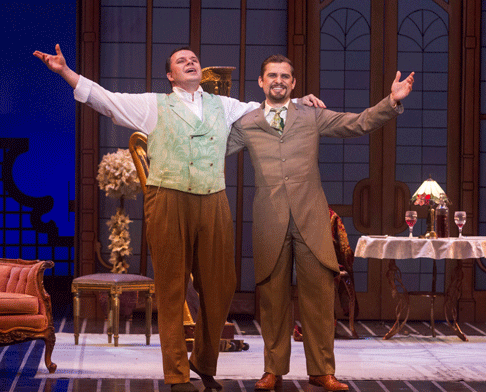 Maria Natale is a radiant Rosalinde. Her poised soprano sports a full-bodied, gleaming sheen, with a technique that is even from top to bottom. Her stately physical elegance does not prepare us for her eventual savvy comedic sensibilities. Whether cooing sweetly, exulting passionately, or teasing playfully, Ms. Natale found every bit of variety and color that are the hallmarks of a fine Rosalinde. Her Czardas was the hot-blooded showpiece it needed to be, from the searing opening declamations to the limpid and colorful folksy section to the ebullient urgency of the final allegro.

Eugene Brancoveanu’s animated von Eisenstein was altogether remarkable not just for vocal achievement but especially for theatrical inventiveness. Mr. Brancoveanu is possessed of a pliable, eloquent, burnished baritone that is capable of any effect from the sweetest of pleadings to the most potent of protestations.

His substantial physique makes him self-important and earth bound at first, but his total physical abandon in the duet with Falke was marked by hip bumps, leaps, and gyrations that hilariously suggested a cross between Baby Huey and Lola Falana. When he later impersonates Dr. Blind in the world’s rattiest wig with a comprimario twang, he has completely won us over to thinking that his is perhaps the definitive Eisenstein currently on stage. It is certainly the most animated. 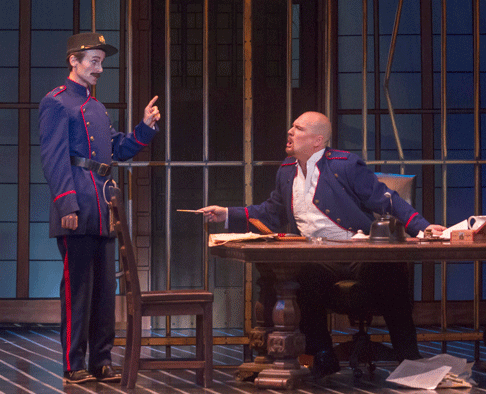 As Dr. Falke, Brian James Myer’s assured role traversal served notice once again that he is one of the finest actors and most accomplished young baritones of his generation. Mr. Myer has it all: A handsome charismatic presence, spontaneity and honesty in his acting, and a melting, rich tonal output. His Br¸derlein was creamily delivered, an affecting highlight in an evening that was rife with riches.

Elena Galv·n’s perky Adele threw off plenty of spunk and sparks, making her a decided audience favorite. Ms. Gavan’s perfectly spun, silvery soprano caressed the ear as it effortlessly soared above the staff, below the staff, and all points in between. Her accurate coloratura provided much pleasure, and her bubbly personality and wicked sense fun proved infectious. As her sister Ida, Ellen Leslie made the most of her brief moments as she showed off her bright, pure soprano.

The scent of ham was in the air as the engaging tenor Alexander Boyer snacked on the scenery as a suitably over-the-top Alfred. Mr. Boyer’s gorgeous lyric tenor gifted this role with caressed phrases, his meltingly beautiful singing only surpassed by his faux-Italian accent and shamelessly persistent romantic solicitations. Mason Gates made a good impression as the garrulous Dr. Blind, bending his substantial and honeyed lyric tenor into service of a petulant, characterful take on the argumentative lawyer.

Nathan Stark was a no-holds-barred force of nature as police chief Frank, his substantial, orotund bass-baritone ringing out with power and beauty in the house. A total performer, Mr. Stark immersed himself in a self-assured portrayal that was as winning as it was resourceful. His uninhibited carousing in Act II, and hungover reactions in Act III were among the production’s great assets. 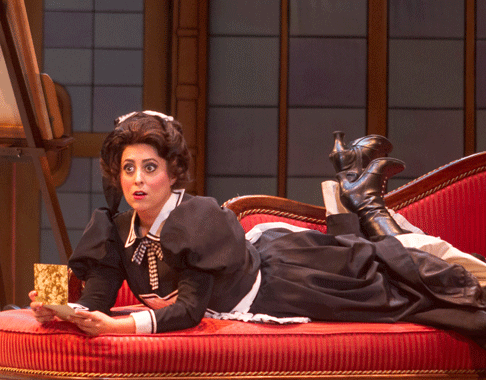 Stephanie Sanchez negotiated the pants role of Prince Orlofsky with an easy panache. Ms. Sanchez possesses a ripe, throbbing, womanly mezzo, so it is no small feat that she was able to bend it into service to suggest a bored young male character. Her/his party piece, Chacun a son gout was craftily vocalized, but it was when she could really let her voice roll out that we were treated to a major talent.

Jess Merlin’s Frosch was deprived of the lengthy schtick that usually makes Act III ten minutes too long, but Mr. Merlin’s wry, irascible performance made every moment count. Brevity seemed liberating and he scored on every beat.

While Charlie Smith’s clever set design never quite distracted from the fact that his was a unit set that was effectively redressed for three locales, it was a handsome structure, with massive walls of grid work and filigree that ably suggested the period. The show curtain with news clips about the characters made for amusing reading during the overture.

The thing that really enhanced Mr. Smith’s efforts was the sumptuous lighting design from Pamila Z. Gray. Ms. Gray used some well-considered isolated spots to really point up the action, and her use of gobos and area lighting were most effective. Cathleen Edwards has devised a rich and telling costume design, one that greatly helps to establish the societal stations of the participants. Christina Martin’s make-up and wig design were to be wholly commended, although I wondered why Rosalinde was blonde in Acts I and III, and redheaded (a better look) in Act II.

Director Marc Jacobs has concocted a fairly straight-forward staging with the complicated plotting always completely understandable, but often punctuated with whimsical flights of fancy that enlivened the experience. The audience was engaged and enchanted the whole night. Choreographer Robyn Tribuzi contrived effective dance moves for a handful of dancers who intermingled Christopher James Ray’s excellently tutored chorus, all of whom moved with commitment and precision.

Die Fledermaus has set the bar very high indeed for Opera San Jose’s 2019–2020 season, and I eagerly look forward to all that is in store.