As McCreesh himself noted, in an engaging introduction to the performance, King Arthur might be seen as a classic example of British
‘exceptionalism’ – “And we all know where that got us”.

In the 1680s and 1690s, when King Arthur was written, revised and
first staged, England was still haunted by painful memories of a civil war
which threatened to re-erupt, with the country seemingly irreconcilably
divided along political and religious lines. When Charles II died in 1685
and James II replaced him, England found itself ruled by a Catholic monarch
who had spent years in exile in France and who was intriguing with foreign
Catholic rulers. For some, James was an autocratic interloper; for
Royalists he was the true heir, destined by divine right. James’s political
misjudgements were swiftly punished: by 1688 a Glorious Revolution had
placed the Protestant William Prince of Orange and his wife Mary (James’s
daughter) on the English throne and sent James fleeing abroad once again.

Dryden’s 1684 version of King Arthur was probably a political
allegory in praise of Charles II; in 1685 the poet laureate and
historiographer royal converted to Catholicism. The Revolution of 1688 saw
Dryden stripped of his official positions and in need of new sources of
income. Dryden’s biographer, James Winn, titles his penultimate chapter,
‘The Lab’ring Bee’,

acknowledging the productivity of his subject’s final years: a revised form
of King Arthur had its first stage performance in 1691 when Dryden
was sixty years old.

But, just as some politicians hedged their bets over the outcome of the
2016 referendum, Dryden faced the challenge of adapting an opera written
for Charles II to a post-Revolution England and persuading the stage
censors that the original allegorical apparatus had been disassembled. As
his Preface states, ‘When I wrote it, seven Years ago, I … us’d the little
Skill I have in Poetry to adorn it. But not to offend the present Times,
nor a Government which has hitherto protected me (and by a particular
Favour wou’d have continued me what I was, if I could have comply’d with
the Termes which were offered me), I have been oblig’d … to alter the first
Design, and take away … many Beauties from the Writing.

Andrew Pinnock and Bruce Wood have suggested that these necessary revisions
account for some of the gaps and conundrums that challenge modern-day
editors and performers: that words not by Dryden and music not by Purcell
infiltrated King Arthur and that thematic links exist between King
Arthur and the 1691 Queen Mary birthday ode , Welcome, welcome glorious morn.

The editorial problems are many. There is no manuscript of Dryden’s 1684
libretto and no reliable source for Purcell’s music: scholar Curtis Price
has noted that instead we face ‘a confused assortment of more than sixty
manuscripts and miscellaneous publications, none of which includes the
complete music’.

When no music exists for songs which are printed in Dryden’s text, we
cannot know if Purcell’s music is sadly lost or if he chose not set the
lines in question.

These are some of the problems with which McCreesh and Christopher Suckling
have been grappling in preparing the new performing edition that we heard
at St John’s Smith Square and which the Gabrieli Consort & Players
(with almost identical personnel) have recorded and released this month. Gabrieli have been performing music from King Arthur for a
quarter of a century, and this new edition reflects their evolving
interpretation and performance practice. 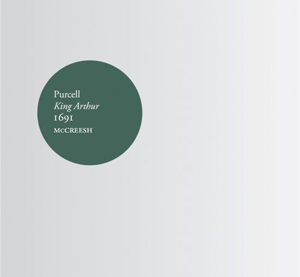 Some text has been repositioned or
reworked; musical insertions have been made, in some places in response to
gaps or ambiguities in the original sources, elsewhere to compensate for
the absence of the spoken dialogue, or to provide fitting conclusions to
the acts and masques. Inconsistencies in the various manuscripts have been
considered as performance, rather than ‘scholarly’, issues: McCreesh
explains that ‘Our singers, like Purcell’s, would naturally grace their
lines with rhythmic alterations and melodic extemporisations’, thereby
rendering the question of which textual variant is ‘correct’ moot. Having
examined contemporary sources, the decision was made to perform choruses
and dances without continuo; the songs are accompanied by harpsichord,
theorbos and guitar, without a string bass line.

The practical result of McCreesh’s and Suckling’s labours and deliberations
is a sheer delight. At SJSS the instrumental ensemble played with a
remarkable combination of fluidity and bite. The sound was so fresh and
full that one seemed to be hearing Purcell’s music for the first time.
Choruses were invigored by the boldness of oboes (Christopher Palameta and
Hannah McLaughlin) and Jean-Francois Madeuf’s baroque trumpet. At the start
of Act 5 Ashley Riches’ richly proclaimed announcement that Britannia must
“rise/In triumph of the main” was accompanied by surging strings which were
then becalmed by soft oboes as Riches’ baritone, rippling with
anticipation, foretold the appearance of the Queen of the Islands. Mhairi
Lawson’s ensuing celebration of the “fair nymph of Britain” was accompanied
by a remarkably dulcet and expressive instrumental trio (Palameta, Madeuf
and leader Catherine Martin). Zoe Shevlin’s bassoon added pastoral charm to
“Shepherd, shepherd, leave decoying”, sung gracefully by Lawson and Anna
Dennis.

Singing from memory, the seven soloists and two additional chorus members
(high tenor Christopher Fitzgerald-Lombard and tenor Tom Castle) formed a
vigorous vocal ensemble in which the independent voices blended
euphoniously while retaining their own colour and character. Jeremy Budd’s
beautifully relaxed high tenor called us “To Woden’s Hall … Where we shall
laugh/And dance and quaff/The juice that makes Briton’s bold” with such
relaxed high sweetness that who could resist the invitation? “Come if you
dare” responded tenor James Way, with good-humoured confidence and ease,
his voice borne aloft by the pungent, punchy accompaniment. In Act 3, Rowan
Pierce was a luxuriantly vibrant Cupid, waking Riches’ yawning Cold Genius.
Riches was characteristically attentive to the text, its comic nuances
exploited neatly, while the pianissimo chorus of ‘Cold People’
quivered and shivered evocatively. As the unidentified ‘He’ and ‘She’,
Dennis and baritone Robert Davies (standing in at short notice for the
indisposed Marcus Farnsworth) delivered a vibrant dramatic exchange about
the trials and tribulations of love, before joining in optimistic
rejoicing: “Let us love, let us love, and to happiness haste;/ Age and
wisdom come too fast”.

In his Preface to Albion and Albanius (1680), Dryden described
‘dramatic opera’ as ‘a tragedy mixed with opera, or a drama written in
blank verse, adorned with scenes, machines, songs, and dances, so that the
fable of it is all spoken and acted by the best of the comedians; the other
part of the entertainment to be performed by … singers and dancers’,
adding, ‘It cannot properly be called a play, because the action of it is
supposed to be conducted sometimes by supernatural means, or magic; nor an
opera, because the story of it is not sung’. Here, we had no spoken text,
and so, by Dryden’s reasoning, no ‘story’. But if a ‘narrative’ did not
emerge, then this was of no account. What we had was essentially a serious
of marvellous masques, brilliant performed, and directed by McCreesh with
an understated ease borne of familiarity with Purcell’s music and an
interpretative confidence shared by his Consort & Players.

Only in Act 5 did I have minor misgivings, when Dryden’s paean to tax
evasion and alcoholic excess, “Your hay it is mow’d”, was turned into a
raucous knees-up for country yokels jocularly waving Union Jacks: “We ha’
cheated the Parson, we’ll cheat him agen;/ For why shou’d a Blockhead ha’
One in Ten? … For Prating so long like a Book-learn’d Sot,/Till Pudding and
Dumplin burn to Pot … We’ll toss off our Ale till we canno’ stand,/ And
Hoigh for the Honour of Old England …” In riposte, the ladies of the chorus
brandished the golden stars-on-azure of the EU insignia, to the general
applause of the audience.

notes that a broadside ballad version published in 1691 has “Black-coat”
instead of blockhead and suggests that Dryden’s text would have had little
chance of getting past the censor. An alternative version presents more
moderate sentiments, “We’ll drink off our Liquor while we can stand” and
Pinnock wonders whether the ‘loutish tone’ of “Your hay it is mow’d” might
have led to it being omitted ‘sometime between 1691 and 1698 to mollify
church objectors; or the wording [may have been] cleaned up’.

Whatever, the ‘loutishness’ was a rather jarring note in this performance,
one which Anna Dennis’ subsequent rendition of “Fairest Isle”, subtly and
beautifully decorated, just about expunged, before the final chorus – an
adaptation of a trumpet song and chorus from Act 4 of Dioclesian
reworked to honour Britannia, St George and the Order of the Garter, in
imitation of the conclusion of Albion and Albanius – brought the
performance to a celebratory close.