Rosi left Japan the following year, with a sense of disillusion: “The Japanese are rotten pupils. They can’t do it – they are not ready.” But he had actually demonstrated that the Japanese could do it, and were ready, and there has been a more-or-less continuous tradition of producing Western operas in Japan ever since, one interrupted only by World War II.

In the century since 1917, a few important dates stand out. In 1927, NHK, the Japan Broadcasting Corporation, began regular opera broadcasts (just a year after Italy), greatly enlarging the audience for what was still, for most Japanese, a very novel medium. In 1934, the Fujiwara Opera Company was formed in Tokyo, Japan’s first opera company to have more than a brief existence. They managed to weather the war period and operated independently until 1981, before being merged into the Japan Opera Foundation. In 1952, the Nikikai (literally “second-generation association”) company was created, later becoming the Nikikai Opera Foundation, and, in 2005, the Tokyo Nikikai Opera Foundation. Finally, the New National Theatre, Tokyo (NNTT) was opened in 1997 specifically for the presentation of Western performing arts (Japan’s other five national theatres are all devoted to indigenous forms of theatre). It includes what is described as “the first Opera House in Japan designed specifically to stage opera and ballet,” and this 1,800-seat theatre (one of three NNTT stages) has, since 2007, been named Opera Palace. It was inaugurated in October 1997 with a specially commissioned opera by Japan’s most famous opera composer, Takeru by Ikuma Dan (1924-2001). 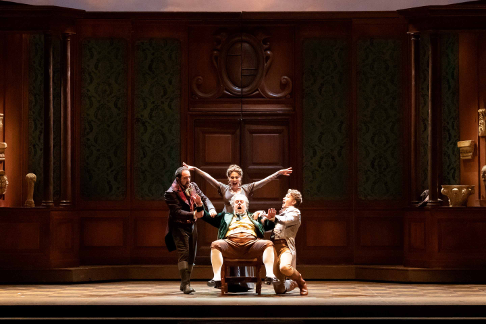 Since Rosi’s Cavalleria, some clear patterns stand out. There has been an overwhelming preference for repertoire works in Italian, though these are interspersed with a good deal of Wagner, a smaller amount of Richard Strauss, and a few Japanese operas. Japanese opera singers need to be able to sing in Italian if they are to have viable careers. The canon has been conservative: it is unusual for any opera earlier than Mozart, or later than Puccini, to be performed; rare for lesser-known composers to be staged at all. Production styles have generally been conservative too – restrained and respectful, designed to foreground the work, not the director. The number of productions is surprisingly large, but the number of performances surprisingly small, suggesting that opera in Japan – a country of some 126 million people – has a small but loyal audience. And Tokyo has always been absolutely dominant. No other Japanese city has been able to establish itself as a significant base for opera, and regional productions tend to rely on bringing in a few star singers from Tokyo. 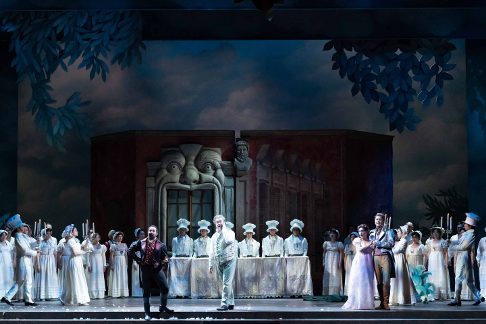 There is no doubt that the NNTT has established itself as the jewel in the crown of Japan’s current operatic scene, and it is also, thankfully, breaking down the sort of insularity that, until very recently, made it almost impossible for anyone not resident in Japan, and not conversant with Japanese, to actually find out what productions were taking place here, and to obtain tickets for those productions. The NNTT now advertises its productions in English and sells tickets online, on an English website. And in October 2018 the new and very pro-international artistic director Kazushi Ono took the truly historic step of supplying surtitles in both Japanese and English, a practice which has become standard in the present season. There is certainly no longer any reason for foreign visitors to Japan, currently numbering around 30 million a year, not to enjoy the very high-quality productions the NNTT offers, and it has been encouraging to see an increasing number of non-Japanese faces in the audience. The NNTT’s English website is here www.nntt.jac.go.jp/english 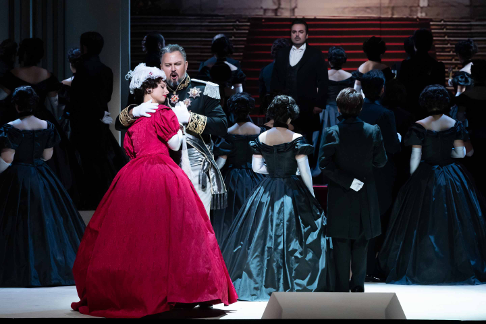 The current NNTT season began on 1 October with an unusual, very welcome excursion into Russian repertoire: Eugene Onegin directed by Dmitry Bertman. This was a new production made for the NNTT, but also a vintage one, for it was designed as a sort of homage to Konstantin Stanislavsky’s epochal 1922 production, enticingly reproducing some of the latter’s staging, centred on a very versatile, omnipresent, neo-classical portico structure. It was visually delightful and offered a striking, thought-provoking interpretative novelty by making Lensky clearly the author of his own fate: he ran forward into his opponent’s line of fire when Onegin was showing his contempt for the duel – and his humanity, too – by harmlessly discharging his pistol into the trees. There was a strong international cast with Vasily Ladyuk as Onegin, Evgenia Muraveva as Tatyana, Pavel Kolgatin as Lensky, and Alexey Tikhomirov as Prince Gremin; the rest of the cast and chorus was made up of Japanese singers. The conductor was Andriy Yurkevych, making his first appearance at the NNTT, and he led the Tokyo Philharmonic Orchestra in a ravishing reading of the score. This was unquestionably the finest production of Onegin I’ve seen anywhere and a huge credit to all involved. 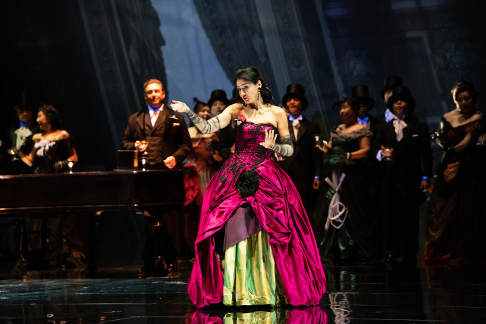 The season continued on 9 November with Donizetti’s Don Pasquale in the Stefano Vizioli production first staged at La Scala in 1994, and subsequently widely performed in Italy. This was the first time the NNTT had staged Donizetti’s comic masterpiece. Given that most Japanese would not have seen the opera before, the program contained some rather surprising statements. “Of all the opera buffa in the standard repertory, Don Pasquale is quite possibly the hardest to love,” began Mark Pullinger’s introductory essay. “It is only in appearance that Don Pasquale is a jolly opera,” began Vizioli’s director’s notes. One feared the worst, but in fact Vizioli’s is an exuberant and refreshingly “straight” take on the opera, and in his hands it was both easy to love and jolly, though the Japanese audience didn’t seem as entertained as I expected. Clearly an opera concerning an old man developing silly fantasies about a young girl who doesn’t really exist, then getting roundly punished for them, can have a serious resonance in an age of internet dating scams and the #MeToo movement. It may be, too, that Japan’s own culture of silly, but disturbing, fantasising about supposedly “innocent” young schoolgirls (see for example: “Society helps sustain Japan’s sordid sexual trade in schoolgirls” ) also conditioned the audience response. Roberto Scandiuzzi made a very fine Don Pasquale; Norina was sung by the young Armenian soprano Hasmik Torosyan; Dr. Malatesta by Biagio Pizzuti; and Ernesto by Maxim Mironov. All these principals sang and acted stylishly, conveying a delectable sense of intense self-interest, and there was an intriguing suggestion that the relationship between Norina and Malatesta was far from innocent. The smaller roles were taken by Japanese singers, and the choral scene in Act III became an extraordinarily lavish affair set in Don Pasquale’s kitchen. Corrado Rovaris conducted the Tokyo Philharmonic Orchestra with sparkling panache. 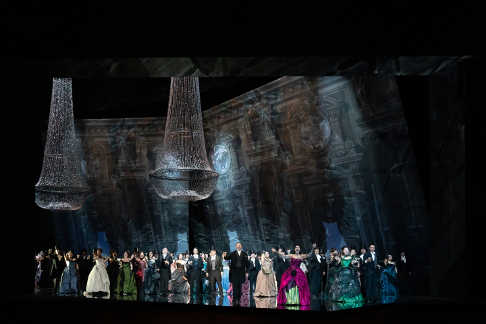 The third production of the new season, first staged on 28 November, was La Traviata – a third outing for Vincent Boussard’s production, originally designed for the NNTT in 2015. After the wonderful sets for Eugene Onegin and Don Pasquale, this seemed rather impoverished visually, relying heavily on some rather strange projections. For reasons I have been unable to fathom, Violetta’s party in the first act, and Flora’s in the second, were both set in the foyer of the Opéra Garnier, Paris, opened in 1875, a generation after the death of Marie Duplessis, the historical model for Violetta. But oh dear, the foyer of the Opéra Garnier in a rather ghostly projection AND a huge suspended chandelier! Surely, surely Boussard wasn’t trying to evoke The Phantom of the Opera, and yet it was hard to keep that annoyingly distracting thought out of one’s head. Musically, the production was a splendid advertisement for Japanese singing, for the unquestionable standout performance was local star Shingo Sudo as Giorgio Germont. His beautifully mellow, sonorous voice conveys a remarkable sense of conviction, and I think one result was that Germont’s viewpoint came to dominate the opera. This was the more the case in that Dominick Chenes made a rather ordinary, forgettable Alfredo, and in the performance I saw (1 December), Myrtò Papatanasiu as Violetta only really impressed in the third act, which was very affecting. Before that, her voice had sounded rather forced and screechy whenever volume was required. Ivan Repušić made his first appearance at the NNTT, conducting the Tokyo Philharmonic Orchestra with great authority.

The NNTT will start 2020 in a conservative fashion, with revivals of Jun Aguni’s production of La Bohème in January, of Josef Ernst Köpplinger’s Il Barbiere di Siviglia in February, and Damiano Michieletto’s Così fan tutte in March. But then in April comes Laurent Pelly’s production of Giulio Cesare, remarkably the NNTT’s first staging of a baroque opera on the main stage, and in June we can look forward to one of the most ambitious projects the NNTT has ever undertaken, a new production of Die Meistersinger von Nürnberg directed by Jens-Daniel Herzog in a joint international production with The Salzburg Easter Festival, Semperoper, and Tokyo Bunka Kaikan: this is designed to tie-in with Japan’s hosting of the 2020 Olympics. It is a good time to be an opera lover in Japan, and in time I hope the NNTT will start using its lavish financial and artistic resources to mount the great, but neglected, operas not being given anywhere else.