Arthur Waley’s translation of ‘The Old Lute’ by the ancient Chinese poet Po
Ch¸-i (772-846), which was set by Benjamin Britten in his 1957 cycle, Songs from the Chinese, is a perfect metaphor for the composer’s
quest to re-define and rejuvenate English music by re-connecting with the
great English composers of the past – a quest which was revived during this
recital by tenor Allan Clayton, guitarist Sean Shibe, viola player Timothy
Ridout and pianist James Baillieu, continuing Wigmore Hall’s Britten Series.

Much has been written of the influence of Purcell on Britten, not least by
the composer himself, particularly with regard to his approach to
word-setting, but of no less significance on the development of Britten’s
compositional voice was the music of John Dowland. Moreover, from the 1950s
Peter Pears and Julian Bream reintroduced Dowland to the listening public
in Britain and overseas; in 1963 the Aldeburgh Festival was devoted to the
400th anniversary of Dowland’s birth.

Superficially, one notices a fascination shared by the two composers with
images of sleep, the night and death, but, more significantly, during the
Elizabethan period were established vocal traditions of musical and textual
rhetoric of which Britten was a natural inheritor. Such traditions are
nowhere more powerfully crystallised than in the Elizabethan lute song, the
expressive idiom of which cohered potent musical gestures with stylised
texts and literary codes.

And, it was this ‘lost world of the lute song’ that Clayton and Shibe – the
guitarist attired in striking Jacobean doublet and ruff – revived in a
sequence of preludes and songs from Dowland’s F irst Booke of Songs or Ayres (1597). The musicians were both
seated, there was no undue formality, and the opening Praeludium
(included on Shibe’s acclaimed 2018 disc,


) delicately slipped segue into ‘Come again, sweet love doth know
invite’. Clayton’s tenor was light and airy, subtly picking out selected
words and nuances – “I sit, I sigh, I weep, I faint, I die” first swelled
with urgency, then, when repeated, retreated to a floating whisper – above
Shibe’s pristinely elaborate polyphonic accompaniment. There was a freedom
in the tenor’s manner: in latter stanzas melodic decorations and small
variants were introduced, somewhat in the manner of a folksong.

‘Away with these self-loving lads’ was notable for the naturalness of
Clayton’s delivery and the sweetness of the vocal tone. The programmed
‘Sleep, wayward thoughts’ was replaced by another unidentified instrumental
prelude to the final song in the sequence, ‘Come, heavy sleep’, the
twentieth and final song from Dowland’s book of ayres, in which the lute,
by turns expansive then secretive, complemented the voice’s weary,
melancholy wrestling with life’s cares.

These songs were beautifully presented, with ease and clarity. I missed,
however, that certain undercurrent of tension that send frissons through
the deceptively artless utterances. Such lute songs were undoubtedly sung
in the sort of intimate social and domestic setting that Clayton and Shibe
seemed inclined to reproduce here, and were also perhaps played in
solitude, the lone singer-lutenist the only listener. But, within their
professions of courtly love – the male lover addressing an indifferent or
disdainful mistress – the songs couch political and courtly themes, and
they would have been heard too in aristocratic contexts: petitions to Queen
Elizabeth I for favour and advancement, or forgiveness, conveyed through a
language of love that codifies loyalty and ambition. Clayton’s relaxed
delivery and crooning quality did not do full justice to the artifice and
artfulness of the songs. His tendency to elide words – as at the start of
‘Come away’, where the rest in the vocal line, respecting the comma in the
text, was over-ridden by a sustained legato – created a casualness which
beguiled the listener’s ear but which neglected the sharpness, wit and
oratory of the texts.

In his Earl of Somerset Masque (1614), Thomas Campion spoke of the
emotive power of such musico-verbal rhetoric: “Happy is hee whose words can
move./ Yet sweet Notes help perswasion./ Mixe your words with Musicke
then./ That they the more may enter.” We certainly find such rhetoric in
the Second Lute Song of the Earl of Essex in Britten’s 1953 opera, Gloriana, the text of which layers words by the Earl himself,
Robert Devereux, with those of a madrigal by John Wilbye: “Happy we he
could finish forth his fate/ In some unhaunted desert, most obscure/ From
all societies, from love and hate/ Of worldly folk.” It was made popular by
Pears and Bream; in 1957, the latter arranged the original harp and muted
strings accompaniment for guitar and voice, and I assume that this is what
we heard here. 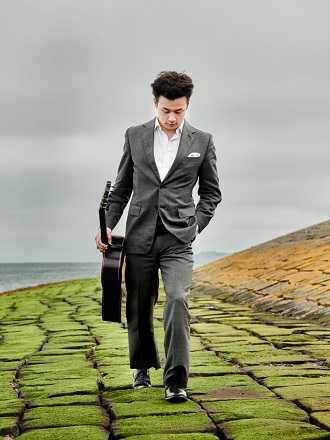 Clayton powerfully conjured the “dream, a mood, an air/ To spirit us both
away” which Elizabeth requests from her disgraced lover in the final act of
the opera. While, taken out of its dramatic context, the song’s pathos may
have been diminished, in fact time and place seemed irrelevant as the vocal
line expanded freely, ebbing and flowing, blossoming in melismatic
wistfulness: “Content with hips and haws and bramble-berry;/ In
contemporary spending all his days.” Points of rhythmic repose, as when
Essex’s sighing repetitions embody his dream that he might then “sleep
secure”, merely confirmed the transitory and illusory nature of his hopes
which dissolved into nothingness at the close of the song.

The spirit of the ‘antique’ continued in Britten’s Songs from the Chinese which were composed for Pears and Bream and
performed at the Aldeburgh Festival on 17th June 1958. In ‘The
Big Chariot’, a more robust vocal tone and fuller vibrato, aided by the
rhythmic vigour of the guitar’s weaving counterpoint, and enhanced further
by emphatic textual repetitions, conveyed the massive size and weight of
the chariot and thus the suffering it causes: “You’ll be stifled
with dust, be stifled with dust,” sang Clayton, his tenor seeming to bend
low under the heaviness of his burden, before flowering in elaborate
melismatic sadness: “Don’t think about the sorrows of the world.”

The closing couplet of ‘The Old Lute’ was especially powerful. The drooping
melancholy of the falling thirds that close many of the vocal lines,
intimating the sad decay of the old lute’s music, Clayton’s question was
more declamatory: “How did it come to be neglected so?” The guitar’s
response was disconcerting. Rapid, upwards-sweeping arpeggios presented the
answer: what the poet calls the ‘barbarous’ noise of the new instruments,
“the Ch’iang flute and the zither of Ch’in”, has turned the musical world,
quite literally, upside down.

In ‘The Autumn Wind’ and ‘The Herd-Boy’ the visual aspects of the text –
the strengthening breeze, the lilt of the ox’s tread – were enchantingly
conveyed by the accompaniment, as Clayton thoughtfully heightened the text:
“I think of my lovely lady, I never can forget”. The
textual stresses of ‘Depression’, with its heavy spondaic beat, were
brilliantly imitated by Shibe who exploited Britten’s fading gestures to
complement the singer whose “body sinks to decay”. Finally came ‘Dance
Song’, with its strange, ambiguous text and unsettling blend of vivacity
and pain; it seems to lament the loss of the mythical ‘lin’, hunted to
extinction. Waley translates ‘lin’ as ‘unicorn’ and initially the voice
presents fanfare-like motifs, “The unicorn’s hoofs!”; but, with every
repetition of “Alas for the unicorn” Clayton’s voice rose in emotional
pitch, increasingly frequent glissandi eventually climaxing in a
cry of anguish for lost love, lost youth, lost beauty … and lost music. 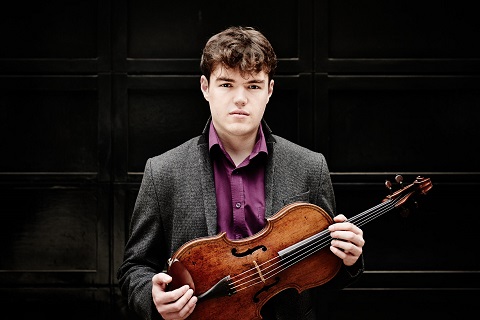 The central items of the recital saw the voice fall silent, and the past
re-born through instrumental contemplation. Lachrymae: Reflections on a Song of John Dowland was premiered by
viola player William Primrose at the 1950 Aldeburgh Festival with the
composer himself at the keyboard. Here, Timothy Ridout and James Baillieu
captured the ceremony and grace of the pavan, drawn from Dowland’s
‘If my complaint could passions move’ (which is not heard in the viola
until after the variations have been presented), while exploiting the
colours and irregularities of those variations to the full. Ridout’s tone
was by turns beautifully deep and sonorous, then more gracious, always
refined. Powerful pizzicato resounded, propelled by Baillieu’s flowing
sweeps. The absence of vibrato at the close again evoked the distance of
past worlds.

Britten returned to Dowland, thirteen years after Lachrymae in his Nocturnal for solo guitar, which is loosely based upon ‘Come,
heavy sleep’. In a mesmerising performance that was, paradoxically, both
introspective and deeply communicative, Shibe seemed to venture ‘inside’
the music itself, as the semitonal conflicts wrought themselves into ever
greater complexities before releasing their knots in tentative melodic
fragments. Britten’s resourcefulness with small means is astonishing but
Shibe’s performance held the Wigmore Hall audience spellbound. Cradling his
instrument, head bent low, the Scottish-Japanese guitarist put me in mind
of Dr John Dee: for this was musical magick, as if the spirit of those
Elizabethan alchemists had returned to play upon our ears and hearts and
minds – mesmerising us with terrifyingly quiet pianissimos, the
player almost lost in improvisatory meditations which were broken by
surprising, frightening declamations of eloquence and eeriness. The
long-for statement of the song’s theme offered little consolation, finally
fragmenting into absence and echoing in its silence John Donne’s account,
in his Sermons, of the depression and human ingloriousness that
serve as a foil to the glory of heaven: ‘an extraordinary sadnesse, a
predominant melancholy, a faintnesse of heart, a chearlesnesse, a
joylesnesse of spirit.’

Clayton returned to the platform with Baillieu to perform the three songs
that Britten composed as incidental music for Ronald Duncan’s 1945 play, This Way to the Tomb. I felt that the final item, Britten’s 1953
song-cycle Winter Words, setting eight songs by Thomas Hardy,
found Clayton reach an expressive peak. Here there was real dynamism, the
texts both poetic and dramatic: the poems may not form a continuous
narrative but the singer’s voice can unite the disparate happenings into an
intelligible whole, and so create a sense of a discourse on time. For,
there is a central ‘theme’, the loss of childlike innocence as adult
consciousness develops, and Clayton was able to suggest a persona looking
back at his youth in his later years.

Sentimentality was kept at bay in ‘At Day-Close in November’, by the
briskness of the piano’s upward flourishes which conveyed the impetuous and
passionate feeling which is present in the poem, and perhaps also suggested
the impatient pitching to and fro of the pine branches; and by the vigour
with which Clayton’s poet-speaker relived an event from his past, “I set
every tree in my June time”. In ‘Midnight on the Great Western (The
Journeying Boy)’, the tenor imbued his reflections on the lonely child who
is travelling in a third-class railway carriage, towards an unknown
destination, with compassion and intensity, as Baillieu’s imitative whistle
and steam gradually pushed forward, creating accumulating motion, energy
and unease.

‘Wagtail and Baby’ had a gentle, conversational air, while ‘The
Choirmaster’s Burial (or The Tenor Man’s Story) was beautifully
eloquent and poignant. Baillieu was a mercurial voice in ‘At the Railway
Station, Upway (or The Convict and the Boy with the Violin)’,
capturing the strangeness of the constable’s smile as the boy’s fiddle
“began to twang” and the convict’s ironic jingle rang out with guttural
grimness, and a searing crescendo that was a pained vocal grimace: “This
life so free/Is the thing for me.” In the final song, ‘Before Life and
After’, the piano’s repeated chords seemed indifferent to the singer’s
distress, progressing forwards, not allowing the voice to linger
meditatively. In the final stanza Clayton’s ever more insistent reflections
on loss culminated in a question that seemed both despairing and terrified
– “How long, how long” before “nescience shall be reaffirmed”? The open
vowel was a cry of hopelessness.

To conclude the four musicians assembled together on stage, and Britten’s
arrangement of ‘I wonder as I wander’ – the sparse inter-verse commentary
shared in turn by viola, guitar, piano – spirited us to past musical
worlds: in the words of Hardy, “A Time There Was …”