I took a long time for me to warm up to Eugene Onegin. It lacks the soaring, aching Tchaikovskian melodies that once heard, stick in memory ever after. Apart from a few passages – the letter scene in the first act, the lover’s dawn lament in the second, the feverish duet that ends the third – the vocal lines are conversational, accompanied by small motifs seemingly meaningless as smoke rings curling in the air. But with familiarity these tunelets merge and intertwine to create a hazy atmosphere of gentle melancholy that perfectly reflects a story line focused on loss, the past, the sweet pain of regret.

That truly nostalgic mood is wonderfully supported by director Tomer Zvulun’s “concept” for the staging, and Erhard Rom’s simple but versatile settings to contain it: slender beech trees against fields of grain, a gloomy winter dawn, ballrooms both provincial and majestic, which a shift of light can freeze a mundane scene into an evocative image, a postcard from the past. 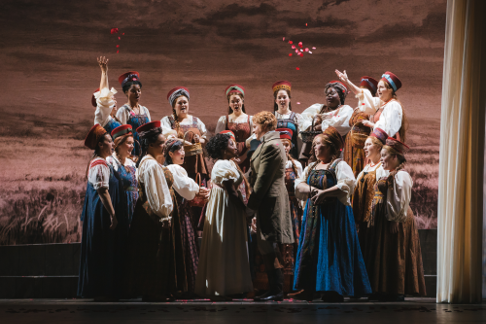 Vocally the principal singers in the two casts necessitated by Seattle’s compressed two-week eight-performance are uniformly excellent: Marjukka Tepponen highlights Tatyana’s timidity and woolgathering but rises to anguished dignity in the big duet. Marina Costa-Jackson makes her more impulsive, even a little feisty. Both approaches mesh with their respective Onegins’: John Moore bravely shows us the priggish, mannered side of Evgenyi; Michael Adams goes for the smoldering mystery that captivates his unintended victim.

Tchaikovsky’s amateur libretto gives Onegin little chance to shine until the very end of the opera. In this staging as in many others, it’s Colin Ainsworth as that innocent sap Lensky who scores our sighs and applause for his dawn monologue on the brink of extinction. Melody Wilson’s youthful voice is a little undeveloped for the near-contralto tessitura of Tatyana’s teen-aged sister Olga; I look forward to hearing her in a solidly mezzo role.

The Seattle Opera chorus – whether playing happy serfs, smug provincial dignitaries or lofty aristocrats at the Imperial court – sing, act, and move so well that the numerous dance numbers staged by Logan Pachciarz are among the greatest pleasures of the staging.

I think one opportunity is missed in this production: the chance to provide a dimension of the Aleksandr Pushkin’s original poem that is completely absent from the libretto. Tchaikovsky’s personality was complex and ambiguous but one thing he lacked utterly: a sense of irony. For him, life is no laughing matter: one loves, one loses, one suffers, and only death awaits us.

Pushkin doesn’t disagree; but his reaction to our predicament is to smile, even laugh outright, at the absurd ways we try to deal with it, and there are many moments in the action of the opera, even as simplified and sentimentalized by the composer, where such ironies lie temptingly near the surface. Director Zvulun chooses to let them pass, even when audible chuckles show that the audience gets the joke even if he doesn’t.

Still, the drama achieves tragicomic grandeur thanks to conductor Aleksandar Markovič. Taking his time setting the scene of seemingly placid country life, he minutely paces the soprano through the many musical beats of the her exalted “letter scene” to a beautiful climax. From that point onward, every scene, crowded or intimate, festive or solitary, moves the story relentlessly forward. 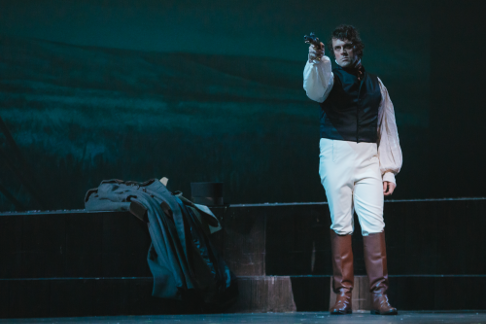 (Speaking of moving forward: Is anybody else as irritated by M. Triquet as I? His wan little couplets stop the action dead at the birthday ball in act II, just when we should be concentrating on Onegin’s fake flirtation with Olga.)

The musicians of the Seattle Symphony have long been a mighty asset in the pit at McCaw Hall; this time, under Markovič’s shaping hand, they excelled themselves, particularly the solo winds so important to Tchaikovsky’s sound palette. This is Maestro Markovič’s US debut. I hope the Opera’s general director Christa Scheppelmann nails him down for future projects before word gets out.