This composition used to also be known for the contribution of librettist John Dryden. In this adaptation, not so much. In fact, precious little seems to remain of the contribution of England’s first Poet Laureate. Pace, purists, the fact is that the story and dialogue concocted by Mr. Mitisek and Culture Clash, artisans known for their deft political satire, is almost unfailingly engaging and exhaustively inventive.

In the original, the principal characters speak dialogue but do not also sing, unless they are spirits, gods, or in one case, drunk. The original story concerned the confrontation of Arthur and the Saxons. No syrupy Camelot tale here. Happily, King Arthur’s score is some of Purcell’s most lilting and charming music, including some pretty adventurous harmonies for the time.

Truth to tell, I was discovering this piece for the first time, and what a revelatory joy it was. I am quite sure that the music had to have been substantially re-ordered to suit the concept, and it most certainly was reworded, but the score sounded fresh, compelling, delightful and insightful. Under Maestro Mitisek’s assured baton, the excellent ten-piece Musica Angelica Baroque Orchestra was first among equals in the project’s success. 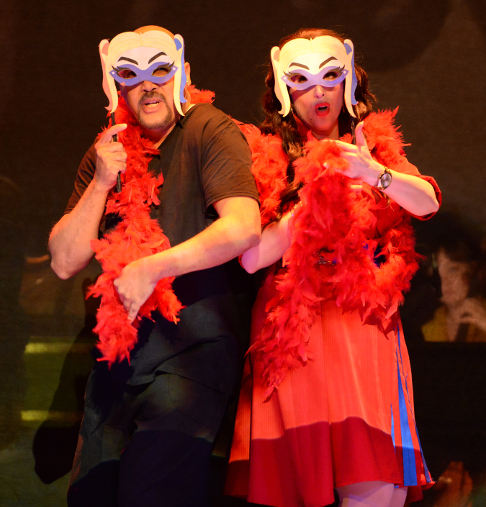 Playing with awesome stylistic acumen, impeccable intonation, and with admirable variations of color and personality, this ensemble wholly distinguished themselves well beyond other experiences I have enjoyed with period orchestras. Their solid musical achievement was the foundation that buoyed the other musical glories.

Director/Designer Mitisek has an intriguing concept for the production, teasing in the promo that it will present the royal as a comic book action hero. And that he does, but he accomplishes so much more in this fantastical staging. We first meet Arthur as a tired businessman slogging up to his humble bedside, briefcase in hand, like a beaten down Willy Loman.

As he shucks his clothing to go to bed, he reveals a comical red tee with the letter A emblazoned on it. And then, the merry confusion begins. Is the superhero Arthur all in his mind? Or maybe, in ours? It is put forth that the leading man is in a rest home at best, an asylum at worst. As the singing actor floats in and out of reality and fantasy, he ably transitions from a nebbishy speaking voice to faux Shakesperean delivery.

The nurse in the institution is Gwen E. Vere, who also doubles as the va-va-voom young princess Arthur is ostensibly attempting to rescue. A kindred inmate (or is he?) Lance E. Lot is a perfect foil and likeable action story sidekick. The wickedly appealing nemesis in the piece is the nefarious Doc Oswald.

Added to the rich subtext is the overarching theme that Arthur’s real-or-imagined quest is about fear of “the other.” Many references are made to the current immigration crisis, some more effective than others. In this version, all of the four leading characters are double threats, i.e. they perform equally solidly as actors and as singers. To this end, LBO has fielded a solid quartet of performers.

As Arthur King (sic), Marc Molomot firmly grounded the tale. Mr. Molomot is a highly skilled actor who also happens to sport a firmly delivered tenor voice. He superbly delineates between the mentally troubled inmate, and the grandiose, willful monarch. Mr. Molomot’s sizable tenor had an assured presence, and he easily filled the house with ringing tone. If his musical line lumbered a bit at first, he soon warmed into a vocal presentation of secure beauty. 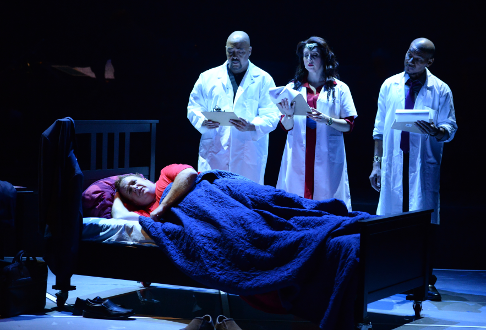 Jamie Chamberlin was a delight in her poised performance as Gwen E. Vere. It is amazing how radiantly she was able to sing with her tongue firmly planted in cheek.

After a slightly tremulous start, Ms. Chamberlin’s attractive lyric soprano fired on all cylinders, and her singing impressed with its alluring timbre and commendable musicality. Moreover, Jamie embodies a wholly committed stage persona, and is fearless in embracing the sexy posturing often asked of her.

Darryl Taylor proved to be a winning Lance E. Lott, and he ably paired with Arthur in the cleverly devised action antics. His appealing counter-tenor provided a good variety to the mix, and his aplomb with the florid passages was a joy to encounter. If there was an occasional slight rasp in his mid-voice, small matter, since the shining upper register provided much pleasure.

Movie star handsome Cedric Berry was the villain you love to hate as Doc Oswald. Mr. Berry sports an uncommonly beguiling baritone, with a very personal, warm sound. I loved his subtle menace as seducer, villain, and mad doctor. His ripe tonal production fell gratefully on the ear, and if he may have seemed just a little short on top in his first scene, Mr. Berry proved an assured interpreter, who negotiated his considerable gifts with skillful musicianship.

Back to Mr. Mitisek: As Video and Set Designer, Andreas made all the right choices. For the set, he was content to utilize the simplest of set pieces and furniture to suggest the shape shifting reality and fantasy milieus. The scrim wall separating the upstage orchestra from the action was a perfect screen on which to project Lichtenstein-like comic book figures that engaged the eye and furthered the visual presentation.

Daniel Weingarten’s imaginative lighting design seamlessly partnered the projected images, including video monologues by each of the four principals, which were among the very best elements of the technical presentation. In these one-on-one character revelations, the performers really connected with the responsive audience. I am not sure they were in the most effective sequence, but they were nevertheless, most effective.

Erik Lawrence coordinated the witty costumes to fine effect, with Denice Paxton making clever choices as the head of hair and make-up decisions. Only the sound design disappointed, with an occasionally uneven mix. These accomplished singers should not have needed any amplification, especially since the results were by turns tinny or tubby.

The announced 90-minute running time of King Arthur was exceeded by 15 minutes. The uniformly solid, concise accomplishment of the musical numbers was not quite matched by the spoken theatrics, which tended at times to amble. Long after we got the point of specific character exchanges, scenes ran on after their sell-by date.

Too, the genuinely sympathetic plight of refugees and immigrants seemed to be over played at times, straining to create resonance. I loved-loved-loved re-purposing Emma Lazarus’ words emblazoned on the base of the Statue of Liberty to a Purcell tune. This was magnificently delivered by Mr. Molomot. But then, after this stunningly sobering moment, which could have meaningfully ended the proceedings, we were back to faffing around in the ha-ha-comics arena.

There is much to be admired in this bold and resonant take on Purcell’s King Arthur. If this production is to have (as I hope) a further life, I would only urge the creators to prune and focus their laudatory message and ingenious re-working. As it is, this is already a not-to-be-missed presentation by Long Beach Opera, an evergreen force to be reckoned with in today’s opera world.

All photos by Keith Ian Polakoff