first of the ROH’s ‘Live in Concert’ performances

was fittingly somewhat sober and refined. Now it was time for some
razzle-dazzle. 67 members of the ROH Orchestra and Chorus were spread
across the stalls and along the grand tier, respectively – the first time
the Chorus, readied for performance by Chorus Master William Spaulding, had
gathered to perform together in person since the ROH doors closed to the
public on 16th March. Sir Antonio Pappano was stationed, as he
put it, “a kilometre” from the stage, in danger of falling down the Stalls’
rear exit stairs should he take a step backwards. The posh frocks and
evening attire had been aired. And, a programme of ‘favourites’, ‘big
numbers’ and ‘climactic finales’ beckoned.

The Figaro overture was punchy and, occasionally, quirky – the
fiddles’ accents had swagger, the sforzandi stamped their feet
brusquely and the tempo was well-judged, a graceful sprint rather than a
madcap race to the finish. It was Rossini’s, rather than Mozart’s, Figaro
who got the show rolling, though. Vito Priante was a forthright and
decibel-raising barber in ‘Largo al factotum’, but his bellows were a bit
‘rough-edged’ at the top and his baritone seemed a little tight; while he
loosened up for the patter, which was neat and clean, he pushed Pappano’s
baton and sacrificed tuning for volume at the close. Priante was in more
relaxed voice later in the evening, as Dappertutto in ‘Scintille, diamant’
from Offenbach’s Les Contes d’Hoffmann. This aria lies lower in
the voice and Priante’s velvety duet with the low strings was graceful and
expressive: think melted dark chocolate with a hint of bitterness.

Charles Castronovo was rather ‘full-on’ as Nemorino in ‘Caro elisir!’, both
in terms of dynamics and characterisation. The difficulty of performing to
an invisible audience was apparent: gestures and antics that might garner a
chuckle in a full house seemed over-emphatic when directed at a vacuum.
Lisette Oropesa seemed to have the opposite problem, finding it difficult
to get into Adina’s skin. Both singers fared much better in their solo
numbers subsequently.

I don’t think that Oropesa has performed the role of Amina in a staged
production of Bellini’s La sonnambula, but her interpretation of
the final scene here makes one hope that she chooses to (and viruses
permit) sooner rather than later. Her vocal control was consummate; the
phrasing was immaculate – complemented at the start by warm, sustained
horns and woodwind; her vibrato was expressive, creating nuance and colour.
She rose to the top exquisitely, lamenting, “but my tears cannot restore my
love”. Filipe Manu, a Jette Parker Young Artist, was an earnest, soothing
Elvino and, with the ROH Chorus making an energetic contribution, Pappano
held the wide-spread performers together superbly, pumping up the visceral
dynamism towards the final section of the scena in which Oropesa’s
soprano shone with joy. She’s a keen runner and, despite the passion and
intensity conjured, in conversation with the BBC’s Katie Derham immediately
afterwards Oropesa didn’t seem to have been unduly taxed by her exploits
and exertions! 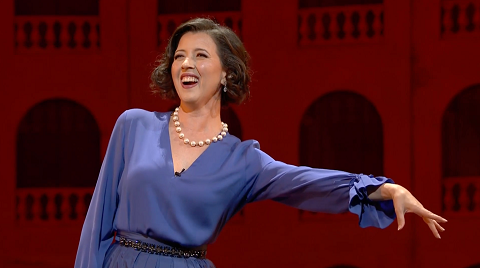 If anything, Oropesa was even finer as Massenet’s Manon, evincing
tremendous allure, gloss and power: the stamping of the ROH Orchestra’s
feet at the close warmly conveyed their appreciation. Castronovo returned
as Riccardo in ‘Forse la soglia attinse’ from Verdi’s Un ballo in maschera), singing with compelling expression,
thoughtful phrasing and dynamics, varied colour, sustained strength and
fine lyricism.

Former Jette Parker Young Artist, Aigul Akhmetshina, rose to the moment in
‘Non pi˘ mesta’ from Rossini’s La Cenerentola; her mezzo glowed
with vibrancy and her cascades were full-voiced, warm and finely
articulated. Again, Pappano’s ability to set the scene was notable: in the
instrumental preface the harmonies yearned, enriched by woodwind
interjections, the pedal points pumped like a burning, beating heart, and
recitative chords were places with absolute precision, like rhythmic
springboards. Akhmetshina returned in the penultimate item, the whole of Carmen’s final act, as a sultry and cruel Carmen, mocking
Castronovo’s desperate Don JosÈ and luxuriating in the gleam of glamour
that Priante exhibited as Escamillo. The ROH Chorus clearly relished
finally being able to give their lungs a good workout! But, alongside the
spectacle and showy excess there was tenderness and intimacy, the act
opening with some lovely tender cello playing which emphasised the
poignancy of the former lovers’ estrangement. Again, the dramatic cohesion
that Pappano mustered was impressive. 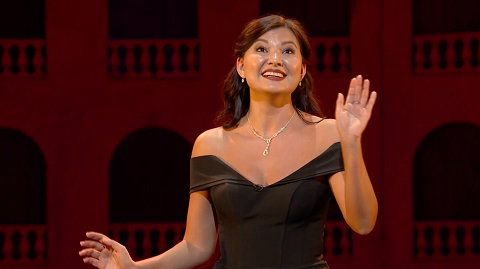 Replacing the advertised Sonya Yoncheva, Kristine Opolais sang Dvor?·k’s
‘Song to the Moon’ (Rusalka) with gleam and power, the focused
intensity and easeful expansiveness of her soprano transporting us to
another world. The tenderness, enhanced by harp and woodwind, and silvery
shimmer suggested a timelessness which was a welcome refuge from
ever-present cares. Opolais’ aria was also a cleansing reprieve after
Iago’s poison-dripping ‘Credo in un Dio crudel’ in which Gerald Finley
pushed sanity to its limits, relishing every word of the text, his baritone
black and fierce but always lyrical. Pappano brilliantly balanced
orchestral drama and details. In the final stages of Iago’s hellish
declaration, with the lower strings descending into dark, tormented realms,
Finley – one eye screwed up painfully, the other darting wildly – seemed
truly deranged. Iago’s explosion, “Heaven is make believe!”, was
terrifying.

Finley seemed destined to play the villain on this occasion, returning as
Scarpia in the final item, the Act I duet and ‘Te Deum’ from Puccini’s Tosca, alongside Opolais as the eponymous diva, Manu as Spoletta,
with Jeremy White making a fine Sacristan. Finley’s baritone was
dangerously seductive. Opolais sang with plushness and passion, though her
choice of dress did make it very difficult for her to undertake much
‘movement’ on stage – fine for the stillness of Dvor?·k’s moon-caresses but
less effective in conveying Tosca’s agitation, and exacerbating the ‘social
distancing on stage-problem’ which had prevented Don JosÈ from stabbing
Carmen, the latter forced to exit the stage to signal her demise. 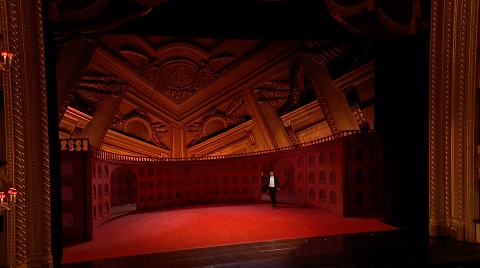 The ‘set’ for the evening was borrowed from Richard Eyre’s 1994 La traviata, specifically Bob Crowley’s curving crimson terrace
and angled gilded ceiling for the Act 2 gambling scene. The ROH didn’t take
much of a risk by laying their bets on the tried and trusted, but we’ve all
had enough ‘risk’ for a while. And, when ‘safety’ comes in this
star-studded, sumptuous and very satisfying form, it is just what we need
at present.

All images courtesy of the Royal Opera House