*Julie Taymor — and Mozart Too*
By HEIDI WALESON [Wall Street Journal]
October 14, 2004; Page D7
New York
The Metropolitan Opera usually showcases singers, not star directors, but the Met’s newest production is most definitely the “Julie Taymor ‘Zauberflote'” (“Magic Flute”). Ms. Taymor is best known for “The Lion King,” which has been running for almost seven years on Broadway, but her startlingly original visual imagination also worked brilliantly with Mozart, illuminating this complex work without overpowering it.

With set designer George Tsypin and lighting designer Donald Holder, Ms. Taymor created a compelling universe for “Flute.” Mozart’s last opera, with sung and spoken text by Emanuel Schikaneder, mixes grandeur, pathos and whimsy. Unlike many directors, who often slight one for the others, Ms. Taymor succeeded in making all those elements work together. She understood that the grand Enlightenment scheme of the opera is about the journey from darkness into wisdom. In the ideal union of Tamino and Pamina, sense and sensibility temper and strengthen each other. Ms. Taymor’s nonrepresentational world, explored through creative combinations of materials (glass, steel and billowing silks) and light made those themes clear while maintaining the humanity of the characters.
The production exploited the Met’s sophisticated stage machinery to create the fears and confusions of that journey, for the path to enlightenment is not easy. Four large transparent squares, each with a different geometric opening (a triangle, a square, a large circle and a small one) at the center, first appeared independently, circling on the stage turntable. But as Tamino, Papageno and Pamina stumbled along, they moved to create jagged angles and dizzying kaleidoscopic vistas. “Where am I?” the characters often asked, and in this world of hard edges, strange reflections, darkness and no recognizable landmarks, it was no wonder. No wonder, also, that when they found each other they clung together, only to be torn apart again. Ms. Taymor even captured the terror of the final trials of fire and water with two proscenium-high figures, their helmets filled with flame, that guarded the portal.
[Remainder of article *here* (subscription to WSJ Online required)]

*Die Zauberflöte, Metropolitan Opera, New York*
By Martin Bernheimer [Financial Times]
Published: October 13 2004 03:00 | Last updated: October 13 2004 03:00
Graceful geese swoop through the black sky. The baddest of bears prance about the proscenium with surreal bonhomie. Exerting stylised menace, a collapsible serpent stalks the puny hero. Blissful storks traipse the boards sur les pointes. A flying lobster snaps its claws at a would-be devourer.
The basic set, constantly evolving and revolving, evokes a pyramid locked in a gigantic ice-cube. It’s a fantastic show. It’s Julie Taymor’s Die Zauberflöte. It may not be Mozart’s.
With her inspired accomplices (set designer George Tsypin, lighting director Donald Holder, puppet-master Michael Curry, choreographer Mark Dendy), Taymor has left no turn unstoned in her effort to make the old operatic fable look nifty. She invokes all manner of scenic mumbo-jumbo to tell the tale on her own cleverly picturesque terms.
[Remainder of article *here* (subscription to Financial Times Online required)] *Taymor’s ‘Flute’ is utterly enchanting*
By HOWARD KISSEL [New York Daily News]
DAILY NEWS CRITIC
Monday, October 11th, 2004
Although Mozart’s “Magic Flute” is one of the most sublime operas ever composed, in its own time it was most definitely part of Show Business.
That’s why it was a brilliant idea to have Julie Taymor (Broadway’s “The Lion King”) direct and design a sorely needed new production for the Met. It opened Friday night and has a performance tonight.
In contrast with other opera directors, Taymor’s soaring imagination is always at the service of the composer. Her production captures the grandeur of the work and is also, hands down, the best show in town.
Unlike other Mozart masterpieces, which were written to be performed at court, “The Magic Flute” was intended for a theater with a box office.
Despite its allusions to the ideals of the Enlightenment and to Masonry (Mozart, his friend Haydn, and Emanuel Schikaneder, who wrote the libretto, were all Masons), “Flute” is at heart a fairy tale. As such, it was a boffo hit in 1790 and has remained so ever since.
In her costume designs (and in the imposing sets of George Tsypin), Taymor conveys both the somberness of the ideas that underpin the plot, as well as its delicious fancifulness.
[Remainder of this article *here* (no subscription or registration required)] *Amadeus Ex Machina*
Chagall and Hockney have already had their way with Mozart’s Magic Flute. Now–cue the kite puppets –it’s Julie Taymor’s turn.
By Peter G. Davis [New York Magazine, October 25, 2004]
Mozart’s music may not always take second place when the Metropolitan Opera stages The Magic Flute, but–at least as long as I’ve been around–the productions have been mostly defined by their sets and costumes. And, true to form, the big buzz over the latest Flute centers on Julie Taymor, Tony-winning director of The Lion King, and her take on this immortal operatic fantasy. No wonder, since her Asian-influenced sense of theater, with its kite puppets, animal imagery, and masks, together with set designer George Tsypin’s translucent geometric shapes and sculptures, give the eyes plenty to take in. To judge from the roars of approval on opening night, audiences will be finding new visual marvels to savor in this production for many years to come.
Yes, Taymor’s stage is a very busy one, but not so frantic as to obscure what is at heart a fairly traditional approach to the dramatic action. Sarastro and the Queen of the Night, their mythical realms located somewhere between the sun and the moon, are clearly depicted in a pitched battle between good and evil; the young lovers Tamino and Pamina are tested, grow, and become wise through their adventures; everyday folk like Papageno and Papagena remain endearingly unaware of life’s mysteries as they eat, drink, and make babies; and illusion is omnipresent as the characters wander through a world where humans of all ethnicities mix in surroundings that remain in a constant state of magical mutability. The stage pictures are dazzling, but the real wonder of Taymor’s production is how precisely movement is counterpointed with music to reflect the enormous emotional range of Mozart’s score, from slapstick comedy to solemn spirituality.
[Remainder of article *here* (no subscription required)] *Staging note:*
The Stilts Beneath Their Wings
By DANIEL J. WAKIN [New York Times] 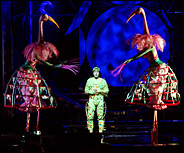 Mark Mindek walks into the Metropolitan Opera as a 5-foot-11-inch dancer and walks out onto the stage as a 12-foot dancing bird. He and a fellow dancer, James Graber, play two of the Julie Taymor-created creatures that flirt with Papageno, the girl-crazy bird catcher of Mozart’s “Magic Flute,” in the second act of Ms. Taymor’s new production at the Met, which has performances on Monday and Thursday. How do the dancers manage to reach and lunge while tottering on stilts?
[Remainder of article *here* (subscription required for archived articles)]
*Recommended recordings:*