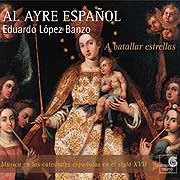 Interest in the music of “New Spain” (the Spanish colonies in the Americas) has blossomed in the last decade, with a number of fine recordings of sacred music composed by musicians who emigrated to the New World in support of the mission of the Catholic church. A parallel interest in the music of those who stayed in Spain – indeed, who set the tradition that was exported to the Americas – has been slower to build, so this recording is especially welcome, since it provides an opportunity to hear a tradition seldom performed outside of Spain, whether in the Baroque era or in the present.
Spanish music of the seventeenth century has been characterized in history books as “conservative”, and it is perhaps true that the works featured on this CD often reflect a sensibility that hearkens back to Renaissance harmony and counterpoint: absent are the virtuoso fireworks of the Italian tradition, nor do we encounter the subtly shifting ornamentation and rhythmic nuance of the French “not-Baroque”. Because of this relatively counterpoint-oriented tendency in the repertory, the instrumental tracks are the least outstanding musically – though they are played sensitively, bringing out the details of the complexity of texture that seems to be a hallmark of Spanish instrumental works of this era.
The vocal tracks, however, are truly wonderful – musical phrases are often simple and short, which could lead to monotony, but in the hands of Al Ayre Espanol becomes an opportunity for the display of a wide variety of timbres and scorings. Typical of the Spanish basso continuo ensemble was heavy used of plucked and strummed instruments – especially guitars and harps – and this feature not only suits the excerpts remarkably well but also provides a new soundscape for those of us more used to harpsichord or even theorbo / chitarrone accompaniment. Especially in the villancico A batallar estrellas (“To battle, stars”), which gives the collection its title, the rhythmic drive of the rasgueado (strummed) guitars energizes the quick alternations of solos and chorus, resulting in a musical experience unlike any more “mainstream” Italian, French, or German work from the time. No wonder that this tradition became such a crucial part of the message of Catholicism in South America!
The ensemble approaches this repertory with energy and passion: it is clear that they particularly enjoy the characteristically Spanish genre of the villancico, and works in that genre are the absolute highlights of this recording, each singly worth the price of the entire collection. Some tracks are more tightly executed than others; the soloist countertenor, in particular, appears to strain and his vocal style is not especially refined – which works perfectly in the more “rough and tumble” pieces such as the villancicos, but a little less so in the more staid motet Maria Mater Dei. Soprano soloists are more uniformly excellent, and employ a wide range of techniques – including a well controlled vibrato and what seem to be pointedly “Andalusian” musical swoops – to remarkable effect. Balance between instrumentalists and vocalists is well calculated, and the recording itself seems to be technically solid, with no problematic audio issues. While not every track of this recording bears repeated listening, it is a crucial addition to the library of those who love the Baroque and want to expand their repertory of seventeenth-century soundscapes.
Andrew Dell’Antonio
The University of Texas at Austin