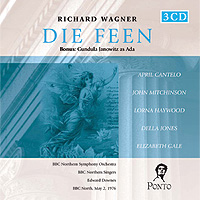 How narrow-minded can one be ? Very much so in the case of Richard Wagner who succeeded in not mentioning once the name of Verdi in all his writings. And is not his decision to banish his early youth works from the Bayreuth-barn rooted in that same mentality ? Of course during his lifetime he was the subject of many attacks and maybe he feared to be the victim of ridicule with critics dissecting every bar of Die Feen, Das Liebesverbot and Rienzi and looking for influences of other composers. Rienzi and Liebesverbot had been staged while he lived but Die Feen was only known by a few selections and he never took pains to have his first opera performed at a time when he could easily have done it. Die Feen was premiered 5 years after his death and then led a rather undistinguished life of a few performances. Still the amount of bigotry of his successors is even greater, considering that Siegfried Wagner himself was a composer of fairy tales and should not have respected his father’s wish not to perform Die Feen. The grandchildren complied as well though one can understand their motives. As Wagner lost some of his hallowed reputation during the fifties and the sixties, the stock of Verdi rose very high indeed and maybe it was not in the Wagners’ interest to show the more amateurish trials of granddaddy. Eva Wagner, Wolfgang’s estranged daughter who should have succeeded him long ago, was the first to offer a business plan for a new New Bayreuth where Die Feen, Rienzi and even the operas of composers who influenced the maestro would have their place. And then music lovers could at last hear and see what the fuss is all about if there is something to be excited about.
Well, there is. The overture is a gem, all of its 11 minutes and almost worth the purchase of the set. Yes, it’s easy to trace the influence of Mozart and especially Weber but 20-year Wagner had a voice of his own as well, different from that of his contemporaries. Wagner was twelve years younger than Lortzing who could easily have treated the same fairy subject but one immediately hears the far richer orchestration, the ease Wagner has in composing more complicated arias and ensembles. And one regrets somewhat that the mature Wagner gave his best tunes to the orchestra instead of sticking with the singers like the youthful composer still did in the old tradition.
In the meantime all we have are a few recordings of Die Feen, all four of them live-performances. The recording under review appeared as a 3 LP-set on MRF 146 in 1977 though without the bonus tracks which derive from an abbreviated concert-performance given in Vienna in 1983. Let me state from the outset that the better is the enemy of the good and that the appearance of bonus tracks on so many CDs is not always an asset. Often the bonus has some better things to offer than the complete work and that’s a little bit the case here. Gundula Janowitz had been singing for 24 years when this performance was recorded and the gleaming silvery sound had dulled somewhat but still she has lots of voice, conviction and a free ringing top to offer. It is one of the very few records of tenor Josef Hopferwieser, a Viennese Volksopertenor who proves that a good rounded voice and incisiveness can go together without having to bark or to shout which would not be tolerated in a difficult genre as operetta (I heard him as Sou-Chong in that theatre). Therefore it’s a bit of a pity that this version of Die Feen was not performed in its entirety and duly recorded. Mind you, that shouldn’t restrain you from purchasing this very well sung BBC-version by somewhat all-purpose singers like tenor John Mitchinson, an astonishingly versatile tenor who compensated for the lack of beauty in the somewhat beefy voice by his musical understanding and his skill in singing everything between Händel and Strauss and singing in an acceptable pronunciation as well. Though April Cantelo in the title role of Ada is not in the same voice class as Janowitz, she nevertheless gives a sensitive and beautiful performance, easily dominating the many concertati. Lorna Haywood is a lovely Lora and Della Jones sings a rich Farzana.
In the end choosing a recording of Die Feen comes down to one’s own priorities. On several sites you will note that this is the cheapest set with the added attraction of many fine bonus tracks. The singers are as good and personally I think somewhat better than tenor Sirkia and soprano Patchell on Dynamic’s set. Edward Downes paces the music extremely well and has a better orchestra than the Cagliari Orchestra on Dynamic’s. That set however has the advantage of a libretto instead of just a sleeve note.
Jan Neckers