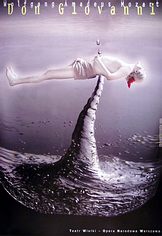 Ryszard Horowitz
Don Giovanni, Grand Theatre, Leeds
Published: January 20 2005 02:00 | Last updated: January 20 2005 17:12
After some wild recent productions it comes as a surprise to find a Don Giovanni set in Spain, as Mozart intended. How many directors care to remember that Don Giovanni’s tally of women there numbered 1,003, as Leporello’s catalogue reminds us every time we see the opera? Having decided on a Spanish setting, Opera North’s new production tries to make the most of it. Photos of bullfights are flashed across a screen to draw a glib parallel with Don Giovanni the predatory sexual toreador. The cast gird their loins for some rather dubious Spanish dances. And — most important — the time is updated to the Spanish Civil War, bringing the class antagonism of the opera into modern focus.
All these presumably looked promising ingredients, but Olivia Fuchs, the director, has made a right paella out of them. Whatever political message she was hoping to elicit is scuppered before the interval, when the aristocratic Don Giovanni is found entertaining the leftwing sympathisers to a black-tie ball. (Which side is he meant to be on?) Throw in a set that comprises three ladders against a blank wall and a laddish translation apparently hatched in Ilford c.1985 and all pretence at period Spanish colour is lost.
[Click *here* for remainder of review (subscription to Financial Times online required).]