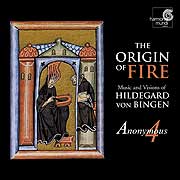 This last in the contributions of Anonymous 4 to the performance of medieval music is a selection of thematically related texts – most by Hildegard von Bingen – dealing with a spiritual or religious fire. Those renditions of traditional hymns, such as “Veni Creator Spiritus” and “Veni Spiritus eternorum alme,” are interspersed with works of Hildegard’s composition. Some of these are based on her prose visions, e.g. “Et ego homo non calens,” identified topically as “The fire of creation,” a depiction of which is also used for the cover illustration. The prose texts are provided with musical adaptations of plainsong by Anonymous 4. “The fire of creation” was performed using plainchant, and Hildegard’s vision “The fiery spirit” was adapted to a two-voice lection tone from Christmas matins of Polish origin.
A number of works by Hildegard chosen for performance here reflect both text and music by the author. These are made up, for the most part, of antiphons, sequences, responsories, and hymns. Some of these works are of a more general character and not typical of specific liturgical feast days. The antiphon, “O quam mirabilis est,” sung here in a seamless performance of ascending melodic surges with effective melismatic decoration, concentrates on praise of God as the creator of mankind. Because of Hildegard’s association of creation with fire elsewhere, the inclusion of such related texts here is certainly appropriate.
Perhaps some of the most interesting of Hildegard’s compositions featured here deal with the Holy Spirit in varying depictions. The lengthy sequence, “O ignis spiritus paracliti,” sees the Paraclete associated with fire and as the origin of all life. In this work the hope of humankind rests with the Spirit as defender, and the military imagery is especially striking (“O breastplate of life”). This metaphor is continued as the Spirit is called upon to defend those in the power of the enemy and to free those bound prisoners destined to be saved by divine sanction. The sequence concludes with an evocation of the Spirit granting light. The compelling performance here of the work by Anonymous 4 suggests praise of the Spirit which pervades the entire sequence while conceding – at the same time – the power of the divinity.
In keeping with this tone of military power for the Spirit, Anonymous 4 has chosen another of Hildegard’s large-scale works on the Holy Spirit, the hymn “O ignee spiritus” (“O fiery spirit”). In this work the praise of the Paraclete is at first primarily suggestive of spiritual and intellectual support. The power of the Spirit suddenly rises up wielding a sword and declared ready to cut off the threat of evil. Again and again the spirit confronts these dark forces and helps to support reason which may have succumbed to them. As a reminder of this power inherent in the Spirit the hymn finally invokes the lost angel whose tower of pride was cast into hell.
The recorded legacy of Anonymous 4 is an especially rich panorama of both secular and sacred medieval music ranging from love songs to saints’ lives. Their work has done much to rekindle interest in certain neglected aspects of early music performance. With the present recording of Hildegard’s music and visions her works have been made more accessible and can be appreciated through such carefully planned and executed performances.
Salvatore Calomino
Madison, Wisconsin