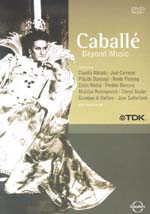 Monserratt Caballé’s journey to La Scala and the Metropolitan Opera was truly a road of talent, dedication, and will. One of the most beautiful and athletic voices of our generation, declared as Callas’ successor, Caballé dominated both the dramatic spinto and bel canto arenas, transcending the realm of the opera world to influence the popular masses.
EuroArts’ DVD documentary Caballé: Beyond Music follows Caballé along the singer’s path to success. Opening with Caballé entering her childhood conservatory of Barcelona, we witness the very roots that have supported her throughout her career. She talks warmly about memories of her teacher, the endless hours of practice and study, and those rare moments sneaking into the concert hall to sing. Her story is that of Cinderella; growing up in a poor family during post World War II, her family could no longer support her studies until the Betrand family, a wealthy Barcelona family influential in the arts, came to provide for her. On a whim, the family had Caballé sing for Conchita Bodia, a famous Lied singer and prized student of Granados. Bodia became her mentor and teacher, instilling in her a love for the songs of Strauss.
We follow Caballé as she recounts her first audition tour at the age of 23. Though told to go home and have children, Caballé found the strength in her to continue and secure a place in the opera house of Bremin, Germany. There she developed her prize roles of Mimí, Butterfly, and Violetta, and a firm foundation as a house lead singer. Her overnight success is attributed to a quick cover for a pregnant Marilyn Horne singing Lucrezia Borgia at the Met. From there, Caballé moves on to Covent Garden, singing Zeffirelli’s Tosca, Norma at Paris Opera, and Semiramade at the Festival Aix-en-Provence.
This documentary delivers video footage of scenes from Adriana Lecouvreur, Tosca, Norma, and a duet with Marilyn Horne from Semiramade. We also hear from established artists and close friends of Caballé, including Claudio Abbado, José Carreras, Plácido Domingo, Renée Fleming, Zubin Mehta, Freddie Mercury, Mstislav Rostopovich, Cheryl Studer, Giuseppe di Stefano and Joan Sutherland. EuroArts also includes footage of live concerts with her daughter, soprano Montserrat Marti, as well as a performance with Freddy Mercury at the opening of the 1992 Olympics in Barcelona.
It is clear that Caballé was truly one of the top performers of our time. She says, “When a singer truly feels and experiences what the music is all about, the words will automatically ring true.” With a voice of angel, executing a pure, spinning piano at the top of her range with endless phrasing, she always aimed to be of service to the composer. Yet, EuroArts is able to take us beyond the performance to find the warm and endearing woman that is Caballé.
Sarah Hoffman