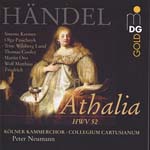 I have long been accustomed to the grumblings of my German and Italian colleagues concerning the pronunciation and expression of musical works in their native languages by English-native singers and choirs. I had chalked it up to benevolent xenophobia, but this beautiful recording gives me new insight into their perspective.
I should first start with pointing out that this is an inherently valuable project since it is one of a very few recordings of Athalia available (though an extraordinary Academy of Ancient music performance released more than two decades ago, with Dame Joan Sutherland in the title role, is still available) — and it is arguably the best recording yet. Given the proliferation of Messiah and Jephtha CDs, it is great to have this gem available to complement the plentiful offerings of more well-known oratorios. This early example of the genre is all the more interesting to those of us who know Handel’s later choral works, since it is so clearly indebted to the English anthem tradition on which Handel drew self-consciously in his invention of the “English Oratorio”. Choruses from his later and more famous oratorios contain large and elaborate polyphonic passages, as Handel brought to bear his chops as Lutheran sacred composer; here the choruses are for the most part lighter and more homophonic (but equally grand) in the style of the anthems of Purcell and Blow. In these passages, the ensemble brings out the wonderful subtleties of texture, and the crispness and flexibility is as remarkable as the apparently effortless beauty of tone and tuning.
The soloists also have spectacular voices, and the recording space chosen absolutely brings out the resonance and individual color of each voice (with three sopranos as leading roles, this is important to follow the interaction between the parts). But here is where I join the curmudgeonly perspective of my German and Italian friends: the English pronunciation is uniformly quite stilted, and the singers (with the exception, interestingly, of native-English speaking Cooley) seem to revel in their tone quality to the point of sacrificing enunciation and clarity of text. Martin Oro, in particular, has a delightful counter-tenor, but does not seem too concerned with the fact that the words he is singing have consonants as well as vowels. Granted, the stereotype of “the early music sound” as requiring complete subservience to enunciation, to the detriment of beauty of tone, is fortunately a thing of the past. Still, especially in the recitatives, this reviewer might have wished not to rely on the printed libretto in order to understand the words.
In any case, the linguistic awkwardness does not in any way take away from the supreme beauty of the soundscapes that Neumann and his ensembles — and the silver-voiced soloists — create. Each of them has a marvelous sound, and the contrast in dramatic character between the evil queen Athalia and the pure Joas and Joad are conveyed with great expression. But if the listener’s native language is English, there should be no expectation of being able to follow the story without reliance on the booklet (which is very well prepared, with great background on Athalia and some thoughtful comments on performance practice). Of course, that doesn’t generally bother us when we sit down to enjoy a recording in a language that we don’t know well, so perhaps this is proper payback for the self-assuredness with which English singers have butchered other European languages for a very long time.
All in all, a beautiful and much-recommended recording, a great companion to a CD of Messiah or Jephtha to bookend a Handel-lover’s collection of the remarkable genre of English Oratorio.
Andrew Dell’Antonio
The University of Texas at Austin
[Editor’s Note: Click here for a discography of Athalia and other oratorios by Handel. No claim is made regarding its completeness.]