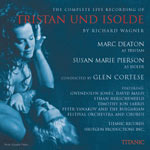 After playing a few tracks I was reminded of the late Harold Rosenthal’s review of a 1973 Callas and Di Stefano-concert in his own Opera Magazine: “This is one of the saddest reviews I ever had to write.”
I looked this set up on Amazon and duly noted that it sold for $57.98 while most critics’ favorite set (not mine as I still prefer the Flagstad-Melchior-sets, heavy cuts and less than perfect orchestral sound included) is $20 cheaper (Nilsson, Windgassen, Böhm on DG). And a full-priced set like this one under review should surely have a libretto, which is conspicuously lacking. There are some 35 complete Tristans available and I utterly fail to see what this one can add to one’s pleasure in exploring this score. And soon there will be another competitor with Placido Domingo.
Let’s tackle the bull straight on. No Tristan is acceptable with such a pair of lead singers. The unknown tenor Marc Deaton could be acceptable in a very small provincial house in Europe or in one or another summer festival in the backwoods of the United States where opera lovers flock to who normally only have their Met radio performances. In those meager circumstances people are often grateful that at least for once they get the possibility of hearing a performance in the house and will almost accept anything. But on record one simply doesn’t understand the reason this performance had to be immortalized. Mr. Deaton’s is a small lyric sound, pitifully devoid of beauty in tone, volume, top notes etc. in short somewhat of a very poor man’s Windgassen. Moreover though the initial heavy vibrato becomes somewhat less during this concert performance the voice is completely overwhelmed in the love duet and becomes a long and painful “geschrei” just to hit the notes. No intelligent treatment of the words (and Mr.Deaton’s German is rather good and quite understandable), no acceptable phrasing and some fine diminuendi in Tristan’s long death scene can redeem the basic colorless and the forcing and gliding and thinning out of the voice on any note higher than middle F.
His Isolde, soprano Susan Marie Pierson, is slighter better known but the joy of hearing her in this whale of a role is not any greater. The basic voice is not bad, be it a somewhat indistinctly colored sound in that generalized Anglo-Saxon way that makes it so difficult to distinguish one singer from another. Still such singers often have a full workload in Europe as most general managers nowadays want to have their own Ring and their own director with his own concept. They say openly there are no real Wagner singers at the moment and still they persist in programming Tristan or Der Ring as the producer’s concept is more important than the sometimes painful sounds on the scene. Therefore there is always a heavy demand for singers just able to overcome an evening of heavy singing. For a few years Brünnhildes like Mrs. Pierson go from here to there until the voice inevitably wears down and the career suddenly is over. The soprano’s voice reminds me of Susan Owen’s lirico who also specialized in heavy Wagner and whose voice so deteriorated in a few years time that last year she met with the ultimate disaster for any singer. During the Liège Walküre the house didn’t whistle or booed; no, people just openly laughed their hearts out at the produced sounds. Mrs. Pierson is still in somewhat better shape but the great killer is already there: the persistent beat throughout the range and some more severe critics wouldn’t hesitate and call it a wobble that takes away much of the pleasure. And then there is something sharp even edgy to the voice that sometimes make for painful listening.
I don’t suppose anybody ever bought a Tristan und Isolde for Kurwenal or Brangäne, though they are singers on a par with their role. I still remember David Malis winning the BBC’s Singer of the World competition in 1985 and at the time I was sure he would go far. Well, he didn’t, though it surely was not for having lost his voice. It is well-rounded, warm, even beautiful and he makes the most of his role. Gwendolyn Jones as Brangäne has a good mezzo though somewhat sharp at the top. Apart from Malis the best performance is given by conductor Glen Cortese at the head of a so-called festival Bulgarian orchestra. He paces so well, never lets the attention flag, doesn’t indulge himself in overly slow or fast tempi and he never drowns his singers. The sound even slightly favors them though all orchestral details are clear. But why, oh why, was this set published in the first place?
Jan Neckers