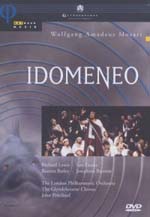 In 1934, John Christie launched an institution of English musical life with Fritz Busch and Carl Ebert: The Glyndebourne Festival. Since 1951, the Festival has staged four productions of Mozart’s Idomeneo (1781), the most recent being in 2003.
Listening and watching a performance almost thirty years after the event is in some respects like Monday morning quarterbacking. It is good to keep in mind that at the time of this performance, the study of historical performance practice was still in its nascent stage and Mozart research was, by today’s standard, still in its youth. More significantly, the re-discovered performing score of 1780/81, used by the composer, was not available in 1972 when the Neue Mozart Ausgabe score of Idomeneo was published. To speak of a single definitive Idomeneo is difficult because of the many variants and alternatives that Mozart composed for this opera.
This 1974 production, the third staging at the Glyndebourne Festival, takes editing liberties of its own to fit a four-hour opera into two hours, without the ballet. Act I begins with scene eight, skips Idamante’s aria Il spadre adorato, and segues to the Intermezzo, which is also edited. The remaining two acts are similarly edited, omitting recitatives and abridging the arias. Program notes attempt to fill the void.
Act II scene one, uses the opening scene composed for the 1786 performance in Vienna, namely, a recitative between Idamante (Leo Goeke) and Ilia (Bozena Betley). Goeke sings the aria that follows accompanied by an obligato violin, both of which are disappointing. Act III is the most dramatic and was the most appealing to Mozart–“there is hardly a scene in it which is not extremely interesting.” (3 Jan 1781) Elettra’s final aria (Oh semania! Oh furie!), which always “brings down the house,” is considered by some the best in the opera. This performance by a young Josephine Barstow does not disappoint, either vocally or dramatically, and illustrates why the soprano is today one of the Grand Dames of opera.
Mozart referred to this work as his “Munich opera” or his “grand opera” (meine grosse oper), but not as an opera seria. Composed for the celebration of carnival in Munich (1781), this work differs from the traditional opera seria most noticeably in its musical continuity and the exquisite ensemble writing, a hallmark of Mozart’s operas. Regrettably, the vocal ensembles are not at their best in this performance. Markedly, the quartet Andro ramingo e solo, which moved Mozart to tears, neither draws in the listener nor elicits a depth of emotion.
The sound of the orchestra is not always even, a fault of the recording. The overall vocal performances are good but not stellar, and there are moments where intonation is uncertain. Richard Lewis, the first English Idomeneo in the 1951 production, and Leo Goeke are wanting; their acting and characterizations are stiff and uninspiring; posed and bland. Unfortunately, this seeps into their singing. Goeke however, finally breaks out of the box in the last scene, giving more drama and voice than previously heard. Bozena Betley and Josephine Barstow dominate the opera both vocally and dramatically. Barstow’s performance as the lascivious, vitriolic, and frenzied Elettra is a total package; she does not miss a beat. Bozena Betley’s coloratura is remarkably natural; she is at her best in the Act II aria, Se il padre perdei.
The set design by Roger Butlin is reflective of the 1970s. A receding series of rings/arches–reminiscent of depictions of time warps–frame an already small stage, making it seem even smaller. Halfway through the opera, one might feel claustrophobic. It is only in the last scene of the opera that their purpose becomes clear: the interior of Neptune’s temple. It is not worth the wait. The backdrops capture some of the splendour of opera seria, the pastoral scenes are quite pleasing; the storms are effective but the sea monster–called for in Mozart’s original directions–is disappointing, bordering on the ridiculous. The chorus, whose overall performance is good, delivers one of its better scenes at the end of Act II with the appearance of the sea monster. Its effectiveness is compromised however, by the staging which has the chorus seemingly fettered to their places as they sing “let us run, let us flee.” When they finally do leave the stage, it is simply too orderly for a citizenry fearing for its life. It seems that the size of the stage, once again, contributes to the problem.
In 1974, this John Cox production did not thrill the operagoer. Thirty years latter, it is still a “mixed bag.” It is the performances of Dame Josephine and Bozena Betley however, that are worth the view.
Geraldine M. Rohling