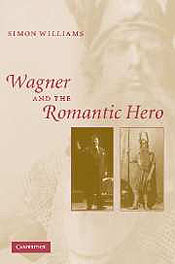 There is no doubt that Richard Wagner as an artist, composer, and writer was the center of controversy both during and after his lifetime. Despite the overwhelming political, social, and psychological elements contained in his musical oeuvre, Wagner is one of the more enduring figures in the history of the arts. Based on lectures delivered at the Bayreuth Festival between 1998 and 2000, Simon Williams examines a topic that has generated much interest and scrutiny both within the arts and outside of it: Wagner’s treatment of the hero.
The book is organized and structured around all thirteen of Wagner’s stage works, exploring the concept of “hero” and “heroism” in each of these works. The author begins by defining “heroism” in the context of Wagner’s time period and its implications for use by Wagner. The author then discusses each of Wagner’s works in turn, and concludes with a discussion of modern interpretations of Wagner’s works and how the Wagnerian hero and the idea of heroism are presented and realized in modern productions of his works.
In his introduction, Williams discusses the concept of heroism in the nineteenth and twentieth centuries, and quickly moves into a short summary of the book. Williams indicates that in his examination of the literary, theatrical and operatic culture of Wagner’s works, he can identify three modes of heroism: romantic heroism, epic heroism, and messianic heroism. The author divides Wagner’s oeuvre into three phases: 1) the apprentice works (Der fliegende Hollander, Tannhauser, and Lohengrin), which feature the alienated romantic or epic hero not accepted by society; 2) Wagner’s central work (Der Ring des Nibelungen) where the concepts of romantic and epic heroism compete in a tragic universe; and 3) the third phase works (Tristan und Isolde, Die Meistersinger von Nurnberg, and Parsifal) where the concept of the messianic hero begins to emerge in Wagner’s mindset (probably based upon his own life experience). What is interesting in Wagner’s music dramas is that all three modes of heroism emerge only with male characters, but is often challenged by the female partner in the music drama.
The three modes of heroism identified by Williams are defined and discussed in chapter 1. The romantic hero, for example, has three qualities: a deep reverence for nature, a subjective viewpoint of the world, and a feeling rather than rational cognition towards the world. The epic hero, obviously, has the most admirable of human traits, immense strength and courage, and defines himself through action not thought. The messianic hero, finally, was based on Wagner’s readings of Thomas Carlyle in the 1870’s, and this hero has a tangible impact on everyday human life. He is “the Victorian self-made man writ huge,” as Williams states on p. 18.
In chapter 2, the author discusses the early nineteenth-century theatre and its limitations in which Wagner had to work with in his Die Feen and Rienzi. Moving into Wagner’s “isolated hero” early music-dramas in chapter 3, Williams provides subtitles for each of these that capture the drama succinctly: Flying Dutchman, vampire and wanderer; Tannhauser, sexual transgressor and artist; and Lohengrin, a glimpse of utopia. The Ring drama, examined in chapter 4, looks at the development of heroism and the concept of the hero in detail, both as romantic and epic figure, along with a short discussion of Brunnhilde. In chapter 5, Williams’ subtitles for Wagner’s music-dramas moving toward the messianic hero are: Tristan und Isolde, the endpoint of romanticism; Die Meistersinger von Nurnberg, artistic utopia; and Parsifal, utopia found.
In the final chapter, the author concludes with a discussion of how Wagner’s music-dramas have been represented on the modern stage. He mentions that he can only comment on those productions that he has seen. There are short sections focusing on specific productions that emphasize certain aspects of Wagner: his influence on fascism and anti-Semitism, dramas that focus on the concepts of greed and power, symbolic representations, and imagist and absurdist productions.
This book is a well-written, scholarly examination of Wagner’s music-dramas from the focal point of one aspect: the hero. The author weaves an elaborate yet understandable thread throughout the book, in support of his thesis of Wagner’s three types of heroism, and how each type appears and grows throughout each of Wagner’s works. A very interesting and thought-provoking essay on the whole of Wagner’s oeuvre focusing on one important topic and its growth and change throughout Wagner’s career and work.
Dr. Brad Eden
University of Nevada, Las Vegas