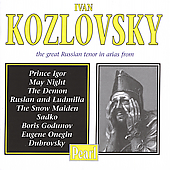 This new release from Pearl presents an anthology of Russian selections, primarily operatic, performed by tenor Ivan Kozlovsky (1900-1993). Kozlovsky was one of the giants of the Russian operatic stage during its glory days in the 1940s and 50s; he recorded extensively with Melodiya, both Russian and Western repertoire. Surprisingly, however, there has apparently never been a Kozlovsky Russian anthology available prior to this release (Myto Records released a collection of the singer’s Western operatic hits in 2000). It is gratifying to see it finally here.
The singer is featured in some of his signature roles: Berendei (Rimsky-Korsakov, Snow Maiden), Sinodal (Rubinstein, Demon), Levko (Rimsky-Korsakov, May Night), Vladimir Igorevich (Borodin, Prince Igor), Bayan (Glinka, Ruslan and Liudmila), Indian Guest (Rimsky-Korsakov, Sadko), Prince (Dargom&iumlautzhsky, Rusalka), Vladimir (Napravnik, Dubrovsky), and of course Lensky (Tchaikovsky, Eugene Onegin) and the Holy Fool (Mussorgsky, Boris Godunov). A rendition of Rachmaninov’s popular art song “Ne poi krasavitsa” (“Oh cease thy singing, maiden fair,” op. 4 no. 4), and the same composer’s rarely heard setting of Pimen’s monologue from Pushkin’s Boris Godunov are also included.
The recordings are beautifully remastered, and date from ca. 1947-1953, when the singer was at the height of his vocal power, his fame, and his great rivalry with his colleague at the Bolshoi, Sergei Lemeshev. Perhaps the most overwhelming first impression is Kozlovsky’s sound — beautifully lush, full, and rich in overtones, its endless lyrical flow rendered with astonishing flexibility and control, despite occasional tension in the upper register. His diction and phrasing are impeccable. Musical purists should not expect a meticulous approach to the score, however — tempo fluctuations, dramatic rests, and other examples of the old-style operatic “editorializing” abound. For traditional “white tenor” roles represented on Pearl’s recording, see primarily the two popular selections from Eugene Onegin, “I love you” and “Whither, whither,” as well as a cavatina from Rusalka and an aria from May Night.
Perhaps the most recognizable quality of Kozlovsky’s timbre is its slightly narrow, almost reed-like quality, with an ever-present vibrato. An object of unkind jokes late in his life, on these early recordings this tone color is more of an idiosyncrasy that makes for some truly unique interpretations. It is particularly noticeable in the “oriental” selections the singer performs — arias and art songs that evoke an image of exotic “Asian” Russia through gently undulating harmonies, rich ornamentation, and yes, the sound of the solo reeds — oboe, bassoon, and English horn. Look especially for the “Song of the Indian Guest” extolling the treasures of the mysterious East, the aria of young Vladimir Igorevich luxuriating in love with a Polovtsian beauty, the exotic romance of Prince Sinodal, and a passionate appeal to a Georgian maiden by Rachmaninov’s unnamed protagonist.
Another notable trait of Kozlovsky’s talent is its remarkable versatility in handling not only lyrical, but also character parts. This comes across particularly well in an anthology of excerpts from Russian operas in which, after all, a tenor is rarely the leading man. The singer creates memorable images of old sages — the ancient bard Bayan in Ruslan, and the wise sun-worshipper Tsar Berendei in the Snow Maiden (represented, unfortunately, by his second, less interesting cavatina). The Holy Fool in Boris Godunov is perhaps Kozlovsky’s most internationally acclaimed role; Pearl includes an excerpt from the St Basil Scene, complete with the choruses and an appearance by Alexander Pirogov as Boris. For those taken with this selection, the complete recording of the opera (with Nikolai Golovanov conducting) is available from Opera D’oro; Vera Stroeva’s 1954 outstanding film version with the same cast is currently out on DVD.
All in all, fans of Kozlovsky’s art and connoisseurs of traditional bel canto singing style will no doubt be delighted with the new recording. I would particularly encourage those who are only familiar with the singer’s late records, on which his previously incredible control is weakened, while the notorious vibrato is more pronounced, to hear the Pearl selections. A truly great tenor waits to be rediscovered.
Olga Haldey
University of Missouri at Columbia