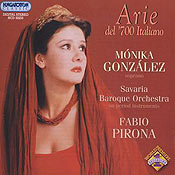 Featuring nine arias from various eighteenth-century operas and composers, this recording contains a wide variety of dramatic songs, three of which are the recitative and aria “Se cerca, se dice: “I’amico dov’e?” and “Ha keres, ha kerdez: a baratom hol van?” from the opera L’Olimpiade, set by three different composers. Accompanied on period instruments by the Savaria Baroque Orchestra, Mónika González does a magnificent job with each of the arias on this disc. She is a former winner of the International “Toti dal Monte” singing competition, and has studied by personal invitation with Dame Joan Sutherland and Richard Bonynge at their home in Montreaux.
The three settings of the same recitative and aria from L’Olimpiade are the focal point of this recording. The composers are Giovanni Battista Pergolesi (1710-1736), Giovanni Paisiello (1741-1816), and Niccolo Vito Piccinni (1728-1800). Pergolesi’s version, which premiered in Rome in 1733, was based on a libretto of Metastasio, which was considered a masterpiece, so much so that over fifty different composers set this libretto to music during the eighteenth century. While Pergolesi’s version was considered a failure at its premiere, it went on to be performed consistently throughout the eighteenth century, and inspired much admiration. It is now considered to be one of Pergolesi’s masterpieces, along with his La serva padrona.
Other composers and operas that appear on this disc include arias from Niccolo Jommelli’s (1714-1774) Armida abbandonata, Leonardo Leo’s (1694-1744) Catone in Utica, Pergolesi’s Adriano in Siria, Antonio Sacchini’s (1730-1786) L’eroe cinese, Baldassare Galuppi’s (1706-1785/9) Antigona, and an aria from a missing opera by Tommaso Traetta (1727-1779). Overall, this is an excellent recording of eighteenth-century opera arias, with a nice comparison/contrast of three different settings of the same aria to music.
Dr. Brad Eden
University of Nevada, Las Vegas