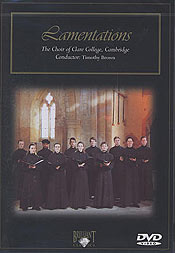 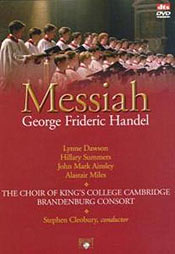 The Brilliant Classics label has been releasing budget priced recordings on CD for some time now, many to high praise. Complete symphony cycles (for example, of Shostakovich and Bruckner) have been favorably compared in some publications to those from major labels featuring star conductors and top orchestras.
Now the company appears ready to venture into the growing DVD market, and among the first releases are two DVDs featuring British choirs. The Lamentations disc features choral masterpieces from Palestrina’s Stabat Mater to George Kirbye’s Vox in Rama. The program reveals itself to be two separate groups of performances; the first filmed at Jesus College Chapel and the second, which gives its title to the entire program, filmed at All Saint’s Church. Both come from 1996.
The Choir of Clare College is composed of fresh young souls with pure, sweet voices, and anyone with an appreciation for this music should find the performances enjoyable. Tallis, Byrd, Gesualdo — many of the great composers of choral music receive clean, disciplined performances under Timothy Brown’s leadership.
Exactly what benefit the visual element brings to that enjoyment remains a question. The camerawork here is rudimentary. For your reviewer, a claustrophobic feeling grew, as the camera remains resolutely within the chapel with the choir, panning over the choir members’ faces and then returning to a position behind Brown for group shots. Occasionally, the walls are panned. Devotees of British church drywall techniques may find that fascinating. Others may find something to focus on in the hair of one male choir member in the second section, who seems to be wearing a beret but in close up is revealed to have a mushroom-shaped coiffure of tight curls.
The review copy came with a booklet offering texts in English only, but very little other information. There are no subtitles.
Nor are there any on the Messiah disc, and here the review copy came without any booklet whatsoever. The performance was recorded in the Netherlands in 1991, and from the look of things, was quite a formal occasion: full dress for the men and tasteful gowns for the women, and an audience, albeit one that never breaks into applause, even at the end.
Cleobury leads the Brandenburg Consort in a historically-informed performance, and though many — well, at least your reviewer — may wish to run for the classic Beecham set to be reminded of the passion and excitement this music can evoke, others will surely find the intimacy and naturalness very appealing.
Every soloist offers fine singing, although the alto Hillary Summers may be an acquired taste, as she has a rather plumy sound that becomes monochromatic in extended singing. He was despised especially became rather tiresome. Dawson, Ainsley, and Miles, however, sing with great control and much beauty.
Once again, the visuals don’t add much if anything to the performance’s success. To break up the monotony, the director has inserted from time to time some etches of scenes corresponding to the story. Whether these enlighten the viewer or distract will be an individual response.
Presumably these DVDs will be offered at the same sort of budget price that Brilliant Classics offers for its CDs. If so, those with a special love for British choirs may find these two discs worth the expenditure. For others, surely the best performances on CD would be preferable.
Chris Mullins
Harbor Teacher Preparation Academy