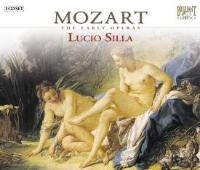 In December 1772, Mozart completed Lucio Silla on commission for Milan’s Teatro Regio Ducale — his second opera for Milan, after Mitridate. This opera seria is placed in ancient Rome, where Lucio Silla is the absolute dictator. Silla wishes to marry Giunia, the wife of the Roman senator Cecilio, whom he had exiled. After an attempt to assassinate Silla is thwarted, Cecilio is condemned to die. Silla eventually renounces the dictatorship, pardons Cecilio, frees all political prisoners, and gives freedom to the Roman people.
This is a recording of a live performance given in 1985 at the Theatre Royal de la Monnaie (aka DeMunt) in Brussels. This is yet another reissue of the recording, now on the Brilliant Classics label. This 3-disc set includes a booklet that provides the opera’s synopsis, the contents of each disc, and the libretto in Italian. There is no biographical information provided on the soloists, and there is no information provided on the orchestra and chorus. This is not a historically informed performance in that the sound quality is more Romantic than Classical in nature. It is also a live recording, which means that the listener can hear all of the audience’s movements and sounds throughout.
While the performance, as recorded live, is of a good quality for its time, Teldec’s recording with Peter Schreier, Edita Gruberova, Cecilia Bartoli, Dawn Upshaw, Yvonne Kenny, and Nikolaus Harnoncourt conducting the Concentus Musicus Wien, is preferable.
Dr. Brad Eden
University of Nevada, Las Vegas