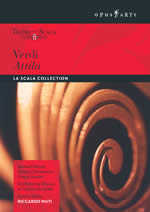 This DVD release, taken from an RAI telecast, documents a 1991 La Scala performance of Verdi’s 1846 opera, based on the life of Attila the Hun. I’ve always felt that early Verdi is one of Riccardo Muti’s greatest strengths. When Muti was Music Director of the Philadelphia Orchestra, I was privileged to see their concert performances of Nabucco and Macbeth. Both featured breathtaking execution, intensity, and momentum.
Those same qualities may be found in this La Scala Attila. What a pleasure it is to hear an early Verdi score treated with the same respect as his later masterpieces. Verdi’s incisive rhythms and dynamic contrasts — so necessary for maintaining the tension of these early, vibrant works — are given their full due. Muti also elicits a beautiful, singing tone from the La Scala Orchestra, and conducts with a flexibility that belies the “metronome” criticism often leveled at his work. Listen, for example, to the way Muti and tenor Kaludi Kaludov sculpt the grand, ascending phrases of Foresto’s Prologue aria. That kind of gratifying collaborative work is evident throughout this performance.
Leading the cast is the superb American bass, Samuel Ramey, in the prime of his career. Atilla is a role that fit Ramey’s powerful and gleaming, high bass like a glove. Here, he revels in the part, both vocally and histrionically. Whenever Ramey is on stage, he commands the center of attention, as well he should. A fine document of a great singer in one of his signature roles.
The rest of the singers are a bit more uneven, but each still offers many positive attributes. Cheryl Studer copes well with the fiendish dramatic coloratura of Odabella’s music in the Prologue, although the soprano is much happier in the upper reaches of her voice than in the lower, which tends to lose support and focus. The remainder of the opera features more conventional soprano writing, and here, Studer acquits herself admirably. She also brings considerable stage presence to the part.
Giorgio Zancanaro was one of the few singers of his generation who possessed the style, incisive diction, vibrant tone, and free upper register so essential for the great Verdi baritone roles. I wish Zancanaro didn’t so frequently resort to aspirates instead of maintaining a true legato, but overall, I can’t imagine anyone from the past few decades performing the role of Ezio better. Both the Prologue duet with Attila and Ezio’s Act II scene are among the highlights of this performance.
I previously mentioned tenor Kaludi Kaludov’s fine singing in the Prologue. Throughout this performance, the tenor gives a well-sung and sensitive account of Foresto. I don’t think the consistently bright timbre of his voice is ideal for the role (Carlo Bergonzi once said that a Verdi tenor’s voice should have “the color of blood”). But Kuladov uses his resources well, and certainly never a liability.
The video and sound quality of this DVD release are both first-rate. The DVD menu offers the option of English subtitles. The booklet contains a synopsis and Italian libretto.
Recommended particularly for the work of Muti and Ramey. Admirers of the other performers, and of this opera, may purchase this DVD with confidence as well.
Kenneth Meltzer