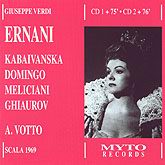 “Few tenors today have his ringing top” and “his ringing, clear top” are not exactly qualities one associates with baritenor Placido Domingo, as he has been calling himself for the last ten years. Still, those were the exact words used by critic Peter Hoffer in his reports for Opera Magazine and Opera News on the opening of La Scala for the season 1969-1970. In all honesty, a ringing top à la Corelli is not exactly what one hears on this recording. But there is no hint of a pushed up baritone either. This is 28-year old fresh voiced Domingo with all the beauty and youthful freshness of the middle voice and quite an acceptable top always taking the higher option (A or B-flat) at the end of a solo or a duet. Mr. Domingo has been so long among us that one somewhat has forgotten how meltingly beautiful the young tenor sang, relying on his outstanding vocal gifts.
Original phrasing or deep musical insights (which are barely to be found in the score) never became Domingo’s forte though at the time we still had hopes. Nevertheless this is fine singing in difficult circumstances. The year before La Scala had a difficult opening with extreme left demonstrators not shy to use violence. The opening of 1969-1970 was one with a lot of police in and around the house, no flowers in the theatre and no jewelry for the ladies. Moreover this was Domingo’s Scala and role début. Inevitably, he was nervous and this shows in his aria where he is at loggerheads with Votto’s tempi but he soon relaxes and gives us his golden tone from beginning to end.
His partner is Raina Kabaivanska, by that time a seasoned performer at La Scala who had made her début there 9 years earlier in Beatrice di Tenda. She often has the better of him; somewhat outsinging him during duets or trios. I heard both of them one year later during an impressive Manon Lescaut and he surely didn’t have the smaller voice. So this must be a question of balance and I’ve got the feeling that Kabaivanska with her routine knew the better spots on La Scala’s scene from where to hurl her voice into the house and the mikes. Her voice too is pretty, youthful and she always knew how to respect a Verdian line.
This is one of the few recordings with baritone Carlo Meliciani. Piero Cappuccilli had succumbed to flu and he was replaced by this La Scala stalwart (ten years older than Domingo) who often sang in second casts or modern operas. The sound is not to be despised however. Somewhat hesitatingly during the first act, he clearly comes into his own from “Vieni meco” on and gives a magnificent and stylish “O dei verd’anni miei”. The voice resembles Benvenuto Franci’s rich sound with quite the same vibrato (which I personally like) though without the elder baritone’s strength on top (no ending on G). The recording once more teaches us a lesson on the difference between real and recorded sound: Meliciano’s decibels are impressive and yet the same Opera News critic writes “a voice lacking in weight for this theatre”, an opinion I can only concur with as he didn’t make an unforgettable impression on me when I heard him two years later at the Verona arena.
One who has the voice in both the theatre and the studio is Nicolai Ghiaurov as Silva using his fine instrument in an impressive way showing off an exemplary legato. Conductor Antonino Votto doesn’t let the music go slack and lets conductor purism not get the better of his judgment; therefore we get interpolated high notes and Silva’s cabaletta “Infin che un brando vindice”, rousingly sung by the bass even though it is suspected that Verdi was not the composer. Muti would never have allowed it and indeed had it cut out in his 1982 recording. In the official EMI-set, Domingo and especially Ghiaurov have lost some of the sheen on their voices and therefore admirers of both singers will do well to purchase this recording under review.
Jan Neckers