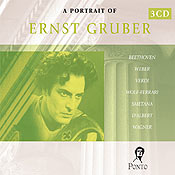 Up to now Ernst Gruber was only a name to me. During the fifties and sixties his career was centered in the houses of the defunct German Democratic Republic; first Dresden and Leipzig and later on at the Deutsche Staatsoper in East-Berlin. Usually he rated one or two entries each year in Opera Magazine; mostly just barely mentioning his name as even in those times reviewers concentrated almost exclusively on the antics of director Felsenstein and some of his copycats. So I thought of him as one of those somewhat to be avoided German tenors like Hans Günther Nocker who, while acting their heads off, sang in that barking way that got them epitaphs like “intelligent, thought-provoking” while words like “beauty of tone” were anathema to them and the critics. Mostly they remained behind the Iron Curtain, unless at the last moment they had to run to the rescue in Western Europe or the US when Windgassen or Thomas fell unexpectedly ill. They were always happy to comply as they mostly got 20% of the fee, immediately handing over the remaining 80% to the Stasi officer accompanying and controlling them, who would always remind them of the fate of their families who had to stay home as hostages.
Well, I was wrong in more than one way. Ernst Gruber was an authentic Viennese who made his début aged 29 in Graz in 1947, never gave up his nationality and his Viennese dialect. He lived in Berlin (where there was no wall till 1961) and could easily cross the frontier. So he from time to time he popped up in the West as with his 1967 performance as Tristan in Philadelphia; now even available on CD (Ponto PO 1026). He died in 1979 of the complications of routine surgery.
And I was wrong on the quality of the voice too. It is a big voice as can be clearly heard from the several ensembles on these recordings. The amazing thing is the ringing free top which has no problems at all with high C in “Lodern zum Himmel (= Di quella pira)”. The color is somewhat dark, not very refined, a lot of metal though no sweetness or real beauty in it. He belongs, too, to the old German school where each word has to be understood so that from time to time beauty of tone surrenders to spitting out the right consonants. He reminds me of his contemporary, Ernst Kozub, who made a bigger career. Still, and I know readers must by now be dead tired of this cliché, he would have made quite a career nowadays. Even in those tenorricher times, it is strange he didn’t make more of an impression. I looked up his name in my Chronik der Wiener Staatsoper and to my surprise he never sang in the main house in his city of birth while far lesser tenors as Janko, Lustig, Pöltzer, Söderström were employed in the roles of his repertory.
The recordings, all in good sound as they are derived from radio sources, give us a full idea of the voice’s evolution between 1955 and 1965 and it is a fascinating one. In the earlier recordings like Trovatore the voice is very forward, sometimes sounding a little throaty with very open sounds which sometimes grate a bit. Gradually the voice becomes rounder, more beautiful until in the middle register it sometimes has an uncanny resemblance to the Vickers sound in the same repertoire with the difference that Gruber’s high notes above the staff are much stronger and fuller. As can be expected, he is at his best in his German roles, especially where a lot of declamatory music is in attendance like d’Albert’s Tiefland. Kollo, Schock and Hoppe in their official recordings cannot compete with his big incisive sound. In more lyrical roles like Lohengrin and Walther he is less successful though he succeeds in singing some fine pianissimos but the lack of pure beauty in those well known arias is a handicap.
One of the joys of this recording consists in finely having a testimony of other female singers like Elisabeth Rose or Maria Croonen; they too only names up to now. Not that they are singers of genius but both are honest pleasure giving artists though Rose is a shade too lightweight in Tannhäuser on the third disc. We get the whole second act and I fail to see why this is included as Tannhäuser’s role is somewhat limited and Rudolf Jedlicka’s Wolfram is not so unforgettable as to be preserved for eternity. A two-disc set would have given us a fully satisfying portrait of the tenor and would have been cheaper.
Jan Neckers