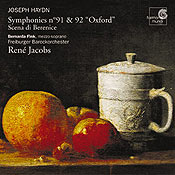 This wonderful recording features two Haydn symphonies composed in the year 1789, which frame the short dramatic scena Berenice, premiered in London in 1795. The autograph scores of the two symphonies were dedicated and given to Claude-Francois-Marie Rigoley, Comte d’Ogny, cofounder and patron of the “Concert de la Loge Olympique,” an association for which Haydn had already written the so-called “Paris” symphonies in 1785/86. A Swabian prince, Kraft Ernst von Oettingen-Wallerstein, who was an ardent admirer of Haydn works and wished to acquire autograph manuscripts of his symphonies himself, had asked Haydn to produce some symphonies for his personal collection in 1788 as well. Haydn, in a somewhat underhanded manner, sent the Swabian prince autographed copies of the orchestral parts for these two symphonies, so that the autograph scores are dedicated to a French count, and the orchestral parts are dedicated to a German prince. Talk about killing two birds with one stone, or rather fulfilling two commissions with one ingenious solution! In any case, the Freiburger Barockorchester’s performance of these two symphonies is magnificent, with correct orchestral size and authentic instruments.
At the culmination of the London concert season of 1795, Haydn conducted perhaps his most significant vocal work, the dramatic scena “Berenice, che fai?” It was written specifically for the Italian soprano Brigida Giorgi Banti, who made her grand entrance at the end of the concert performing this work. It is based on the third act from Pietro Metastasio’s Antigono. Beethoven would use Haydn’s setting of this text as his model in 1796 for his scena “Ah! perfido,” op. 65. The drama shows Berenice lamenting the death of her beloved Demetrio. She sees his ghost as it leaves for the underworld, and begs him in this arioso not to leave without her. After a short recitative, the scena ends with a dramatic aria in which Berenice wishes for her own death. The unconventional harmonic design of the scena mirrors Berenice’s state of mind throughout the short drama. The benefit concert where this was performed netted Haydn high earnings, although he commented that Banti’s performance was less than perfect. Bernarda Fink, the soloist on this recording, does a wonderful job of portraying Berenice’s loss of sanity as she laments her dead lover. I highly recommend this recording.
Dr. Brad Eden
University of Nevada, Las Vegas