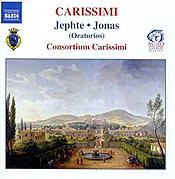 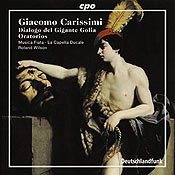 Two recent CDs of Carissimi oratorios provide the listener the opportunity to compare very different “takes” on the composer’s remarkable works, which exemplify the sophisticated and exclusive style cultivated by the cardinalate nobility in mid-seventeenth-century Rome. Carissimi’s oratorios survive in manuscript only, and with relatively sparse indications concerning instrumentation; it has long been a challenge for contemporary performers to balance the need for dramatic clarity with the desirability of sonic variety, and the two groups featured on these CDs take different approaches to that challenge, each with fruitful results.
The ensemble “Consortium Carissimi” was founded in Rome in the late 1990s to bring more attention to the works of the prolific composer (whose fame in a wide variety of genres was extraordinary in the 1600s, but who is now known primarily for his Latin oratorios). This is the first recording by the ensemble to tackle sacred dramatic works in the genre, and while it is understandable that they chose to measure their Jepthe (the most famous of Carissimi’s oratorios, a jewel of compact drama) against the many other recorded versions of the work, their goal of greater exposure for Carissimi’s music might have benefited from the choice of less well-worn works (the other oratorio in the recording, Jonas, has also been recorded repeatedly since at least the 1970s). The ensemble’s approach is minimalistic, with a clear focus on the dramatic delivery of text; this is done very effectively, and the clarity and subtlety of enunciation is wonderful, especially on the part of Marco Scavazza, the baritone who plays the title role in Jepthe. The lament of the daughter of the king who must die without children is certainly the most poignant moment in the work, and soprano Nadia Caristi has an extraordinary delivery; likewise in Jonas, the monologues are extremely powerful.
The duets and ensemble sections that punctuate the works are less interestingly conveyed. Melody-instrument reinforcement is relatively sparse (two violins), and even with a reasonably well-stocked continuo group (two plucked-string and two bass-line string in addition to the harpsichord/organ player) the accompaniment creates a relatively uniform effect. There are few moments of dramatic sonic contrast: it seems that the ensemble is relying on the power of the solo voices, sometimes dangerously leaning toward a monotonous effect.
The male voices of the ensemble are the strongest aspect of this recording, both individually and in their sonic blend. This makes the trio for tenor, baritone, and bass that complements the two oratorios — “Dai piu riposti abissi”, an Italian cantata — the most remarkable and worthwhile piece on the CD. It alone is worth the purchase price, and the clarity of the delivery in the two oratorios is a welcome change over some earlier recordings of the works that provided more sound and fury than dramatic effect. One hopes that the Consortium Carissimi will continue to expand our awareness of Carissimi’s lesser-known works, their strength being perhaps the smaller-scale compositions rather than the oratorios.
More musically satisfying overall to this reviewer is the other disc under consideration, a recording of four recently-rediscovered Carissimi oratorios. Perhaps the unfamiliarity of the works (thought to be lost, but recovered in a Czech archive) adds to the pleasure of discovery; while Jepthe is a wonderful work, it is more exciting to have the opportunity to experience another facet of Carissimi’s creativity. Certainly La Capella Ducale and Musica Fiata Köln, long-standing effective interpreters of seventeenth-century concerted music, are on top of their game. The two sopranos, seasoned Constanze Backes and the young Monika Mauch, create extraordinary characterizations of old-testament heroines (and heros), and veteran bass Harry van der Kamp at his sonorous best, especially in his turn as the cocky giant Goliath. The presence of brass resources (cornetti and trombones, long a strong suit for Musica Fiata) in the soundscape gives Roland Wilson a wider palette than that available to Consortium Carissimi, and that palette is deployed to great effect, creating a wonderfully varied interplay between melody and continuo resources (despite actually having a more compact continuo group than the Italian ensemble). Delivery is perhaps a little less crisp than in the other disc under consideration, but the dramatic power of the musical gestures is unquestionable, and Wilson and his ensembles once again demonstrate their command of the sacred musical idiom of the Italian seventeenth century.
While the Consortium Carissimi CD is interesting as a comparison-point to many other recordings of Jepthe and Jonas, and most worthwhile for its more unusual Italian cantata, the Musica Fiata CD is a must-have for its expressive variety (not to mention the delight of discovering Mauch’s powerful voice); the fact that it provides what appear to be the first recordings of four wonderful Carissimi works is icing on the cake. One quibble with the format: while Naxos (as they often do) have created many (almost too many?) separate tracks, allowing the listener to quickly locate a particular excerpt, cpo frustratingly provides a single track for each work — which, in the case of Regina Hester and Diluvium Universale, makes for 25-minute tracks — making it difficult for the listener to find favorite passages. But this is a small logistical matter, and a negligible road-bump in the enjoyment of this fabulous CD.
Andrew Dell’Antonio
The University of Texas at Austin