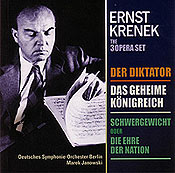 Ernst Krenek is remembered primarily for one work, his jazz opera Jonny spielt auf, which irritated the cultural conservatives in Germany and Austria in the years between the wars and helped ensure his exile to America during the Nazi era. If an opera strewn with jazzy tunes and a romantic black hero wasn’t enough to tick off the right wing, he turned to serialism for his magnum opus, the anti-Nazi, pro-Austrian Karl V (Charles V, whom you’ll remember from Verdi’s Don Carlo).
Krenek’s first major operatic success in the early twenties, Der Sprung über den Schatten (The Leap over the Shadow), set the tone for many Zeitoper in its use of jazz elements (supposedly it was the first opera to use jazz), satire and parody, psychoanalysis, and a revolution in a minor Central European principality. He followed it with a turn to mythology in an opera on the Orpheus and Eurydice myth. These two works prefigure almost all Krenek’s later operatic works in both their plot elements and musical techniques, even those written in America when he turned to complex serial techniques and even wrote an opera for television (he lived until 1991).
The three works reviewed here saw a joint premiere in Wiesbaden in 1928, where Krenek was employed at the theater. The Dictator tells the story of a dictator, obviously based on Mussolini, who is staying at a Swiss spa with his rightfully jealous wife. Also staying there is one of his officers, who has been blinded in one of the dictator’s many pointless wars, and his wife; together they are plotting to assassinate him. When the wife goes to shoot him in his office, however, she quickly succumbs to his charms. They are surprised by the dictator’s wife, who grabs the gun and shoots–the officer’s wife, who throws herself in front of the dictator to save him. Remember that in Jonny, the heroine falls for a womanizer too. One wonders what Krenek’s romantic life was like.
The second piece, the shortest of the three, is more like Jonny in its use of jazz and broad parody and satire. The heavy-weight boxer Oxenschwanz (Oxtail, though Schwanz has another meaning that we can’t go into on a G-rated site) is in training at his gym and catches his wife having an affair with her dancing instructor. He locks her up and sits down to a large breakfast at which he is interviewed by a newspaper reporter who takes his every grunt as a profound comment. Things don’t change much, do they? An infatuated, nerdy young female student arrives, but she has to hide when her father, the professor, arrives as well. Through a broadly silly chain of events, she masquerades as a boxing dummy and gets pummeled by Oxtail, but loves it. Krenek’s romantic life must have been interesting. The dancing instructor returns in disguise and hooks the boxer up to an electrified rowing machine that he can’t stop, and escapes with Oxtail’s wife. As the opera ends, a government official arrives to tell the boxer that the government is sending him to the Olympic Games as the “glory of the nation.”
Krenek turns to the Schreker-Zemlinsky genre of ponderous operatic fairy tales in the last piece, The Secret Kingdom. Revolution has broken out in a Central European kingdom where the king is having an identity crisis. His fool tells him a riddle: “What is round and shiny and is on a head and contains a whole world?” The queen arrives, disgusted with her husband’s behavior and ready to sell him out for the hunky rebel prisoner. The king, in despair, gives up his crown, but he gives it to his fool instead of the greedy queen, who with her ladies proceed to ply the fool with liquor and win the crown from him in a card game. However, the rebel wants just the crown, not the queen that goes with it, and chases her into an enchanted forest. As he is about to ravish her (he’s changed his mind, seeing her naked) and seize the crown, she turns into a tree. Her husband wanders in, still in a funk. As he is about to string himself up from a limb on the queen-tree, she sings to him and comforts him. The king realizes that the answer to the fool’s riddle is the eye of an animal reflecting nature. Krenek may have been hot at romance, but he wasn’t so hot with riddles. The fool has the last word, as all fools do.
Krenek’s music is pleasant enough in all three operas though not distinguished enough to warrant these pieces becoming regular repertoire pieces, by any means. The Dictator and Heavy-Weight would make fun pieces for college opera theaters, if the politically incorrect portrayal of women could be overlooked. The performances on this recording are all second-tier European opera house quality, though none of them are objectionable and all fill the needs of the music admirably. Any singers willing to learn works such as these that they probably won’t ever get to perform again deserve listeners’ thanks. Janowski conducts in his usual expert style, catching the jazzy and satirical tone of these Zeitoper. Krenek has other interesting unrecorded operas from his American career that we can hope Janowski turns his attention to next.
David Anderson