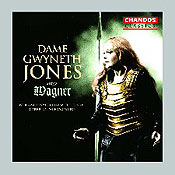 This CD is a digital remastering of an original 1991 recording of Gwyneth Jones in selections from Tannhäuser, Lohengrin, Tristan und Isolde and Götterdämmerung. Jones was (and is) one of the great interpreters of Wagner, and the release of this CD is a welcome event, not only to her many friends, but all of us who are fascinated by the interpretation of Wagner’s works. The recording is clearly meant to serve as a recorded monument to her artistry. Unfortunately, the CD is marred by many problems that make it less than satisfactory.
As we might expect, the sound engineers for this CD elected to foreground Jones’s voice. But they also chose to “iron out” the dynamics, so that the fortes are attenuated and the pianos are amplified. Forte and piano, we might say, are no longer indicators of volume, but rather of color. This has the effect of diminishing the differences between Jones’s interpretations of the individual heroines: Elsa and Isolde sound quite similar. Only in a few passages, such as the beginning of Elizabeth’s prayer or the end of Brünnhilde’s immolation scene, do we get a clear sense of Jones’s distinctive approach to these characters.
Sound engineers might also be responsible for the quality of the orchestral sound, which is generally cold, thin, and overly bright. Part of this, however, must be laid at the door of the conductor. Paternostro goes a long way toward making Wagner’s music sound banal. This reviewer found Paternostro’s interpretation of the Tristan prelude (paired, as we might expect, with the Liebestod) to be the low point of the entire CD. His rather metronomic approach to the score deprives the performance of the sense of large-scale development that is so essential in Wagner. The tempi are rather quick, but somehow the performances seem too long.
One of the most distinctive things about Dame Gwyneth’s voice is her approach to vibrato. She often begins a long note without any vibrato at all, adding it quickly in what we might think of as an idiomatic version of the classic mezza di voce. This can be a thrilling effect, but too often, the initial attack is under pitch. Jones’s approach sometimes sounds mannered, particularly in the upper part of her range. In other sections, however, the effect is absolutely magical. The opening and the final passages of the Liebestod, for instance, are ravishing. Jones sings the final note in a bell-like pianissimo, without any trace of vibrato at all, producing what can only be called a sonic emblem of transfiguration.
The total time of this CD is only a bit over 55 minutes, and a few of the Wagnerian soprano chestnuts are missing. I would have particularly enjoyed hearing Dame Gwyneth sing Senta’s ballad from Der fliegende Holländer and “Der Männer Sippe” from Die Walküre (they are absent from this CD). Despite its inadequacies, this recording is an important document of what is surely one of the great Wagnerian voices of the late twentieth century.
Dr. Stephen Meyer
Syracuse University