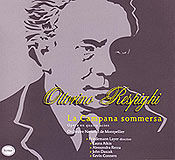 Ottorino Respighi (1879-1936) is known best in the United States for his tone poems, including the Pines of Rome, the Fountains of Rome, and Roman Festivals, and, perhaps for some of his suites of early music, like the sets of Ancient Airs and Dances that reflect his detailed orchestrations. During his lifetime, however, his operas were known, and they include Re Enzo (1905); Semirama (1910); Belfagor (1921-22); La bella dormente nel bosco (1916-21); La campana sommersa (The Sunken Bell) (1923-27); Maria Egiziaca (1929-31); La Fiamma (1931-33); Lucrezia (1935). It is unfortunate that recordings of these works are somewhat rare, but that is quickly remedied by the recent issue of La campana sommersa on the Accord label.
This opera is a mature work of Respighi, and it contains the unmistakable orchestral writing that is familiar in his instrumental works. From the outset, the style is clear, with gestures that can only be attributed to Respighi. When the voices enter, the instrumental element gives way to the voices, which are supported by the full orchestra and never obscured. The vocal lines are nonetheless idiomatic and reflect the Verismo style of the period, echoing, perhaps, some of the motivically oriented style found in Puccini’s Turandot. La campana sommersa is also paced well, and the scenes succeed fluidly, with each act following the other satisfactorily. There is never a perfunctory moment or stilted passage. Rather, the musical logic takes the listener through the work, with the musical narrative supporting the libretto seamlessly.
As to the story, La campana sommersa refers to the sunken bell at the crux of the plot that hinges upon the intersection of worlds of humans and fairies. The bell-maker Enrico’s magnificent creation is at a certain point submerged in a lake, and this element forces the dénouement of the work. In facing the decision to choose between his wife, Magda and the elf Rautendelein, Enrico makes a decision that changes his life and the world around them. The libretto is a fable that resembles, in some ways, Dvorak’s Russalka, where the power of love must overcome the differences that separate entire worlds of being. Either story may be regarded as a fable, and each also involves fairy-tale elements that create surrealistic settings.
The similarity between those two operas differs, though, since Respighi used some of the conventions of Verismo to set the text. The convention of set-pieces is absent from this score, as is the use of recitative to convey dialogue. As occurs in many traditional Verismo operas, the musical line is continuous, yet never completely declarmatory in its presentation of the sung text. Likewise, the orchestra does not merely accompany the work, but it helps in setting various scenes, as occurs at the beginning of the opera, which is supposed to occur in a meadow. In the next scene, when the bell-maker Enrico is lost, the orchestral passage before he sings “O buona gente” helps to depict the situation, with its repeated, unresolved motives preceding the character’s declaration of being lost.
Yet the aesthetic idiom of Verismo, with its ideal of presenting true-to-life drama in contrast to the unrealistic idiom that became the domain of opera in the late nineteenth century, exists at odds with the Maeterlinck-like story of La campana sommersa. If nothing else, Respighi’s use of some conventions of Verismo opera helps to convey a contemporary sensibility to the work. In doing so, Respighi is looking backward at a “Once upon a time,” but suggests a contemporary setting, as Puccini did in this opera Le Villy, another work that involves the tragic consequences when humans encounter the world of the fairies.
As to the music itself, no distinctive pieces emerge from the score as particularly noteworthy in the sense of some of Puccini’s more famous numbers, like “Vissi d’arte” or “Nessum dorma.” Those kinds of pieces can create points of reference within an opera yet they are not entirely necessary With La campana somersa, no such popular numbers survive. Yet it is worth hearing some of the sustained pieces like the second-act scene of the elfin character Rautendelein “Tu me piaci,” in which she reveals something about her nature to human Enrico, whom she loves. Like the music with Enrico mentioned above (“O buona gente”), Rautendelein’s scene is one of the points in the libretto that is structurally more a soliloquy than dialogue, and here Respighi uses the opportunity to great effect, since he creates a sympathetic otherworldly sense that makes it possible to understand Enrico’s attraction for the elf.
Other aspects of the score deserve attention, not the least of which is the contrast that exists between the accepted paradigm of the modern world and the attraction for what may be termed the irrational, the fanciful, the old pagan beliefs in elves and other supernatural beings. This may be interpreted by some in Jungian terms, but it also provides a talented composer like Respighi with the opportunity to create a work that may be interpreted at different levels. The score is as convincing as any of Puccini’s, and it reflects the kind of rich score that Respighi’s contemporary Erich Wolfgang Korngold created in a work like Die Wunder der Heliane.
While it is unlikely that La campana sommersa may ever displace some of the existing pieces of Verismo literature, this recording makes accessible another work from the period and an excellent example of Respighi’s craft as an opera composer. The live performance is vivid and intense, and the singers handle their roles convincingly. Laura Aikin is notable as Rautendelein, a role which involves some demanding technical work. She sings the role with ease and deft musicality. In conducting Respighi’s sometimes full orchestrations, Friedemann Layer contributes balance and paces the work well. In all, La campana sommersa is a twentieth-century opera that deserves not only to be heard, but, as indicated by this fine performance, enjoyed.
James L. Zychowicz
Madison, Wisconsin