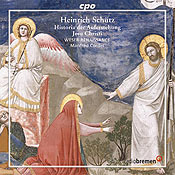 In the seventeenth century Germany did not move quickly to embrace the new oratorio genre, despite its mainstream cultivation in Italy. Arguably, in fact, the Italianism of the genre may have made it suspect in some Protestant circles, and contributed to its slow cultivation. However, German interest in musical settings of sacred narrative is clear, given the examples of historiae composed by Heinrich Schütz and his contemporaries. These historiae present Biblical stories without modern poetic interpolations, and Schütz’s “Resurrection History” of 1623 is one of the most compelling. Music historians have rightly seen in the historia an antecedent of the German oratorio, but in its own right — and especially in Schütz’s compositions — it is a rich form, liturgically functional and compositionally sophisticated, that need not be harnessed to the more prominent oratorio to warrant our attention. With this recent recording of the “Resurrection History,” Manfred Cordes and Weser-Renaissance Bremen add a fifth installment to their series of Schütz recordings for Classic Production Osnabrück and with it a welcome new performance of this significant work.
The “Resurrection History” is based on a conflation of Gospel accounts of the events following Jesus’ resurrection: the visit to the tomb by the three Marys, Jesus’ appearance on the road to Emmaus, Jesus’ eating with the disciples, and so forth. Schütz sets the text for a narrative evangelist accompanied by a consort of viols, with the evangelist singing traditional chant formulas. The music for characters with dialogue is, in the main, duet texture, accompanied by basso continuo. Both the narrative chant style and the polyphonic music for individual characters may imbue the whole with a liturgical aura and keep theatricalism at bay. However, Schütz, in his performance directions shows a degree of flexibility that may nurture dramatic effect, especially in allowing the duets to have one line played, rather than sung, or even having the second line omitted altogether.
The Weser-Renaissance performance is an exuberant and robust one, attuned to the dramatic potential of the work. The evangelist, Hans-Jörg Mammel, varies tempo and dynamic levels to good expressive effect, and the accompanying viols, with improvised figuration, significantly animate the narrative flow. Moreover, characters are made distinctive with different continuo ensembles — Mary Magdalene sings to the accompaniment of the harp alone; Cleophas, to organ and harp, etc. — and this operatic practice, explicit in works like Monteverdi’s Orfeo, serves the dramatic sense well.
Infelicities are few. Balance problems emerge here and there: sometimes the evangelist seems loud relative to other parts, and in some instances the organ seems unexpectedly loud relative to the singers. But these do not detract from the overall impression of a strong and vital performance, polished in detail and moving in effect.
The recording also features several smaller-scaled Easter works, including the Dialogue, “Weib, was weinest du?” A setting of Mary Magdalene’s recognition of the risen Jesus, it is notable in its expressive intensity and in its retention of motives and harmonic gestures from the earlier “Resurrection History.” Clearly Schütz was happy to revisit this material, and given this recording, the listener will surely join him in that sentiment.
Dr. Steven Plank
Oberlin College