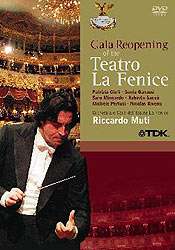 The liner notes dryly state that “This was a stringent programme for an opening-concert audience used to lighter fare at such events.” In the past this would surely have been true but together with “Das Regietheater,” there is now a firm tradition in European houses that the reason for their very existence is art, and preferably in its purest form. Audiences are not there to amuse themselves or even to enjoy the music but to ponder on whatever life’s questions may be at that exact moment. They are mightily helped in their endeavours by conductor Riccardo Muti who cannot be caught with a single smile on his face during more than an hour of music making. Therefore a house where five operas by Giuseppe Verdi were premièred cannot be expected to open with such banalaties as Ernani, Attila, Rigoletto, La Traviata or Simon Boccanegra. Even worse would have been a concert with some prominent singers performing well-known arias and duets from these operas. The danger of enjoyment would have been too great. A conductor who reopened La Scala one year later with that immortal masterpiece L’Europa riconosciuta can be expected to make more original choices. Muti preferred lesser known music by maestros who had some ties with the city itself, even with the opera house.
Muti starts with the Beethoven overture “Die Weihe des Hauses”, op. 124 (The Consecration of the House) and he does it with vigour and ‘schwung’, actually making the music better than it probably is in the hands of a lesser maestro. Then it’s time for Stravinsky’s 20-minute Symphonie de psaumes with some excellent chorus singing. (The composer is buried on a Venetian island and his The Rake’s Progress premièred at La Fenice.) A Venetian born composer should have his place in such a concert though not Antonio Vivaldi; that would have been too easy. The honour goes to Antonio Caldara with a not very interesting Te Deum. This has the advantage of introducing 8 soloists; most of them having only a few sentences to sing during this 10-minute piece. Even then Ciofi and Pertusi succeed in making some beautiful sounds while tenor Sacca and especially bass Rivenq with worn or wobbly voices make one wonder why they were chosen.
The concert ends with two fairly unknown pieces by Wagner (who died in Venice). The Kaisermarch is an interesting one. The former revolutionary clearly had an eye on the powers that could be. His protector, King Ludwig II of Bavaria, was in financial difficulties. Bavaria and some other South German states had been allies of Austria in their brief war with Prussia in 1866. Austria which had been the most prominent German state for hundreds of years in the First Reich (800-1806) was ousted out of Germany and in 1871 little Germany or the Second Reich (1871-1918) came into being with the Prussian king elevated to the rank of Emperor. (The Austrians would briefly rejoin the Third Reich 1933-1945 though as a junior instead of a senior partner). King Ludwig, definitely against the wishes of his subjects but bought out of his debts by the Prussians, convinced the other South German sovereigns to join the new empire and Wagner jumped upon the wagon. His Kaisermarch starts out well with some interesting melodic ideas and all at once the famous Luther chorale pops up. For a moment the listener thinks he is in Les Huguenots where that same device was so rejected by Wagner. The introduction is a sure fire political statement by the composer as it firmly connects the new empire with Protestantism; one of the reasons Bavarians loathed their new federal state which indeed would start a war with the Catholic Church a few years later and lose it miserably. After some 5 minutes, Wagner’s usual tediousness takes over, his melodic inspiration flags and even Muti’s drive and incisiveness isn’t enough to make the second part more interesting. Wagner’s Huldigungsmarch concludes the concert and is mercifully more brief.
Still even this concert reveals some time honoured Italian traditions. It may be a Gala Reopening of the House but this only means that all that’s visible to an outsider is restored. In reality the stage and the technical equipment were still to be completed and it was only a year later that the opera house really opened with a not very successful La Traviata.
As a TV-producer I had some experience with RAI and I am happy to note that some endearing qualities, a certain sloppiness, have not disappeared. This is a live registration and then some things can happen nobody can control. As there is no shortage of panoramic views I would have thought that several ugly shots, where the view is obscured by someone’s back or even by a lady’s feathers, might be supplanted during the editing process for this DVD; but it was decided to keep these artistic touches.
A hilarious moment comes at the end of the DVD. Often in these programmes, subtitles run along with the last images giving credits to all important collaborators. This is serious business as some people (especially technicians) are very touchy to get their due credits. Either the person responsible for those titles starts them too late or Muti only allowed to have them started the moment he left the rostrum. Anyway, those titles run at breakneck speed along so that everyone gets his credit, though it is impossible to read one single name. For the rest this is a true professional registration with one camera along the orchestra to shoot Mr. Muti’s artistic face. Either the director can read a score or he had help but he anticipates correctly and we get the appropriate player each time there is a solo moment. The sound is clear.
Jan Neckers