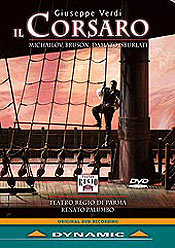 The CD incarnation of this performance, reviewed earlier on Opera Today, faces the formidable competition of an earlier Philips set conducted by Lamberto Gardelli, with Jose Carreras, Montserrat Caballé, and Jessye Norman in the cast. As a recording, that set remains the best recommendation for this neglected (fairly or not) Verdi score.
However, the DVD release of the Parma performance offers enough reward for it to merit attention from more than just those with an affection for early Verdi. Some singers who were not favored by the microphones reveal much more to admire when seen as well as heard. And with a mostly imaginative, attractive production, this incoherent melodramatic folderol comes into focus as a more than interesting predecessor to its great successor, Il Trovatore.
In fact, not only does the plot bear some strong parallels to the later opera (as briefly described in the earlier review of the CD), but the music does as well. The first soprano aria, for the Corsair’s beloved, has a sad, minor key feel that suggests Tacea la notte. The corsair himself opens the opera with an extended scene that musically resembles the great third act Manrico double-whammy of Ah, sì ben mio and Di quella pira, to the extent that the Corsair even ends his cabaletta, joined by chorus, with cries of “all’armi”!
And the nefarious baritone role, here a cruel Muslim warlord named Seid, has his Il balen del suo sorriso moment as well, as he laments his unreciprocated longing for a slave girl. And what a great aria name: Cento leggiadre vergini, translated on the DVD as “A hundred lissome virgins[1]…” And where on earth would one find a hundred of those?
After hearing the unprepossessing CD, the DVD performance comes as something of a revelation. The melodies grow on one, so that suddenly one sits forward and realizes that the score has sunk into one’s subconscious. No, it is not Trovatore, but Corsair’s music provides a very satisfying alternative.
The singers deserve further reevaluation as well. Bruson sounds only tired and strained on the CD. He still is on the DVD, but his dignified, even arrogant bearing fills in the outlines of this character sketch, and helps the listener to forgive the exhaustion of his voice.
The tenor, Zvetan Michailov, has been mauled by a vicious make-up artist, especially as regards his eyes. But his voice is strong and manly, although his acting leaves much to be desired.
Adriana Damato, however, really must be seen to be appreciated. Her middle range is not her glory, and that seems to be emphasized on the CD. Seen and heard live, Damato inhabits the slave girl role fully, with sensuality and pride, and offers some fine singing, especially in the top of her range. Hers is the most successful total performance of the cast.
Unfortunately, the other soprano, Michela Sburlati, does not improve when seen as well as heard. Her wayward intonation and struggle to maintain a line make her role, thankfully brief, rather a trial.
Conductor Palumbo appears to be a young man; on the basis of this performance, many houses should look to him for Verdi. His leadership is sensitive and dynamic as called for, and he gets tremendous playing from a youthful appearing Teatro Regio di Parma orchestra.
As mentioned before, the attractive production finds creative ways to suggest different locales with a minimum of changes, mostly due to effective lighting. Not all the costuming can be praised — Damato appears to be wearing jeans in her final scene, and the Corsair dons a hideous blue jacket. Bruson gets to stride through the performance, however, in some very elegant silks, the caftan equivalent of a white tux. Very nice.
Corsaro is a short opera, about 90 minutes, and the story telling makes Trovatore seem to be a naturalistic masterpiece. The music, however, for any Verdi lover, should not be dismissed. If one has the Philips set, return to it and rediscover some marvelous tunes. If not, take a chance on this DVD. It may be no classic performance, but despite the liability of one disappointing singer, the DVD provides enough pleasure to justify adding it to the collection.
Chris Mullins
Los Angeles Harbor College