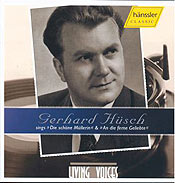 With a masterpiece like Schubert’s Die schöne Müllerin, each generation of singers seems to rediscover the music and make the work its own. The nature of music almost demands that performers arrive at their own approaches, and the resulting differences offer insights into the way the music works and, perhaps, on how perception functions. With something as familiar as Die schöne Müllerin, it is possible to gain some perspective by listening to the way a singers of earlier generations performed the work to sample it, just as aficionados appreciate wine at vertical tastings. By approaching the music in this manner, it is possible to put the differences in perspective by using the nuances as points of reference where interpretations diverge.
As indicated in the notes that accompany this release of performances by the baritone Gerhard Hüsch, this singer was the preeminent baritone in Germany during the 1920s and 1930s. He belonged to the generation before Dietrich Fischer-Dieskau established his own reputation as a performer of the same voice type and with the same literature. Thus, audiences accustomed to Fischer-Dieskau’s various performances might enjoy hearing the style that preceded him, by a highly respected singer from the first half of the twentieth century.
When the paradigm for performance of Die schöne Müllerin involves Fischer-Dieskau’s lyric approach to Die schöne Müllerin, Hüsch’s recording stands in contrast for its more dramatic perspective on the song cycle. At times Hüsch is extremely declamatory, with some passages sung with the conversational phrasing that can come with only a native speaker. The style is vivid and immediate, and it is difficult not to become caught up in the singer’s immersion in the piece itself. The sound seems dated, and the technology involved with this reissue, as admirable as it is, does not restore the ambiance sufficiently not to merit some comment. The piano appears muffled, as if it were covered, and this does not represent well the facile approach that Udo Müller took in accompanying Hüsch. In fact, Hüsch sounds as though he is singing into the microphone, since the accompaniment comes off as a background sound. This aspect of the Schubert recording certain reflects the time it was made (1935), and even two years later, the performance of Beethoven cycle An die ferne Geliebte (1937) sounds incrementally crisper and slightly more refined.
Yet the sound of the recording should not be an impediment to hearing an historic performance, which is critically esteemed. Anyone interested in Schubert reception will find this CD to be of interest, not just as a curiosity, but for the strong interpretations it preserves. While Hüsch may not be as well known as he was in his day, his legacy is worth attention, especially in these legendary performances of these two major pieces of vocal literature. To put the performance of Schubert cycle in perspective, sample a selection of Hüsch’s recording, and then listen to the same pieces from one of Fischer-Dieskau’s, not just the famous 1962 recording, but also the ones from the 1950s and the 1970s. Take it further, with the recording by the fine baritone Wolfgang Holzmair, then move forward to recordings by contemporary performers like Matthias Goerne and Thomas Quasthoff, before retuning to Hüsch to understand his legacy.
James L. Zychowicz
Madison, Wisconsin