First is an 8 October 1954 concert performance in the Large Hall of the Vienna Musikverein. This performance has previously surfaced on other labels specializing in ìliveî recordings, including Gala (GL 100.603). Andanteís new issue of this Carmen is the first authorized release of the master tapes, made by the American-operated radio station, Rot-Weiss-Rot.
The sound of the Gala issue is quite listenable. In fact, the presence and dynamic range are quite striking for an in-performance recording that is more than fifty years old. But the Andante release is far better, with sound that is warmer, better integrated, and more reflective of the Musikvereinís wonderful acoustic. Indeed, this Andante release is competitive in just about every way with commercial releases its era.
And the performance is stunning. Iíve always felt that Karajanís best work, particularly in opera, took place in the 1950s. The technical brilliance of his later interpretations is very much in evidence. But Karajanís opera conducting during the 50s has a fire and spontaneity missing from much of his post-50s work, especially in the recording studio. Performances like the amazing 1952 Bayreuth Tristan und Isolde with Ramon Vinay and Martha Mˆdl (available on several labels) and this Vienna Carmen represent opera conducting at the highest level.
Karajanís pacing of this opera seems just about ideal. The lengthy opening scene preceding Carmenís entranceóinterminable in some other performancesóhas momentum, color, and a real sense of atmosphere. Throughout, Karajan works admirably with his singers, giving them ample room to make expressive points, but never at the expense of the operaís inexorable progression to its tragic resolution. The climaxes are all judged for maximum effectótry, for example, the hair-raising conclusion to the opening of Act II. Karajan also elicits gorgeous playing from the Vienna Symphony, notable for its precision and admirable presentation of Bizetís colorful orchestral palette.
The cast is first-rate as well. The Carmen, Giulietta Simionato, was at the height of her powers during these performances. The Italian mezzo is neither the most Gallic nor subtle of Carmens. But there is no denying the beauty, power, and absolute security of her voice. This is certainly one of the more impressively sung Carmens on disc. And there is more than enough dramatic involvement and character development by Simionato to make her Carmen of a very high level, indeed. Since Giulietta Simionato never made a commercial recording of Carmen, this release takes on even greater value.
The Don JosÈ is the Swedish tenor, Nicolai Gedda. Typical of this superb artistís work, Gedda is a master of French diction and style. Gedda, twenty-nine at the time of this recording, is also in his freshest and most beautiful voice. But he has more than enough vocal heft and metal to do justice to JosÈís more dramatic moments, most notably the conclusions of Act III and IV. As much as I like Geddaís Don JosÈs in the EMI recordings with de los Angeles and Callas, I give the nod to this Vienna performance for its almost ideal balance of vocal beauty and dramatic fire.
Soprano Hilde G¸den is an absolutely exquisite MicaÎla. Baritone Michel Roux is wonderful as the bullfighter Escamilloóvirile, suave, and vocally assured. The various subsidiary roles, taken by highly accomplished and well-known singers of the era, add to the special quality of this Carmen.
The Vienna performance features Ernest Guiraudís sung recitatives in place of the original spoken dialogue. Karajan inserts excerpts from Bizetís incidental music to LíArlesienne in the operaís final act, I assume as ballet accompaniment. The CD booklet contains essays on the production, photos, track listings, and a French and English libretto. All in all, this is a superb Carmen that Iíve already listened to several times, and will return to often, Iím sure, with great pleasure. 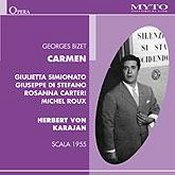 On 18 January 1955, Karajan again conducted Carmen, this time at the La Scala Opera House in Milan. In addition to Simionatoís Carmen, the Escamillo, Le Dancaire, Le Remendado, MoralËs, Frasquita, and MercÈdËs are all alumni from the Vienna performance. Here, Karajan mixes spoken dialogue with the Guiraud sung recitatives.
Iíve previously heard this La Scala Carmen on a Music and Arts LP release. There, the sound was harsh, congested, and subject to distortion and pitch fluctuation. The MYTO CD issue does not seem much betteróin fact, it may well be a transfer of the M&A LP set. The MYTO release includes no libretto, just a brief essay, track listings and a few photos. As a result of its packaging and fairly wretched sound, the La Scala Carmen will probably be of interest to the most tolerant collectors.
So, is there any reason to purchase the MYTO La Scala Carmen, particularly with the availability of the superb Vienna performance? Fans of the lovely Italian soprano Rosanna Carteri will welcome the opportunity to hear her well-sung and acted MicaÎla. But the major asset of the La Scala performance is the Don JosÈ of Giuseppe di Stefano. By this stage of his career, di Stefano was branching out from the lyric repertoire to more spinto and dramatic roles, Don JosÈ included. Opera lovers will continue to debate forever whether di Stefanoís move to heavier repertoire hastened his vocal decline. But few will disagree that he gave some spellbinding performances in the more heroic roles.
This Don JosÈ is one of those performances. Di Stefano was always very much at home in French opera, both in terms of style and language. Here di Stefano is in his finest voice for the period, the middle of unsurpassed beauty and the upper register ringing and secure, if on occasion just a bit open and forced. But perhaps even more impressive than the basic vocal equipment is the way di Stefano employs it. As I listened to the tenor launch the soaring principal melody in the Act I duet with MicaÎla, I could almost imagine that Bizet composed it specifically with di Stefano in mind.
Dramatically, di Stefano is an absolute master at depicting JosÈís path to ruin. The ìFlower Songî is both gorgeously sung and a compelling portrait of JosÈís obsession with Carmen. The finales of Act III and Act IV are delivered with a frightening intensity (here, credit must be given to Simionato and Karajan as well). Overall, di Stefanoís interpretation of Don JosÈ is as persuasive as Iíve heard. In the final analysis, it may well justify purchase of this MYTO set, sonic warts and all.
Ken Meltzer