For many years now people have been laughing with the queer and often unintended humorous translations in the interesting issues produced by Bongiovanni; but their records are made on a shoestring budget. La Scala has more means, witness the designer cassette this DVD is wrapped in, but money for good translators still seems to be scarce. The English text of the booklet consequently uses the word ìsymphonyî when an ìovertureî is meant (sinfonia is either overture or symphony in Italian). The booklet, too, reproduces a photo of the playbill of the evening which clearly proves whose show it is. The name of conductor Riccardo Muti is printed in exactly five times the size Freni and the other singers get. And of course the camera is fixed for lots of time on the face, hands and body language of the conductor; and I cannot say it is a sight I much enjoy. Not that Muti collapses in hysterics or throws tantrums; just that I think he strikes poses. I donít believe in conductors who in a concert of separate arias, overtures and choruses act as if they have reached another world, even another cosmos where they are deciphering the innermost secrets of the human condition. Looking at Muti who often conducts with his eyes closed reminds me too much of Karajan who introduced this kind of close-up. 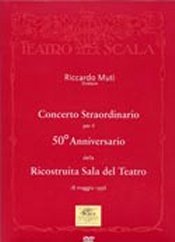 Muti was at the height of his powers (as a conductor and theatre boss) when this concert was recorded nine years ago. He is more than ably assisted by orchestra and chorus who play at their best; and La Scala at its best is indeed outstanding. When one hears the chorus singing as if each of its members is a great soloist in its own right and yet blending the sound, one realizes how less exciting and musically strong most other opera choruses are. In this aspect the La Scala Chorus (and probably its orchestra as well) is its own worst enemy as the unions have always been asking for so much money that most gramophone companies preferred cheaper help and we are all the poorer for it.
As the title tells this concert is something of a re-enactment of the famous re-opening in 1946 after allied bombs had destroyed the house three years earlier. That concert is now more famous for the legendary discovery of a young new exciting soprano, Renata Tebaldi, than for the return of Toscanini. He placed the soprano who had to sing ìvoice of heavenî during a rehearsal of the Te Deum at the top of the chorus because ì I want this voice of an angel to truly descend from heavenî. Thus was born the still continuing legend that Toscanini said Tebaldi had the voice of an angel.
Muti, the booklet tells us, gives us the same programme with one exception. He replaced the ìLa Gazza ladraî by the William Tell overture, no reason is given, though I have an inkling the conductor feels it is a better vehicle for a star of the first magnitude like himself. Anyway it must be admitted that it is a fine and spirited performance. Nevertheless there are far bigger differences with the original concert. Toscanini didnít give ìLa vergine degli angeliî from Forza as Muti does and the older conductor had the whole of act 3 of Manon Lescaut performed after the intermezzo from the same opera. That act is deleted here and the ubiquitous intermezzo is followed by one aria, the ìIn quelle trine morbideî from the second act. This may make this DVD somewhat more interesting as it gives the real star of this evening more to sing. Mirella Freni looks decidedly somewhat old in a not very flattering gown but the 61year old soprano is in fabulous voice singing all soprano parts (in 1946 apart from Tebaldi there was Mafaldo Favero) except those few angel-phrases. There is not a hint of breathiness and the famous silvery sound is there from bottom to top, easily riding the concertato in the MosÈ prayer and dominating the Forza scene with chorus and bass. Sam Ramey is a fine Mefistofele in the prologue in a role he always performed well. The wobble that so marred many of his later performances was absent and he cuts a convincing figure as well.
This DVD originally was a TV registration and by now we already know that directors either can read a score or have an assistant next to them who points out which instrument is coming on so that everything runs smoothly without abrupt changes or pointless zooms.
The Venice DVD has somewhat more to look at but my first thought went to the music and I wonder why conductors show so little fantasy in some of these galas. Of course they need not play Alban Berg in a New Yearsís Concert but even in those surroundings it could be possible to have something else than once again the Manon Lescaut intermezzo or the ìVa pensieroî. The star of the evening is 80+ French conductor Georges PrÍtre who even starts the DVD by playing a few phrases from an operetta he wrote 50 years ago. But for the rest, PrÍtre seems to be an older Muti; he too looks like he is trying to resolve all human mysteries while conducting arias and intermezzi he has probably conducted hundreds of times and which can be played by the orchestra as well without any conductor at all. At the same time the TV director has no problem giving us a shot of the tenorís back during most of ìNessun dorma.î
In Europe it has now been a tradition for more than 40 years that on the first of January all public TV-stations broadcast the Vienna Philharmonic New Yearís Concert with mostly Strauss-music. This has slowly become big business and, where for many decades Willy Boskovsky, the orchestraís Concertmeister, conducted his colleagues, some twenty years ago famous conductors started to kill for the honour and the exposure of conducting this concert (Maazel, Muti, Harnoncourt etc). From simple music making, this show has now become an opportunity to show clips with ballet and Vienna tourist traps while the orchestra plays on. And now the Viennese have some competition from the Venetians who use the same tricks ó some shots of the city and three nice and very traditional ballet items mostly danced in the splendid building of the restored La Fenice, while an Asian girl dances on her own with the chorus humming along in the Butterfly ìcoro a bocca chiusa.î The sung pieces are somewhat rare: a rather provincial ìNessun dormaî by Albanian tenor Gipali and a better Butterfly aria by soprano Annalisa Raspagliosi. And then we go for a half-hour of popular orchestral opera pieces before everything ends with the inevitable ìLibiamoî from Traviata. Then the 60 minutes of this concert are over and the happy few who assisted (and are sometimes taking photographs from their boxes) can run to the reception. Probably Iím a little too severe as it is a nice souvenir of the theatre and the orchestra and chorus and the picture quality is excellent. 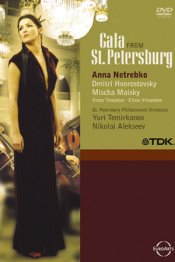 But it is understandable that in a world of clichÈs the St. Petersburg concerto comes somewhat as a relief. The people in the Philharmonic Hall donít wear gowns or tuxedos and their dresses, faces and bodies show that most of them do not belong to the jet set. The principal conductor behaves like a normal being, concentrating on his music without pulling strange faces. He lustily applauds with everybody else after a good solo and when he only gets one kiss from Netrebko he almost bows double to get a second one. All the time the sphere is very relaxed and conductor and soloists laugh, make small jokes and amuse themselves and there is less stiffness on the scene than in the clean but sceptic Western concerts. Still there is a lot of good music-making and, though it is not exactly unhackneyed repertoire, it is somewhat refreshing after the Italian perennial favourites. Victor Tretyakov plays a fine Saint-SaÎns piece and Elisso Virsaladze proves that her left hand is not her weakest in the Ravel concerto. But it is violoncellist Mischa Maisky who really steals the show with some warm and inspired tone in Respighi and Bruch. And of course there are some singers as well. Anna Netrebko looks far more like a (beautiful) young Russian with less than perfect skin than in the babe-like video registrations from the West. And she wears the same outfit before and after the intermission. The voice is clear, sweet and bell-like and resembles young Mirella Freni a lot, as it is a brilliant lirico with coloratura facility. A pity for us she only sings Italian arias, though maybe her Russian public appreciates this more than we do. I like the small mistake at the end of the first strophe of ìquando rapitoî as it proves there is no tampering with the recording as some stars nowadays routinely demand in a commercial registration. The voice of Hvorostovsky is becoming more dramatic and voluminous as I noted myself a few years ago in Antwerp. The sound is less youthful but completely homogeneous; and there is a new depth in the lower register so that this fine Onegin has no problems with the bass aria of Prince Gremin. The duet between Silvio and Nedda is passionately sung and acted as well. All in all a nice concert to while away two hours.
Jan Neckers