Vaughan Williams created his own musical speech out of an amalgamation of nineteenth-century Romanticism and modally-inflected figures that marks it as uniquely his own. Ives, on the other hand, is known for the twentieth-century cast to his music in which free dissonance plays a large role. That said, however, Ivesís eclectic musical rhetoric goes well beyond this simple categorization to include past, present, and (though he may not have given it much thought at the time) future as well.
The songs in these two collections, however, link RVW with Ives, for both composers brought English and American art song into the twentieth century, forever breaking with the classical song traditions of their respective youths: Vaughan Williams from Edwardian England and Ives from the sentimental nineteenth-century American song. Most of the songs in these two recordings date from the first two decades of the twentieth century and illustrate well those changes.
That the songs of RVW are better known than those of Ives is not in doubt. Perhaps this is because many may not yet have heard baritone Gerald Finleyís recent recording of these Ives pieces. Audiences have rarely had the opportunity to hear such superb singing of Ives. Add to this the dynamic, always sensitive, accompanying of Julius Drake and the result is one of the finest recorded tributes ever paid to Charles Ives. The thirty one songs that Finley and Drake have included constitute about one-fifth of Ivesís output and cover an astonishing range of moods, subjects, and musical language. Eclectic is the perfect word for these songs. Here is music modeled on that of nineteenth-century German romantics, a song about a cowboy, a fiery evangelist, the reclusive Henry David Thoreau, the bittersweet memories of youth, and of an eagle and a vampire, to mention only a few. The Romantic Ives, evident in such songs as Feldeinsamkeit, Weilí auf mir, and Ich grolle nicht will surprise those listeners who know Ives primarily from his thornier songs like The Cage and Where the Eagle. If one thinks only of a common image of Ives as a curmudgeonly old bearded man with a cane, the poignancy of words and matching music in Tom Sails Away and The Greatest Man will come as a revelation. The humorous Ives turns up in The Side Show, where a musical quotation from Tchaikovsky underlines the moment when ìpoor Mister Riley look[s] a bit like a Russian dance.î For sheer loveliness and gentleness, it is hard to beat The Housatonic at Stockbridge and Remembrance. Then there is General William Booth Enters Into Heavenóa song that is undoubtedly Ivesís masterpiece. Ivesís music and poet Vachel Lindsayís words evoke the founder of the Salvation Army, this ìgreat preacher of redemptionî in what becomes an operatic scene in its dramatic juxtapositions of moods and emotions. 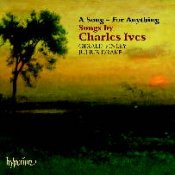 Gerald Finley is a master at capturing the many moods of these songs, his interpretations matching perfectly Ivesís music, from its quirky moments to those of incredible serenity and loveliness. Pianist Julius Drakeís performance complements Finley at every move. The combination of Finley, Drake, and Ives in A SongóFor Anything. Songs by Charles Ives will surely succeed in bringing new audiences to the songs of Ives and in reaffirming to Ivesís aficionados his stature as a major vocal composer of the twentieth century. It is difficult to imagine a finer recording of this music. Finley and Drake have set a very high standard for future interpreters of Ivesís songs.
What Gerald Finley and Julius Drake do for Ives in A SongóFor Anything, Roderick Williams and Iain Burnside accomplish on behalf of Ralph Vaughan Williams.in their performance of twenty songs of this great English composer. The nine Songs of Travel, to texts by Robert Louis Stevenson and six of Dante Gabriel Rossettiís poems in The House of Life scarcely need an introduction, having been recorded numerous times; this is equally true of the ever-lovely English folk song, Linden Lea. Williams and Burnside perform with such artistry in this recording for The English Song Series, however, that the songs sound fresh. Bright Is the Ring of Words and Silent Noon, for instance, recipients of too many hackneyed performances as staples of young singersí repertoires, become magical once again to the listener; one hears them as if listening to them for the first time. I found myself surprised at how moving their magic can be in the magnificent voice of Roderick Williams and in the pianistic artistry of Iain Burnside.
Regrettably, the Four Poems by Fredegond Shove are not well known. They date from 1925ósettings of words by the niece of RVWís wife, Adeline. While the composer treats the texts to more word-painting than one finds in his settings of Stevenson and Rossetti, his musical language is one with that found in those earlier songs. These songs should be better known than they are.
Roderick Williamsís masterful performances of these twenty songs rank with the best of Ralph Vaughan Williamsís many interpreters.
Clayton Henderson
Saint Maryís College
Notre Dame, Indiana