(Oh, all right, I admit it, the convenience of CDís has long outweighed any attachment I could possibly have to the benefits some audiophiles hear in analog, and I have kept my vinyl collection around, to the despair of those who have had to help pack and move my belongings, to hear performances that arenít available on CD or that I canít justify buying again on CD. True audiophiles, and you know who you are, will probably have to read another review to find out just how good the sound quality of these SACDís is or isnítóalthough if you read on, I can give you some clues.)
So when I put the Mozart concert arias into the CD player and heard once again the radiance of Amelingís performance with the English Chamber orchestra, there were two of me listening to it: my mature self determined to make an objective assessment, and my much younger self, falling in love all over again with Mozartís arias through a voice that at the time I thought of as the ìdefinitiveî lyric soprano. Years later, having sung (after a fashion) most of these pieces in voice lessons and opera workshops, I still canít help thinking of her performances ìYes, thatís how they should be sung.î My more experienced ears tell me that there are more intrinsically gorgeous voices around, but the diction, phrasing, and breath control are all admirable, along with a grace and elegance that, for me, really bring this beautiful music to life. The Mozart selection includes many of the most familiar arias of Zerlina, Cherubino, and Susanna, from Don Giovanni and Le Nozze di Figaro, along with ìCome Scoglioî from CosÏ fan tutte, the difficult runs and skips of which she navigates very competently. The concert arias include the tour de force ìChíio mi scordi di te?î with Dalton Baldwin providing the thrilling piano obbligato that Mozart wrote for himself to play as Nancy Storace, for whom the aria was written, bid farewell to Vienna. The rest of this disk consists of music Franz Schubert wrote for various projects for the stage that never were very successful. Amelingís performance of them with the Rotterdam Philharmonic Orchestra make it clear that the projectsí failure to enter the repertoire was not due to the music. While the two pieces from Goetheís Claudine von Villa Bella are better known as lieder in their piano transcriptions, there are also some more substantial arias, and all of this music shares the disc with Mozartís arias very comfortably. 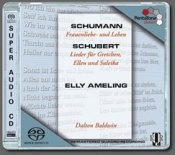