Although Poulenc (1899 ñ 1963) had realized in the late 1920s that he was homosexual, the death of Ferroud triggered his return to Catholicism. Despite Poulencís renewed commitment to the faith of his childhood, his relationship with religion was a conflicted one. Additionally, Poulencís tendency toward intense melancholic emotions was further exacerbated by World War II.
Recently two recordings have been released on CD that feature two of Poulencís most highly acclaimed works, each of which reflect themes of religion and war, though the recordings couldnít be more different from one another. Ponto has released a remastered recording of Dialogues des CarmÈlites (1953 ñ 6) performed by the Vienna State Opera on Nov. 8, 1961 under the baton of Berislav Klobucar; and Harmonia Mundi presents several of Poulencís works for a cappella choir, including Figure Humaine, performed by the RIAS-Kammerchor conducted by Daniel Reuss.
The Vienna State Opera recording of Dialogues des CarmÈlites (Die Gespr‰che der Karmeliterinnen) is a slice of history on a CD. The recording, which includes Emmy Loose as Blanche, Elisabeth Hˆngen as the old Prioress, Hilda Zadek as the new Prioress, and Christel Goltz as Mother Marie, is a live recording replete with audience noise and applause. The Ponto label, owned by Mitridate, specializes in releasing unique live recordings that are not otherwise available on CD. In this day of digital touching-up and pristine production, it is refreshing to hear artifacts of live performance on a recording. While it is disconcerting to hear Dialogues sung in German instead of French, one need only consider that the opera was premiered in Italian at La Scala to be reminded that ìauthenticityî in performance is ever unattainable.
The enthusiast will likely be frustrated by the lack of information in the booklet that accompanies the two-CD set. Limited notes on the circumstances of the operaís composition, a synopsis of the opera, and bios of the lead singers are provided in English by Andrew Palmer. However, the tracks are labeled in only by their German titles, and there is no libretto, in German or otherwise. Furthermore, there is no information on the specific circumstances surrounding this particular production of Dialogues by the Vienna State Opera. The operatic voice fanatic, however, will be delighted to have some of the greatest women to sing at the Vienna State Opera on a single recording. Unfortunately, a cursory search of several major record retailers indicates that this recording may be difficult to track down should one want to purchase it. Mitridate appears to be based in the Netherlands, and only has one distributor listed, also apparently in the Netherlands. [Editor’s Note: Ponto is distributed in the U.S. through Qualiton Imports Ltd.] 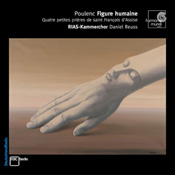 In contrast, RIAS-Kammerchorís recording of Figure Humaine and other of Poulencís choral works is highly accessible in all senses of the word. Daniel Reuss directs this highly polished performance of Poulencís Sept Chansons (1936), Un Soire de Neige (1944), Figure Humaine (1943), Quatre Petites PriËres de Sainte FranÁsis díAssise (1948), and Chanson ‡ Boire (nd). These performances are simply wonderful: Each piece is sensitively interpreted and beautifully textured. Reuss and his choir do a stunning job of presenting Poulenc in all his seriousness, melancholy, and concern for humanity. The final work is a short coda to the rest of the CD; Chanson ‡ Boire is a drinking song that reveals Poulencís more light-hearted and mischievous side.
The album contains brief program notes by HervÈ LaCombe that situate Poulenc as a member of Les Six and as a first-class setter of poetic texts. In addition, LaCombeís notes and all the texts of the songs are included in the booklet in French, English, and German, as well as information on the RIAS-Kammerchor and photos of the choir and Reuss. Paul Eluardís surrealist poetry was Poulencís gateway to recovering his Catholic spirituality, and this debt is apparent in that the first three works on the recording are settings of texts by Eluard (Sept Chansons contains texts by Apollinaire in addition to Eluard). Furthermoreóand luckilyóthe CD is available widely from retailers. Aficionados will appreciate this the new availability of some Poulencís music that is not too frequently recorded. Someone who is not familiar with Poulencís music will find this recording to be a delightful introduction.
Megan Jenkins
CUNY ñ The Graduate Center