And with this brand new production of
Monteverdi’s “Il Ritorno d’Ulisse in patria” (The
Return of Ulysses) in collaboration with the Royal Danish Opera, staged in
WNO’s stunning new theatre at the Millennium Centre in Cardiff, both
sentiments are upheld. “In these stones horizons sing” is
blazoned in huge letters across the gleaming metal carapace of the new
building; words that Monteverdi himself might have set to music. It is an
exciting and challenging greeting to any visitor, and WNO did not
disappoint. 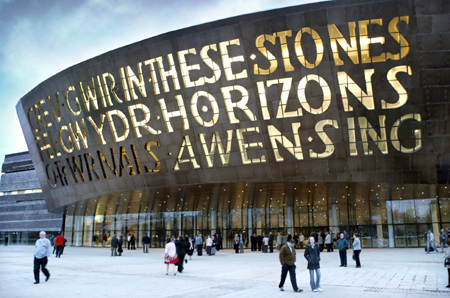 The genius of Monteverdi’s free-flowing music drama is powerfully
displayed and faithfully reincarnated by two of today’s most brilliant
exponents of baroque opera, director David Alden and conductor Rinaldo
Alessandrini. Alden’s trademark wit and visual quirkiness is certainly
present, yet his solid-seeming but softly-glowing sets always support, not
detract, from the epic story that unfolds of the wandering hero and his loyal
but beleaguered wife. Alden knows exactly when to interpolate the occasional
visual joke, or dramatic flourish, yet when the music demands he steps back
and gives it and the singers time and space. “Ulysses” is
essentially an ensemble opera, and Alden is quoted as saying that his joy in
working on it comes partly from the opportunity it gives him to work with,
and be integrated with, not only the singers but the musicians as well. If
there’s a caveat to his work here it is that he seems unable to resist
the almost-obligatory rather sleazy bit of simulated sex from time to time;
as with any stage business or comedy, there’s a fine line between joke
and boorishness and at times he oversteps it.

However, the integration he speaks of is there for all to see and hear,
for equally assured and committed to the brilliance of the old master’s
musical invention is Rinaldo Alessandrini in the pit (and on harpsichord
continuo) with the WNO’s own fleet-footed orchestra augmented for this
production by some six or seven period instrument performers, including the
now-essential theorbos. They, together with the baroque cello and harp
support much of the vocal story telling and it was obvious that an
intensely-felt rapport between director, musicians and singers had developed
over many days rehearsal. What is left of the original score of 1640 is of
course but bare bones – it is up to today’s directors and singers to
extrapolate, interpret, and ornament. Last night’s music was
spring-heeled and alert, subtle and elegantly attuned to the ever-changing
moods of the characters and the mainly youthful band of singers also showed
extraordinary command of the vocal idiom.

Although an ensemble opera, there are some characters whose place and
import are crucial and here the production was graced with two extremely
gifted and dramatically assured singers. The very experienced tenor Paul
Nilon took on the title role of the wandering hero, twenty years away from
his noble and loyal queen, Penelope, sung here by the richly voiced mezzo
soprano Sara Fulgoni. Nilon showed his usual attention to text and detail and
his great experience of the idiom, although he is far from being an early
music only specialist. His quite soft-grained tenor is so characterful and
expressive one sometimes forgets that he is singing, not speaking, yet when
needed in moments of high drama such as the hero’s fateful shipwreck or
final battle with his would-be usurpers, Nilon musters both thrilling power
and heroic tone to great effect. Matching him in dramatic tone, Fulgoni gives
us another sort of heroism: that of Penelope’s almost obsessive
fidelity to her long-lost husband. Her mix of physical cool regality and warm
dark passion simmering below was masterly.

The supporting 16 characters who weave their way in and out of the story,
each displaying an aspect of the human (or divine) condition, were sung well
and sometimes excellently so by this quite youthful cast – in fact the
standard of both vocal and stage technique was so high that it was
heart-warming to think that in the oft-maligned garden that is British opera
there are many good young voices pushing up through to the sunlight of
international success. Those that caught the eye on opening night included
Sarah Tynan, soprano, as Melanto, Iestyn Davies, countertenor, as Human
Frailty/Pisandro, and Ed Lyon, tenor, as Telemacho; the latter’s
beautifully sung contemplation on the beauty and tragedy of Helen of Troy
being particularly memorable.

For a first night, the production seemed to go extraordinarily smoothly,
despite some complicated special effects and “sets within sets”
whenever the divine but definitely lubricious gods and goddesses became
involved, and this was perhaps a direct result of WNO’s declared aim to
give its singers and musicians plenty of on-set rehearsal time. Peter
Bellingham, WNO’s Executive Director, told me during the single
interval that this was one of the greatest benefits of their move just 18
months ago from their old cramped premises to this beautiful, spacious new
building, as they now had not only three separate rehearsal spaces for
musicians, singers and chorus but also had access to all the sets and
practical devices throughout the rehearsal periods. This writer can confirm
that the audience is equally well served by an auditorium that frankly takes
the breath away upon entering – it was akin to entering some great warm cave
deep inside a mountain, its walls appearing carved from solid blocks of
purple hued slate, separated by gently curving horizontal strata of gleaming
wood that are the balconies and slips. What isn’t Welsh slate
(strangely silky to the touch) is honey-coloured wood (the seats, floors,
doors) or Welsh wool (traditional tweed upholstery to the seats). The overall
effect is a kind of natural sumptuousness, a Celtic chieftain’s palace
perhaps, far removed from the painted and gilded houses of London, Europe,
and the USA. And even more important, the acoustic has a clarity and
brilliance that, I’m told, singers and musicians appreciate and which
translates to all reaches of the building.

As Welsh National Opera enter their anniversary season, they have here a
new production, and a new house, that they can be proud to show the world.
The stones are truly singing, and their horizons can only become wider.

“Il Ritorno d’Ulisse in patria”, at the
Millennium Centre, Cardiff on 23rd September and then on tour to Oxford,
Llandudno, Birmingham, Bristol and Southampton.