Directed by Mikael Eliasen, internationally renowned vocal collaborator and coach, the Curtis Opera Theatre trains around twenty-five singers, ages 18-28, each year in the Bachelor of Music, Master of Music, and Professional Studies programs. Students from around the world audition, singing four to five selections from opera, oratorio and art song, depending on the desired program. Many audition, but few are accepted to pursue this elite training.

A scene from Albert Herring 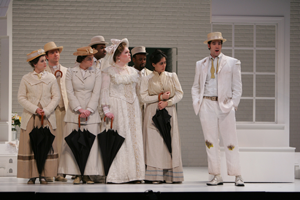 What makes this program cutting edge is its emphasis on musical and dramatic values, offering weekly classes in movement, repertoire, make-up and foreign language diction, along with performance seminars lead by Eliasen. Students also receive three hours of vocal coaching each week, as well as additional language classes.

A scene from Albert Herring 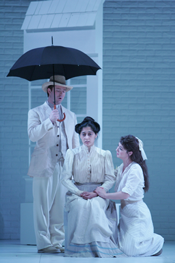 In addition to such diversified classes, students have a chance to apply what they learn in the studio to the stage. Each season Curtis presents fully staged performances, as well as concert productions, in halls such as the Prince Music Theater, Perelman Theater at the Kimmel Center for the Performing Arts, and the Curtis Opera Studio. This yearís offerings include LíOrmido by Francesco Cavalli, The Audition, based on Mozartís Impresario, Pucciniís La Rondine, and Postcard from Morocco by Argento. Singers also appear in the Field Concert Hall Student Recital Series and in concert performances with the Curtis Symphony Orchestra.

With such extensive training and performing experiences, it is no surprise that more than sixty alumni have sung with the Metropolitan Opera, and Curtis graduates can be found singing on stages worldwide.

Cick here for information on this year’s performances at the Curtis Opera Theatre.

All photos by David Swanson

[Editor’s Note: This is the first in a series of articles on music education relating to opera and vocal music.]