The occasion was a special pre-performance event designed to offer local people the chance to get an insight into the operas that the Company are currently showing, and in this case it was Handelís great drama ìTamerlanoî written in that miraculous period of his life, 1723-25 when he also produced ìGiulio Cesareî and ìRodelindaî. They call the series ìOpera Unwrappedî and judging from the example last week, it is a resounding success.

The format is simple: the audience are invited to attend, for free, for an hour in the early evening prior to a performance that they may, or may not, be attending. All are welcome – on this occasion there were school children of about 8 or 9, and all ages above – and the musicians are members of the regular orchestra and the singers are the understudies, or covers for the first cast. What is essential is an excellent communicator as host to guide proceedings and explain what is being seen, and Scottish Opera certainly had that in Mark Hathaway, staff producer and assistant to the operaís director John la Bouchardiere. He had the sort of engaging charm and self-deprecating wit that everyone responded to immediately – no High Artiness here.

In an hour, young and old in the audience were given a quick but informed resume of the baroque opera form, Handel and his times, the castrati and todayís countertenor voice, the de capo aria and – to the delight of the kids – how to replicate an angry tyrant spraying a room with machine-pistol bullets. That went down particularly well and judging by their faces in a box above me, it was a real ìshock and aweî success. On the subject of the countertenor voice, our host invited second-cast Robert Ogden to demonstrate the entire range of his voice, from the top of his falsetto to the bottom of his root baritone voice – again this drew appreciative applause and much comment. It also presumably cleared up any lingering misconceptions about the singerís masculinity that might have remained in the minds of those not yet familiar with the voice-type. Some more insights into high-level work in the set and safety lines – demonstrated by a brave soprano – concluded the entertainment, and entertaining it certainly was, judging by the buzz of fascinated and positive reactions all around the auditorium. 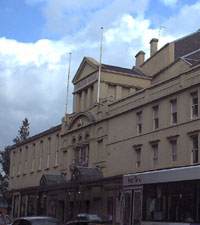 Many opera houses already have outreach programmes, and pre-performance talks, but this most open and democratic of formats which encourages people to just pop into the theatre after work, or school, seems to work particularly well as a blue-print for extending and deepening the companyís relationship with its local population.

Anyone who saw the little nine year old girl leaning over the balcony and studiously mimicking the conductor as he guided the orchestra through a lively ritornello, or watched the twelve year old boy riveted by Tamerlanoís furious outbursts and gun-toting in Act Three, could only assume that they, at the very least, went home wanting to come again one day to the magical world of opera. Let us hope that Scottish Opera will still be there for them.